Between heaven and earth: A celebration of CoBrA art

The Carl-Henning Pedersen & Else Alfelt Museum (CHPEA) is celebrating the 70th anniversary of CoBrA – which stands for Copenhagen, Brussels and Amsterdam – with not just one, but four new exhibitions. Exploring Henning Pedersen’s preparations for the redecoration of Ribe Cathedral, as well as Else Alfelt’s interest in Zen Buddhism, the exhibitions convey the width and originality of the two CoBrA artists.

Known for its fairy-tale like settings and outstanding collection of works by CoBrA artists Carl-Henning Pedersen and Else Alfelt, the CHPEA Museum in Herning is visited by fans of CoBrA art from all over Europe. Thus, it is only appropriate that the anniversary of the international CoBrA group’s foundation should be celebrated with a big ado. Under the headline Sans og Samling [a Danish term referring to the common sense that one loses when excited or drunk, but also directly translated as “sense and collection”), the celebration contains four exhibitions with works from Pedersen and Alfelt. Museum Director Lotte Korshøj says: “With Sans og Samling, we wish to celebrate the CoBrA movement by placing a renewed focus on the museum’s own CoBrA artists, Carl-Henning Pedersen and Else Alfelt, so unlike other previous celebrations of CoBrA it’s not the artist group in its entirety that’s being explored. Instead, we highlight features of Alfelt and Pedersen’s work which reach right into the essence of CoBrA and mark their contribution to the multifaceted artistic movement that CoBrA was.”

While all four exhibitions show work by Pedersen or Alfelt, each is very distinct. The first, Between Heaven and Earth, focuses on Carl- Pedersen’s preparations for the redecoration of Ribe Cathedral; the second, Flower of the Universe, explores Alfelt’s fascination with Zen Buddhism; while the third, Volière/Fuzzy, fuses the media of music and painting presenting an electro-acoustic piece inspired by Pedersen’s paintings, created by Danish composer Fuzzy. Opening in late September, the fourth exhibition will, with work by Pedersen and Dutch painter Eugène Brands, explore the wider scope of the CoBrA movement. 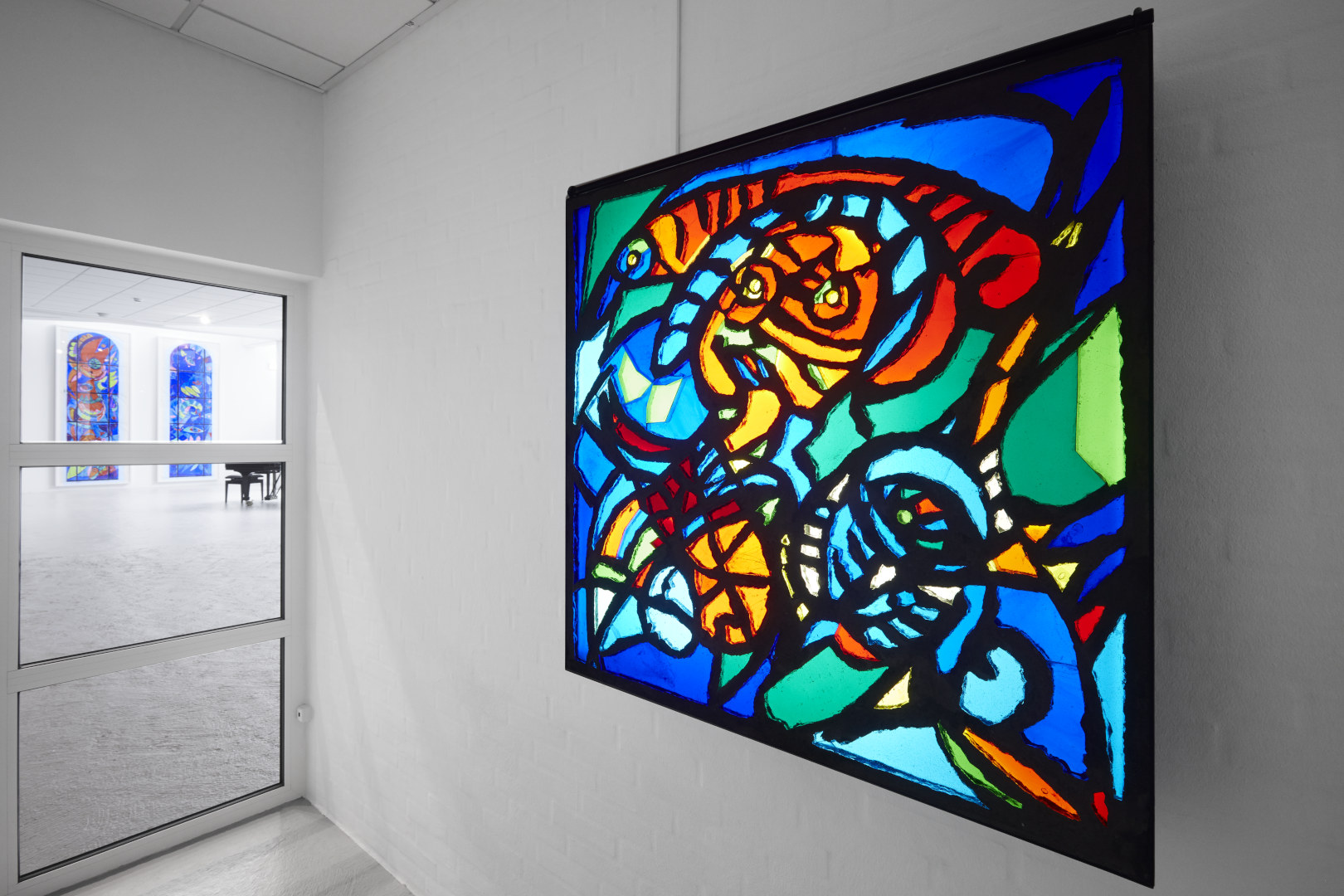 TO CELEBRATE THE 70TH ANNIVERSARY OF COBRA, THE CHPEA MUSEUM IS PRESENTING FOUR NEW EXHIBITIONS WITH ART BY CARL-HENNING PEDERSEN AND ELSE ALFELT

It is fair to say that it caused quite a stir when, in the early 1980s, Pedersen was asked to redecorate Ribe cathedral, Denmark’s oldest cathedral. A heated debate on the church and modern art ensued, and, even today, the appropriateness of the murals is still disputed. Between Heaven and Earth presents a selection of the sketches and notes the artist made in his preparation for the work. Some of the sketches only recently reappeared and have never been publically exhibited before. “The rediscovery of the sketches was a great surprise and joy – a quite unique find,” says Korshøj. “After Pedersen’s death in 2007, many works sketches, photos and notebooks were accepted into the museum’s collection. We haven’t had the chance to study all the works yet, and these sketches just happened to pop up during the preparations for the anniversary exhibitions; it was an amazing discovery, almost too good to be true.”

Carl-Henning Pedersen also left behind a diary containing his thoughts and concerns during the time of the Ribe decoration. “A church painter I will never be”, he writes in the diary. Nonetheless, as the exhibition demonstrates, the artist not only came well prepared for the task but also, as was characteristic for his way of working, worked from the inspiration of the moment.

ONE OF THE CHPEA MUSEUM’S ANNIVERSARY EXHIBITIONS IS FLOWER OF THE UNIVERSE, A SERIES OF WORKS INSPIRED BY ELSE ALFELT’S FASCINATION WITH ZEN BUDDHISM

A very different view of religion is explored in Elsa Alfelt’s exhibition Flower of the Universe. Inspired by the artist’s travels in Japan and her fascination with Zen Buddhism, the exhibition presents a series of colourful meditative paintings created by Alfelt in the 1960’s. The works are presented in a way that aims to encourage viewers to move into a meditative contemplation. “You can’t view the works of Alfelt in the same way that you would view a work by, for instance, Asger Jorn, or Pedersen. She has an altogether different approach, it’s almost a form of nature mysticism,” explains Korshøj. “She created 100 works all named Flower of the Universe and all almost identical. They’re all spirals of the same size and shape and that means that the meaning quickly runs empty. If you look at them looking for a story, you’ll be looking in vain. But if you look at them from a Zen Buddhist viewpoint, you’ll realise that the meaning of the work is not supposed to come from the painting itself, but from within you. It’s about using the image to access your own inner consciousness.”

In line with this thinking, the museum will also offer a number of meditative yoga classes in the exhibition space, and the Zen garden created by Alfelt for her original exhibition is recreated so that visitors can create their own perishable artwork in the sand. 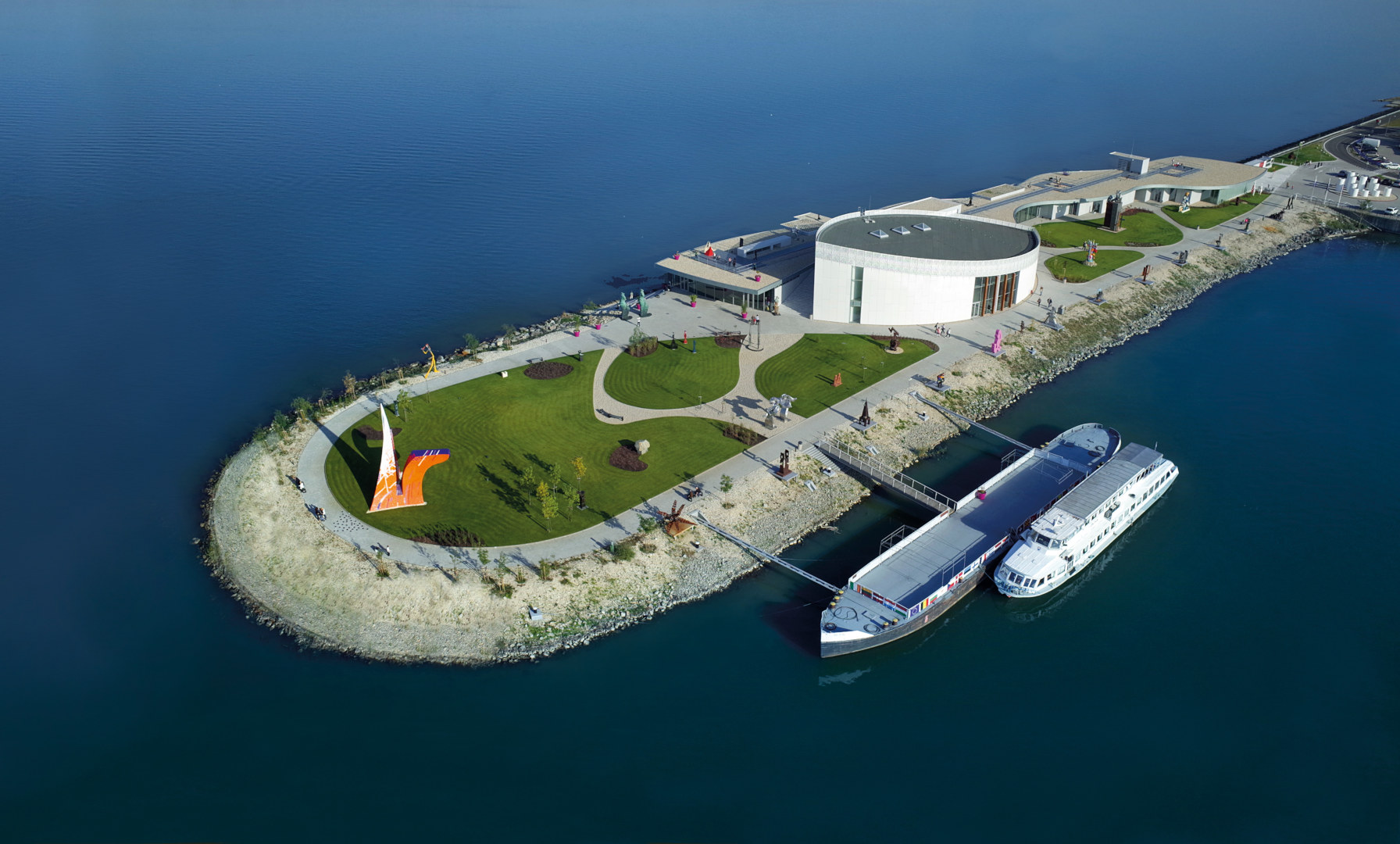 While the Sans og Samling exhibition is taking place at the CHPEA museum in Herning, CoBrA fans will also be able to enjoy works of Pedersen and Alfelt in new locations. Currently the museum is collaborating with the Danubiana Meulensteen Art Museum in Slovakia, where guest can enjoy a large exhibition of works from the CHPEA Museum’s collection. It is not the first time the museum has been creating international collaborations; in 2017, A Fabulous Encounter, an exhibition of bronze sculptures by Denmark’s late Prince Henrik, as well as the paintings by Pedersen, was exhibited in Spain, and later, the exhibition will be travelling to France, Helsinki and New York. “For the last three years, it’s very much been our ambition to create a greater focus on the fact that the CoBrA movement was an international movement with relevance beyond the borders of Denmark. It has taken some work to get that across, but we’ve succeeded,” says Korshøj.

70 years ago, the CoBrA artists got together in a new artistic movement with the agenda of creating more focus on play, creativity, and artistic freedom.

Following the Second World War, the artists in CoBrA wanted to return to the starting point for all art – the pure joy of sensual, artistic creation, something which, according to CoBrA, has been inherent in all humans through all times.

Even though the group only existed from 1948-1951, it became a great artistic influence.

It was Else Alfelt who introduced Carl-Henning Pedersen to painting.

The idea for the museum originated when, in 1966, Carl-Henning Pedersen offered to donate his entire collection to the Danish State.

In 1976, the museum opened its door to a collection of 6,000 works by Carl-Henning Pedersen and Else Alfelt.

In 2015, the museum was extended with an underground hallway leading to Angli, where Carl-Henning Pedersen’s monumental frieze, Imagination’s Play around the Wheel of Life, is located.

The Museum is situated in Birk Centerpark, in the eastern part of Herning. Birk offers a variety of cultural experiences including a sculpture park and The Geometrical Gardens.