Disgusting Food Museum: Disgusting to one, delicacy to another

W ho is to say what is revolting and what is not? Something that you consider sickening could be a delicacy to someone else. A museum in Malmö is dedicated to informing about and discussing food from around the world that is, generally, regarded as disgusting.

‘Surströmming’, a type of fermented herring, is part of traditional Swedish cuisine. These days, it is not that commonly eaten, but it is still known for its – shall we say rancid – smell. “Of the 94 cases of vomiting we’ve had here in the museum, surströmming has caused about half of them,” begins Andreas Ahrens, co-founder and director of the Disgusting Food Museum. The fact that the entry ticket comes in the form of a vomit bag, similar to those given out on airplanes, says it all.

With a great interest in food and in travelling, Ahrens always made sure to try some local specialties on his worldwide trips. And this is essentially how and where the idea of the museum was born. Since it opened in 2018, the Disgusting Food Museum has welcomed a steady stream of visitors who are invited to smell, taste and touch some unusual foods from around the world.

“There are two main messages behind the exhibit. Firstly, we want to show that all cultures are equally disgusting. We get used to certain food growing up, food that people from other parts of the world might find revolting, and vice versa. Secondly, we want to make people realise that the environmentally sustainable protein sources of the future might appear to be disgusting at first. Maybe more of us will have to get used to the thought of eating insects, algae or lab-grown meat,” Ahrens points out.

Necessity is the mother of invention

In its disgusting museum collection, visitors will find, for instance, ‘casu marzu’, a traditional Sardinian sheep’s milk cheese that contains live maggots. “The maggots can jump up to 15 centimetres, so you’ll have to cover your eyes while eating the cheese so they don’t bite into your retina,” Ahrens casually explains. Oh, and in addition, make sure to chew the maggots properly as they can otherwise survive in the intestines and cause some quite nasty illnesses.

Another must-see at the museum is ‘kiviak’, a type of traditional Greenlandic food. In short, it is roughly 500 small birds that have been put inside a seal carcass and left to ferment for about three to six months. “We do a lot of research, and there’s always a story and a reason behind these foods. Kiviak comes from the north-western corner of Greenland, where the only food available for the most part of the year is fish. For a short period each year, a lot of these small birds come to the area and, of course, the local population sees it as an opportunity to eat something apart from fish. Traditionally, this was simply a way of preserving the birds,” Ahrens explains.

This is a museum that attracts people who usually do not visit museums on a regular basis. “I think one of the reasons we’ve been so successful is that we invite our visitors to touch and smell the exhibits,” Ahrens reasons. In fact, what the Disgusting Food Museum does has proved so intriguing, the concept is just about to be exported. In the spring, another disgusting museum is due to open its doors in Berlin. Several pop-ups are also planned for the next two years. 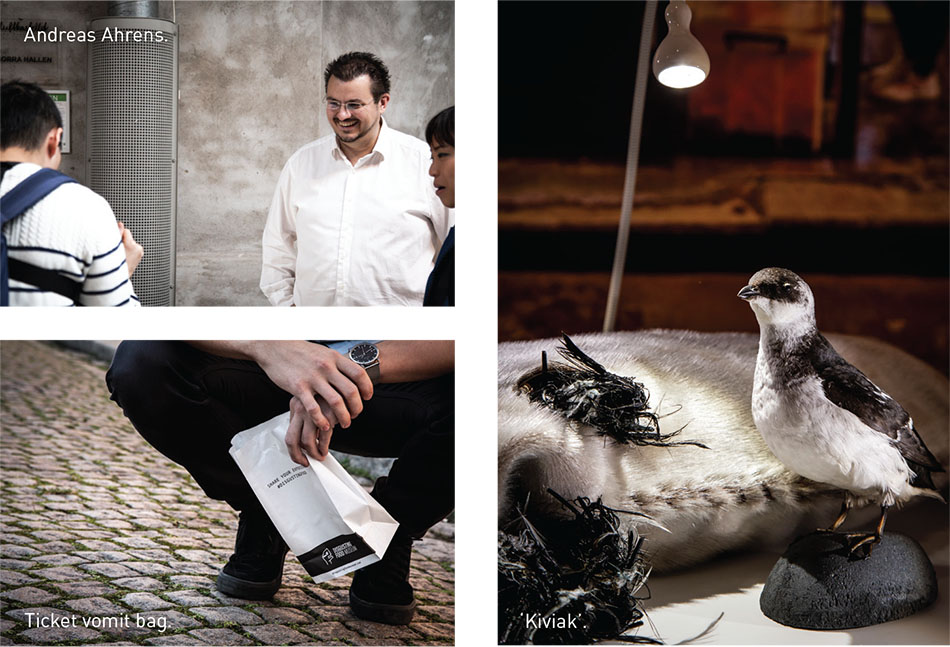 Not a freak show

Despite the fact that visitors to the museum are almost guaranteed to be surprised, captivated and maybe a little bit disgusted, Ahrens underlines that the museum is not a freak show. “What we want to do is to break down barriers and essentially inform, educate and entertain. There’s no universal right or wrong, only within the framework of one specific culture,” he explains.