Each summer, in the World Heritage Site town of Røros, Norway, historic events unfold among the remnants of the mining industry that once ran the place. Based on the 1718-1719 invasion by 10,000 Swedish soldiers commanded by General Carl Gustaf Armfeldt, the historical musical Elden is an annual reminder of Røros’ and Scandinavia’s dramatic past.

For centuries, there have been tensions and wars between the Scandinavian countries. One of the lesser-known battles took place in 1718-1719 at the end of The Great Northern War, when 10,000 Swedish soldiers, commanded by General Carl Gustaf Armfeldt on the orders of King Karl XII, headed towards Trondheim to take over Norway. Several hundred soldiers were sent to the town of Røros, south of Trondheim, to confiscate copper and other valuables.

When King Karl XII was shot by Fredsrikshald fortress, the Swedish soldiers had to withdraw to Sweden. The march across the mountains by the border was so rough that 3,000 soldiers did not make it across. This, along with the events that took place in Røros, lay the foundation for the historical musical Elden, written by Arnfinn Strømmevold and Bertil Reithaug.

Taking place at the turn of the month between July and August, among the slag heaps of Elden in Røros, the Elden musical theatre attracts 12,000 visitors annually. Visitors not only get to see Elden with its slag heaps up close; they can also visit the museums and the surrounding national park, as well as experience the town of Røros with its historical buildings and unique appearance and vibe. In the evenings at the amphitheatre, an award-winning team of producers, actors and actresses make sure the audience get an experience out of the ordinary. 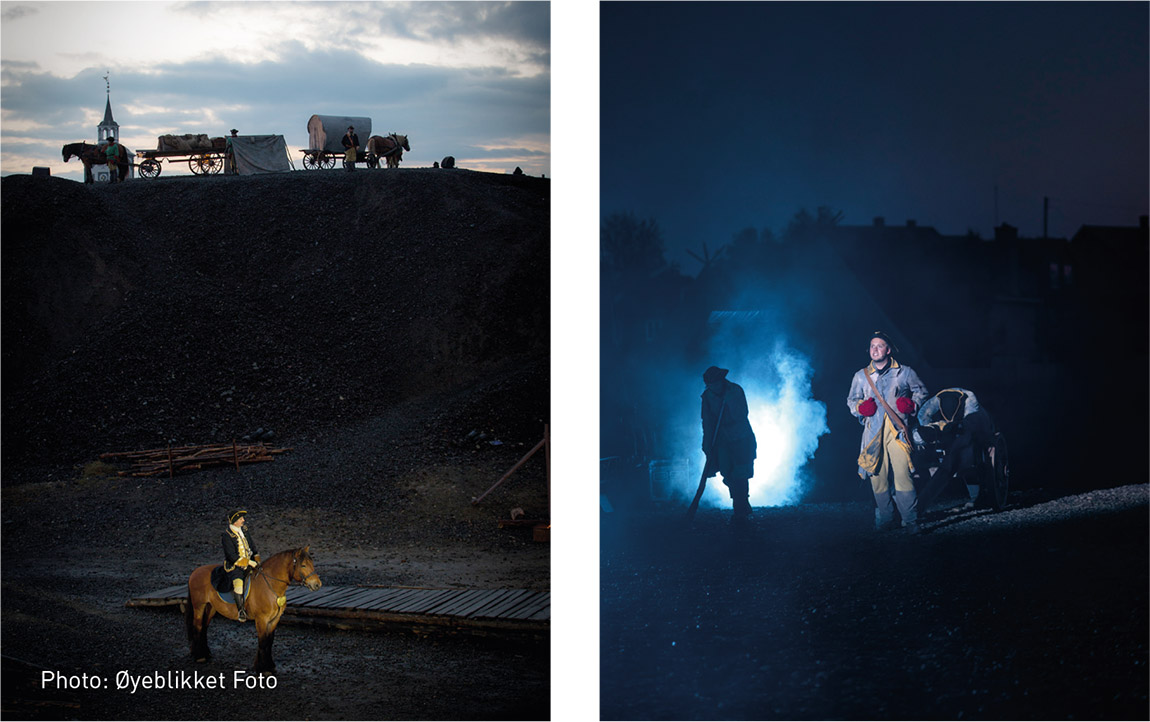 Spectacular setting for a dramatic performance

One of Norway’s biggest and most spectacular outdoor theatres, Elden is the perfect setting for dramatic performance. The large and dark slag heaps against the bright summer-night sky make an impressive backdrop to the performances and music. An award-winning team produces the play, with more than 320 actors, musicians, crew and volunteers doing their part to give the audience a night to remember.

Local food and drinks are sold before the performance as well as during the interval, and for those who want an extra special night, on-site Restaurant SLAGG serves a four-course meal based on local produce before the play. Performances and stories from the play are performed during the meal, which takes place in a ‘lávvu’ (a tent-like, temporary dwelling used by the Sami people).

And though the play is performed in Norwegian and Swedish, this shouldn’t discourage those visiting the country from making the trip: “We all go to experience operas performed in Italian or German without necessarily knowing the languages,” CEO Siri B. Gellein notes. “It’s all about experiencing the music. The same thing happens at Elden. Even if you don’t speak Norwegian or Swedish, you will get a spectacular musical experience.”

Foreign visitors also get a pamphlet, available in several languages, acting as a summary explaining what is happening on stage. And visually, the play itself is explanatory, even if the words aren’t recognisable to some.

Sample local food prior to the play

In 2022, Elden will be a certified Eco-Lighthouse event, ensuring compliance with one or more sets of governance and environmental criteria. Steps taken to preserve the environment, in addition to the locally sourced food, are making Elden plastic-free. Single-use cutlery is made from wood, while all packaging used is compostable and biodegradable. The size of Røros also makes it practically car-free. It is easy to get around by foot or bike.

The Elden musical is suitable for anyone above the age of six. This is due to the time of the performance (from 9.30pm to midnight), the dramatic nature of the story, and the visual and audio effects. As the play takes place outdoors, visitors are encouraged to dress in layers with plenty of wool, as even though the days can be warm, the nights tend to be cold. Elden also recommends bringing rain gear in case of showers.

Any local Covid-19 restrictions at the time will be adhered to. For more information and to book tickets, visit Elden at: Web: www.elden-roros.no Facebook: EldenRoros Instagram: @eldenroros