For more than 50 years, the iconic duo Gilbert & George have challenged all conventions with a disregard for what might be considered ‘good taste’. Now showing at Moderna Museet in Stockholm, Gilbert & George: The Great Exhibition is a manifesto of their life and work.

Gilbert & George met at Saint Martin’s School of Art in London, fell in love and have since then dedicated their life to their art. “They have been working together for over 50 years and have created their own style and way of being artists,” says Olle Eriksson, exhibition producer at Moderna Museet. “It’s not possible to draw a line between their life and their art.”

The art of the married couple is centred around their life in London, a mix of misery and luxury. Since the late 1960s, they have resided in Spitalfields, at the time a run-down area and now a diverse hub in the East End. Eriksson explains: “Gilbert & George have documented London and its inhabitants from the 1960s to today. You can see a fantastic change in the city by looking at their pictures. And instead of criticising change in society, they are embracing and celebrating it.”

From the start, Gilbert & George became a form of living sculptures to communicate their artistic vision, as they simply could not afford a studio. In the 1970s, they became known as The Singing Sculpture, with a performance of the song from 1932 by Flanagan and Allen called Underneath the Arches, about homelessness during the Depression.

Eventually they started creating pictures under the motto ‘Art for All’. With their unique printing technique developed in the 1980s, the art grew larger and bolder, often dealing with existential questions in works such as Death, Fear, Hope, Life (1984), Shitty, Naked, Human, World (1994) and Sex, Money, Race, Religion (2016).

The new exhibition at Moderna Museet is a manifestation of their life and work. The space is filled with pictures from floor to ceiling: surreal, thrilling and perhaps also frightening. Most pictures portray the artists themselves with themes such as sex, race and religion. “This is a form of letter from Gilbert & George to the audience in Stockholm,” says Eriksson. “The pictures appeal to a wide audience, give us new perspectives and change us.” 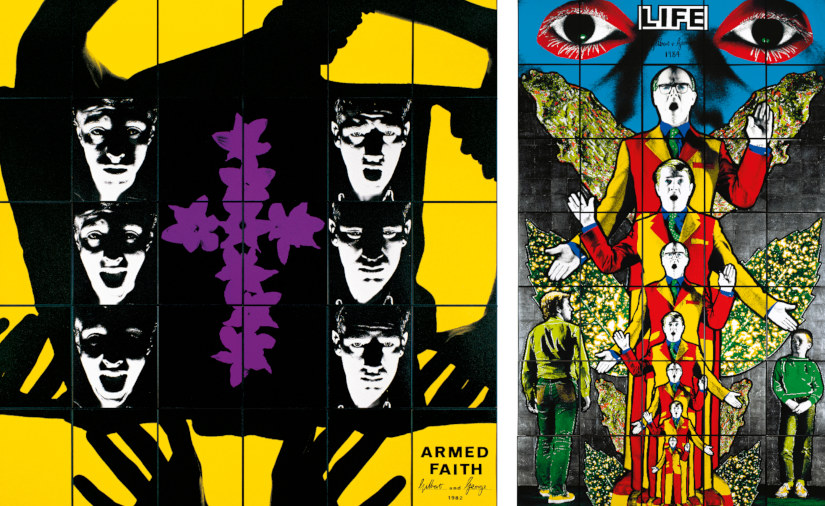 Promoting free speech, the artists continuously strive to reach a wider audience in London and elsewhere. And Gilbert & George are certainly accessible in contrast to some other celebrities in the art world. Impeccably well-dressed in near-matching suits, they still walk the neighbourhood in Spitalfields on a daily basis.

In a film introduction to the exhibition, Gilbert & George guide us through Spitalfields while sharing their past and present. “We still live much the same as we lived 40 years ago,” says George, and continues: “I think we do lead very orderly, quiet lives. I think in that way, we are able to be more clean-headed. We have more space for creating.”

Gilbert & George meet at Saint Martin’s School of Art and Design in London. George describes it as “love at first sight”. The two young sculptors soon begin seeing themselves as “living sculptures”.

Gilbert & George rent a room on 12 Fournier Street in the East End, then a run-down outskirt. Years later, they buy the building and make it their home, studio and a part of their art.

“We left our house. We opened the door and went into the world. And what did we see? Big piles of shit. Big piles. And we saw all this aggression. The world was in turmoil.” – Gilbert & George

AIDS is a new and terrifying disease. The tabloids run alarming headlines about “the gay plague”. Many friends of Gilbert & George are diagnosed with the terminal disease.

Gilbert & George achieve technical perfection with their unique printing process. Their images are composed from detailed sketches. The result appears only when each image is developed and assembled.

Negatives, fixatives and darkrooms are replaced with computers. Gilbert & George unsentimentally change technique, and the only thing they miss is the rubber gloves, which are no longer needed.

Gilbert & George: The Great Exhibition is showing at Moderna Museet in Stockholm until 12 May 2019. Curators of the exhibition are Hans Ulrich Obrist and Daniel Birnbaum.