Pushing a pram around Copenhagen at night, once again freezing her hands after forgetting her gloves, Tine Land suddenly had an idea: what if you could make gloves that stay on the handle of the pram all the time?

In September 2019, Land had her baby, Walther. As it got colder, Walther didn’t sleep much, and before embarking on frequent walks at night, Land struggled to always remember the dummy, the bottle – and gloves for herself. At the same time, she found it quite awkward when she had to take off her gloves, hold them, give Walther his dummy and, finally, put the gloves on again.

Drawing upon her years of experience within the clothing industry and her knowledge of quality textiles, Land designed the Østerbrohandske (‘the Østerbro glove’), named after her neighbourhood in Copenhagen.

“At first, I wasn’t sure if the idea was too weird,” Land admits. “But my husband loved the design, so he ordered a couple of boxes and convinced me that I should try selling them.”

A business was set up, going by the name of KongWalther (‘King Walther’), and soon enough, the orders started coming. A crucial platform for the brand is Instagram. Using her profile as a sort of diary, Land invites the followers to join “the universe of KongWalther”, as she puts it.

“My profile is quite personal,” Land says. “All photos and videos are shot by me, including a video of myself wearing the Østerbrohandske while it’s snowing. I think people are captivated by my storytelling, and that’s a feeling I recognise; if I feel drawn to someone, I’ll definitely want to support them.” 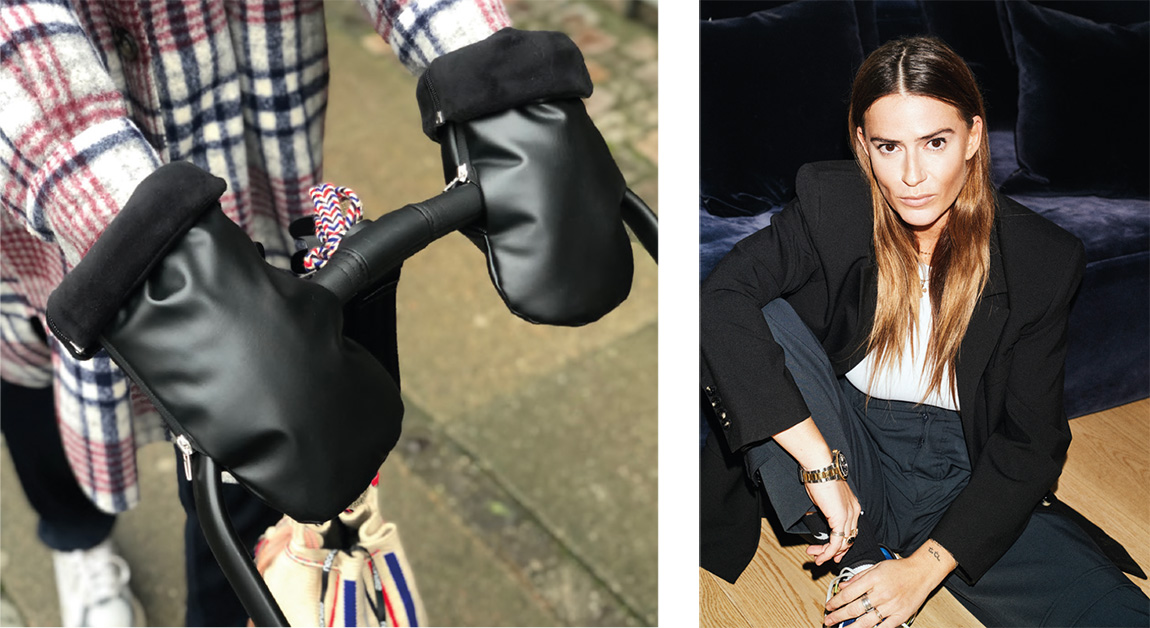 Right: Tine Land designed the Østerbrohandske after becoming a mother.

From the beginning, Land realised the importance of showing rather than telling. “When I phoned potential buyers, they didn’t understand what I was talking about,” she recalls.

That’s why she decided to meet possible customers in person to demonstrate the product. Occasionally, she would bring Walther on her arm, reinforcing the message of the housewife who started her own business.

What began as a hobby project quickly gained success as the orders kept coming. Last year, a significant number of orders were placed, and to start the production of gloves, Land and her husband had to raise the necessary funds.

After getting rejected by several banks, the couple made a radical decision. “We are Jutlanders, after all,” explains Land. “When the banks wouldn’t lend us the money, we agreed to sell our house and rent a flat instead.”

The name, Østerbrohandsken, might suggest otherwise, but Land hasn’t forgotten where she came from. “I make sure to tell people that I’m originally from Jutland,” she smiles. “In fact, I mostly ship to Aarhus, the city I grew up in.”

But KongWalther’s products are sold all over Denmark – so why name the glove after a Copenhagen neighbourhood? “Essentially, it was a way of taking the mickey out of the people living here,” Land explains. “It’s an inside joke in Copenhagen that all families with young children move to Østerbro. And it’s true; you do see a lot of prams here.”

With hindsight, Land is quite satisfied with the name. Originally intended for prams and buggies, the Østerbrohandske has proved itself useful in other contexts too. KongWalther has sold gloves for rollators, golf carts and cargo bikes. “I’m pleased I didn’t name it ‘the pram glove’,” she reflects. “It fits on pretty much anything with handles.”

All KongWalther products have been designed to make the everyday life of parents a little easier. For Land, it was important to create products that could remove at least one of the challenges that parents with young children face.

“If I have to create something, it has to be a product that is truly helpful to parents – not just another bodystocking,” Land declares. “Our society mass-produces everything. As a consumer, you can get a thousand different versions of the same item.”

Rather than participating in mass production, Land sought to create a sustainable product. “The Østerbrohandske is made from recycled polyester,” she reveals. “We use cola bottles from the oceans in our production. In this way, we can help reduce marine plastic pollution.”

Sustainability has become particularly significant to Land since becoming a mother. It’s no coincidence that KongWalther was named after her son. “Your perspective changes when you have children,” she says. “Suddenly, it’s even more important to you that the world is still spinning 20 years from now.”

Left: Tine Land is supported by her husband, Mathias.

glerups: comfort for your feet, wherever you travel

HILDEBRAND: In style on and off the court