Lofoten Krigsminnemuseum: Shining a light on the past and informing for the future

Fancy a peek into the private life of Adolf Hitler, where he nourished his artistic side? Or perhaps a glimpse at Eva Braun’s purse? This and many more curiosities from World War II can be found at the Lofoten World War Memorial Museum. The museum holds one of the world’s largest collections of unique artefacts that tell a story from the war far from the battlefield.

The Lofoten World War Museum is a museum that is out of the ordinary, where the focus has drifted from the military to the personal side of the war. Thus, the museum takes pride in reflecting the time span between 1940 and 1945 with all its drama and brutality alongside examples of personal sacrifices, altruism and courage. “It is a historical museum with curiosities that attract people from all over the world. It intends to encourage people to think for themselves,” William Hakvaag says. He is the enthusiast behin the museum, and it has become his mission in life to locate and exhibit artefacts that tell stories about people and the war. “A museum ought to shed light on the past, namely through photo material, pictures and text. Together, this constitutes a story, but the best thing it will do is to encourage visitors to think and make up their own conclusions,” Hakvaag says.

Being Norway’s largest exhibition of uniforms, artefacts and small objects from World War II, there are many curiosities displayed within the museum walls. Hakvaag himself has travelled near and far to get his hands on the unique pieces, and the current collection consists of porcelain of Reichskommissar for Norway, Josef Terboven; Christmas trees called Frontbaums, sent up north to cheer up Waffen-SS; Christmas tree decorations with Hitler’s head painted on them; as well as a large collection of uniforms.

One of the most notable artefacts includes the main flag taken from the German ship Blücher after it was sunk in the Oslofjord. On that note, the museum also holds the cap of Birger Eriksen, the officer who ordered firing on the ship and was thus instrumental in stopping the first wave of Germans invading Norway.

“Eriksen was from Lofoten, and it is therefore particularly special to have his cap,” Hakvaag says. 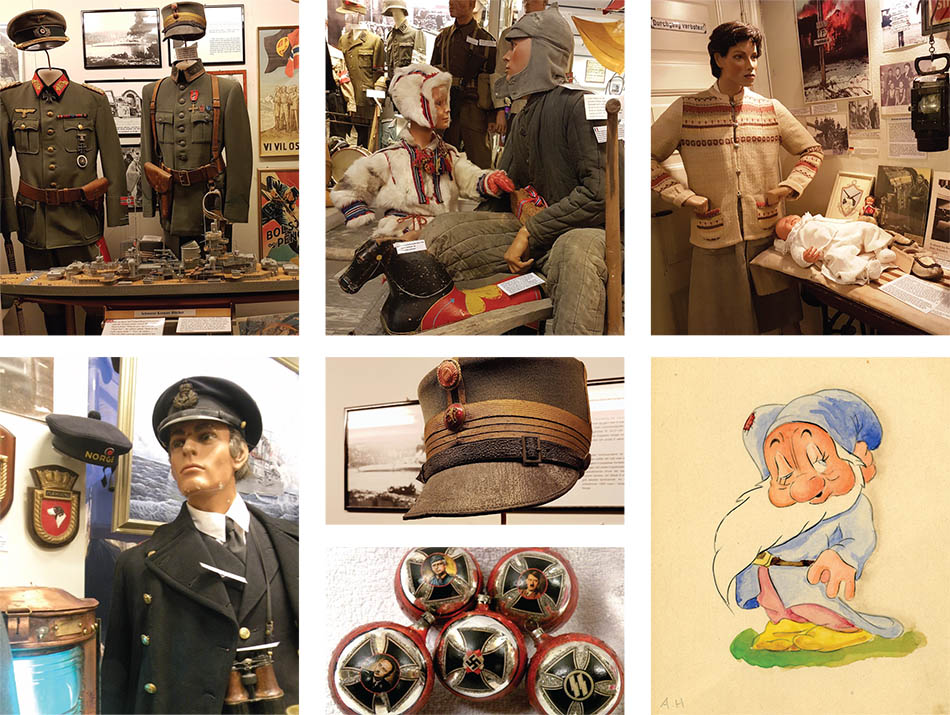 The museum exhibits a range of original artefacts from World War II, including clothes and equipment as well as five watercolour paintings painted by Adolf Hitler. The painting of the farm house had a double back a hidden compartment – where four other images painted by Hitler were hidden.

The Lofoten raid – the first victory against Germany

It is no coincidence that the museum is located in Lofoten in northern Norway. The place played an important role during the war at the centre of Operation Claymore, often referred to as the Lofoten raid. On 4 March 1941, the allied forces, with the United Kingdom in the lead, carried out the raid on the Lofoten islands. It was soon considered the first total victory against Germany during the war, and it was a massive morale boost for British and Norwegian troops. It did, however, lead to the enormous fortification of Svolvær in Lofoten, and not least it opened German eyes to the north.

As a direct consequence of the raid, the Gestapo established their regional headquarters in Svolvær, alongside a considerable increase in German soldiers in the area.

Hitler behind the scenes – an artist and vegetarian

Adolf Hitler is probably one of history’s most talked about men, and there is no lack of biographies. Most people are struck by his brutality, while others are also fascinated by the man behind the public appearance. It is a well-known fact that he was an eager artist, and it has been argued that the whole war might have been avoided if he had been admitted into the Vienna Academy of Art. With this in mind, Hakvaag bought a painting by Hitler for 200 Euros. What neither he nor the vendor knew was that behind the paintings there were five drawings of dwarfs from Snow White , all signed by Hitler. “He was an artist by nature, which one could also see in his behaviour as a leader. He did not follow the rules of the game and did things that no rational leader would do: for example, sending his troops to Russia without winter clothes,” Hakvaag says. While obviously portraying Hitler as the leader of the war, the museum is also trying to show the person behind the scenes, who was a vegetarian and a non-smoker. “He was a hard-line psychopath, who may not have struck people as the dangerous person he really was at first. This is all part of our desire to make people think for themselves and gain a new insight into history.”