A rtist Marte Johnslien always studies the materials she uses in her sculptural work, and for the exhibition White to Earth, her final PhD project in Artistic Research at Oslo National Academy of the Arts, she’s immersing herself in the pigment titanium dioxide’s unknown history.

Titanium dioxide (TiO2) is one of the lesser-known, though still substantial Norwegian exports. A man-made material discovered around 1900 through experiments with minerals containing titanium, TiO2 has become as important and essential as fish or oil. Norway was one of the leading nations in developing the material, through professors Dr. Peder Farup and Dr. Gustav Jensen, who collaborated on producing coloured pigments from ilmenite, and who obtained the world’s first patent for the production process of titanium white pigment. Johnslien’s project questions why we are unaware of this material. 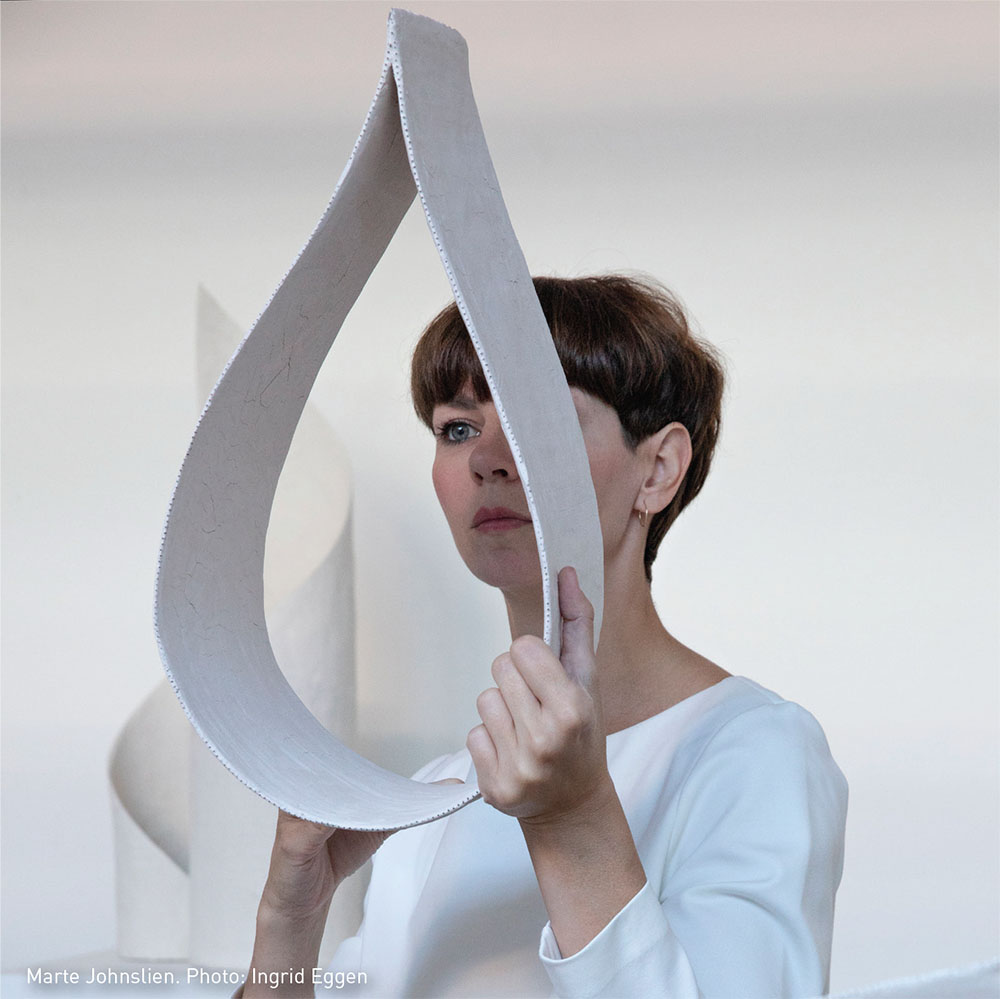 The planet’s largest occurrence of ilmenite on land can be found in Tellnes in the Sokndal area of south-west Norway, and the ore is estimated to contain 12 per cent of all ilmenite in the world. The annual production of ilmenite from this ore covers six to seven per cent of the world market, making Norway one of the biggest suppliers of the white pigment in the world.

Johnslien has followed the material’s journey from the extraction at Sokndal’s Titania AS mine, through to the finished product. The mine itself covers an area of 1.35 square kilometres and is approximately 130 metres deep. Every year, 13 million tonnes of ore are excavated, broken loose by explosions in the ground and crunched over and over again until they reach a particle size of less than 0.5 millimetres, before the ilmenite is extracted. 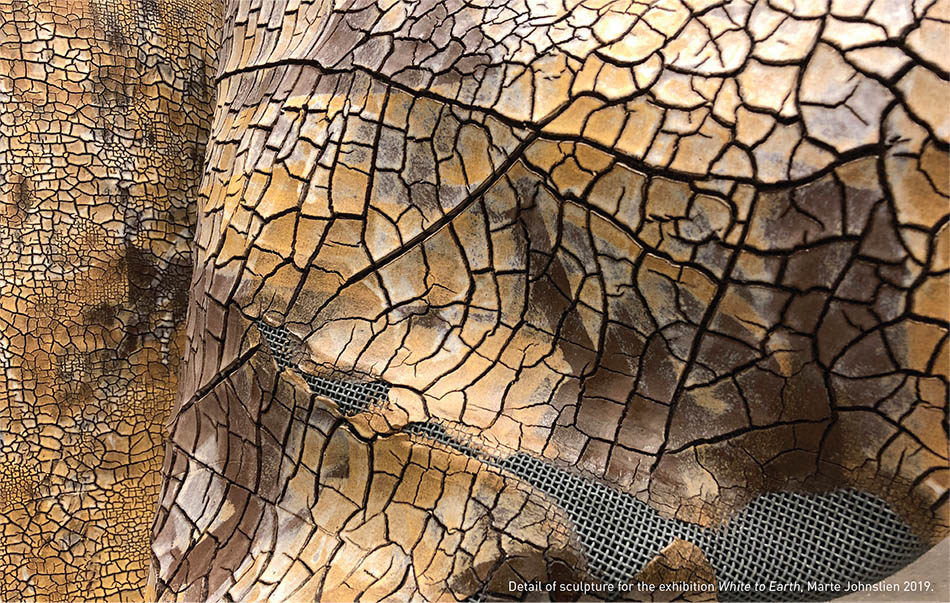 A growing lake of sand

The tailings from the extraction process is very fine sand that cannot be used for anything. It was previously dumped into the ocean but has since been moved to a land-based depot after a lot of attention was drawn to the issue in the 1980s by environmental organisations. The current depot has reached an almost unfathomable size. A whole valley is filled with the leftover sand, giving it the appearance of a sandy lake. Trees are being swallowed and the lake keeps growing, as yet more sand is pumped in daily. The depot grows by two million tonnes every year and is estimated to reach its limit in 2024, when another valley will take its place as the dumping ground for the leftover material.

Not only is this damaging to the valley and the surrounding areas smothered by all the shifting sand, but the sheer weight and pressure of sand upon sand can make molecules split and release toxic minerals like nickel. The minerals may enter the water flow and eventually be washed into the sea.

“Thankfully, regulations are much stricter than they were,” Johnslien explains. “They’re continuously observing how much nickel and other minerals are released. It’s a lot more controlled than even a few decades ago, but, undoubtedly, the mining still leads to non-reversible damage to the nature.”

From Titania AS in Sokndal, the ilmenite is transported to the sister company Kronos Titan AS in Fredrikstad, where it goes through the chemical processes turning it into TiO2. “In its natural state, the ilmenite is a blackish brown,” Johnslien says – the polar opposite of the titanium dioxide bright white. 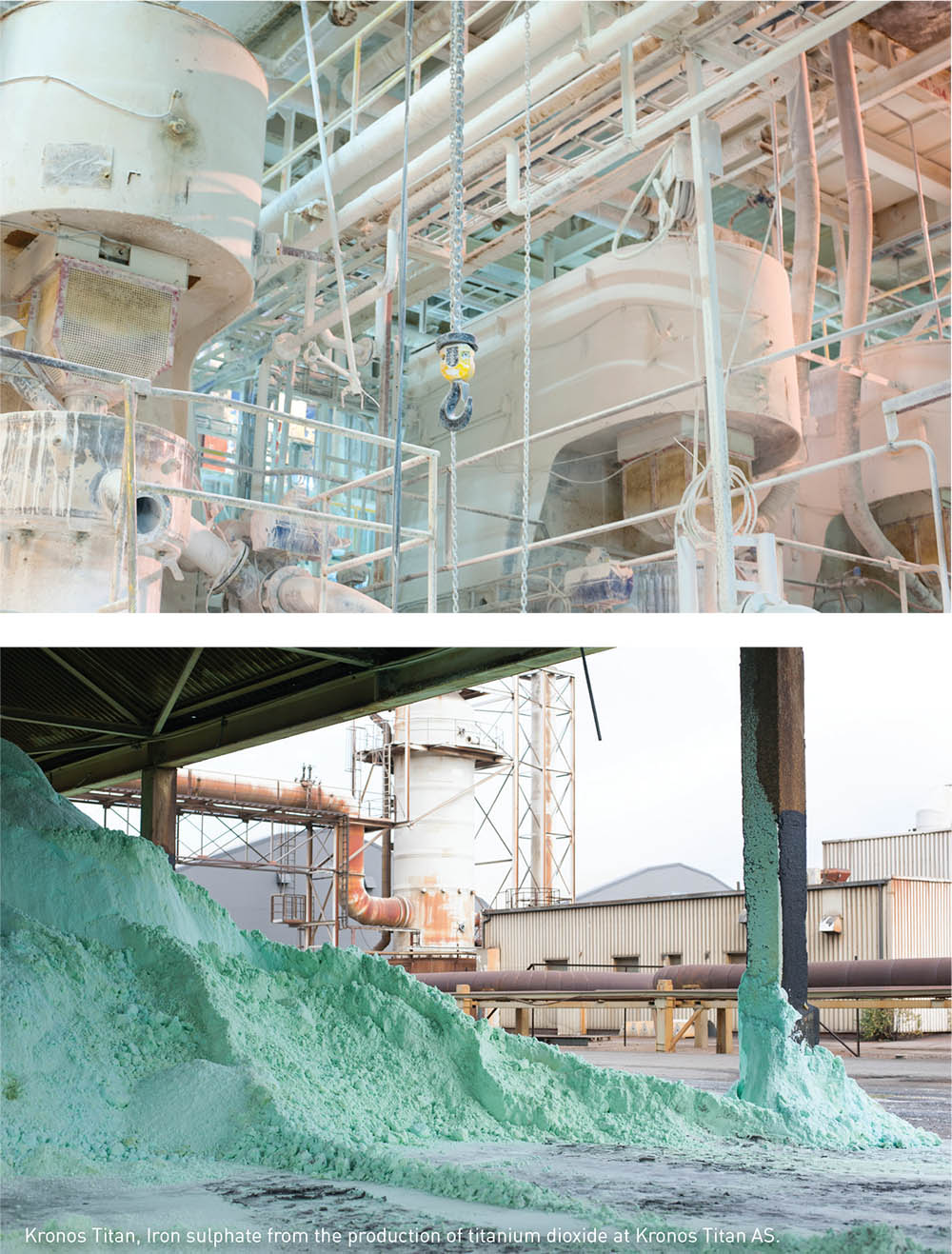 “I think of titanium dioxide as capitalism’s closest ally,” Johnslien says. “Because of its high applicability, it immediately became very popular. Due to its opaque and clean colour, its chemical stability, its adhesive qualities and also the fact that it was not hazardous to health so it was believed to be safe for use in food, it has ended up affecting our reality more than I think we are able to envisage,” she says.

“Imagine what the world would have looked like without TiO2,” she enthuses. “Food would have looked less inviting, medicinal products would appear less neutral and trustworthy – even the paper of this magazine would be less white! The new, the bright and the clean, white products and materials we surround ourselves with are the objects of desire in a commercial capitalist system, and without the bright white pigment, the world would have been less desirable.” 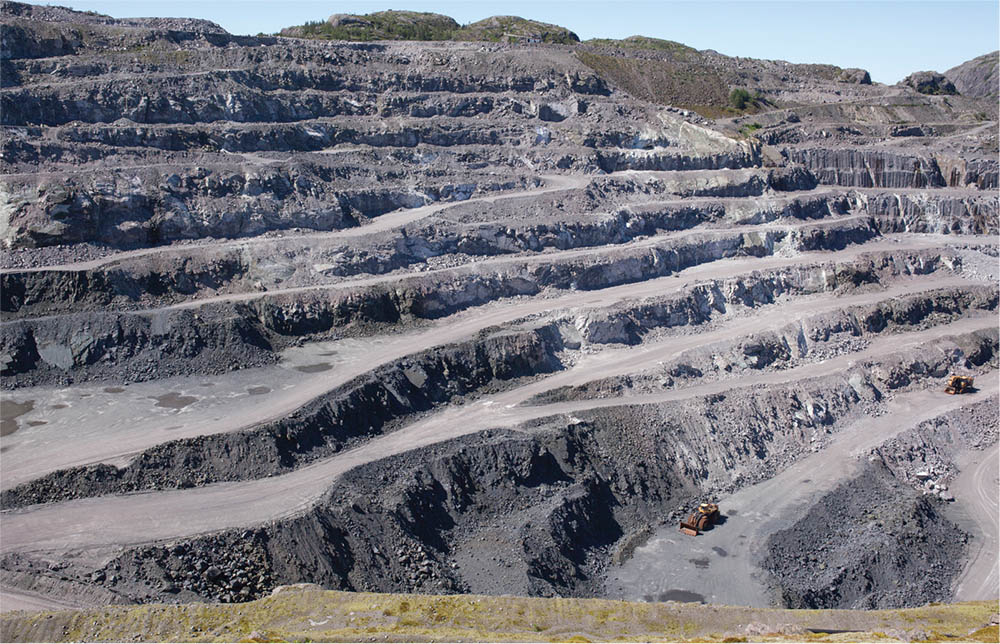 Johnslien continues: “The fact that titanium dioxide is a material we’re constantly surrounded by without being aware of, and that it has affected our modern world to such a large degree, are the driving forces for my artistic project.” She has investigated the material through photographing the places it gets produced, through writing a text about its history and making ceramic sculptures with the material.

“The results will be presented as a book, and as two series of sculptures at gallery ROM in Oslo. I am inspired by what the British philosopher Timothy Morton calls hyper-objects — objects so large and omnipotent that we become blind to them. If my work can contribute to making people more aware of their visual surroundings, and how materials we surround ourselves with connect to nature and the ecological system, I think I have succeeded.” 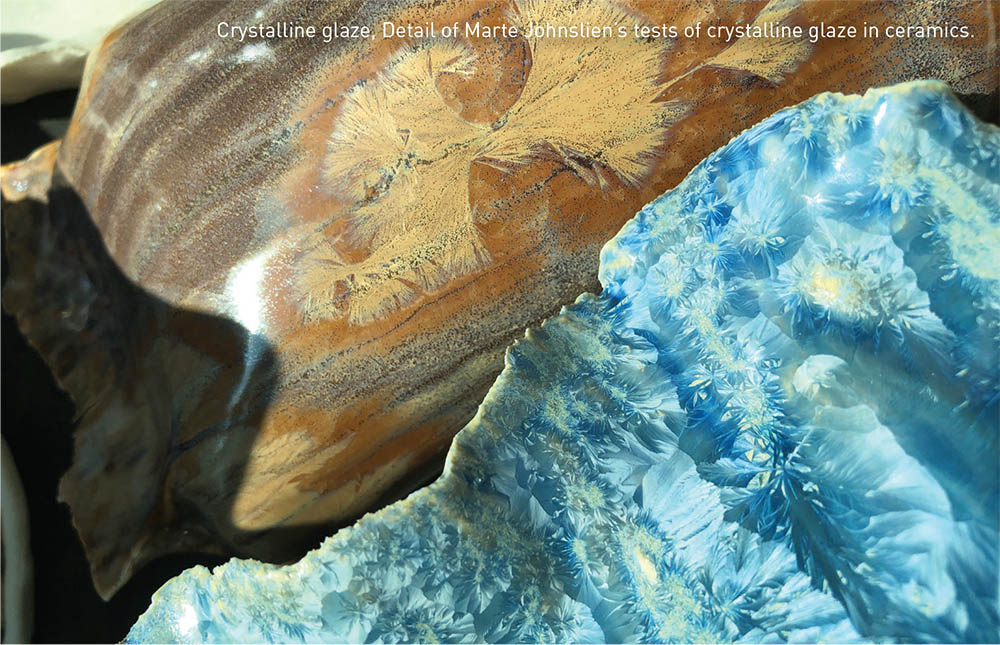 Johnslien is looking at how titanium dioxide acts when used in ceramic glazes, and how, perhaps, it can tell us more of the material nature of the pigment. In ceramics glazes, TiO2 isn’t used for its white colour, but for its mechanical properties. It binds well to the clay, allowing it to easily coat the sculpture. It can also be used for crystalline effects, where it, by reacting to other chemicals, may produce beautiful crystal shapes on the surface of the ceramic objects.

The pure, white properties that are so desired by the world disappear during these processes. Johnslien’s project exposes how our idea that white is pure, clean and immaterial is a constructed truth – a white lie. The whiteness comes from the Norwegian mountains, brought to us through chemical and environmentally damaging processes. She attempts to make us see the whiteness in a new way — and to bring it back to its origins — back to the earth.

The exhibition White to Earth opens at ROM, Oslo, 21 January 2020, and lasts until 23 February. 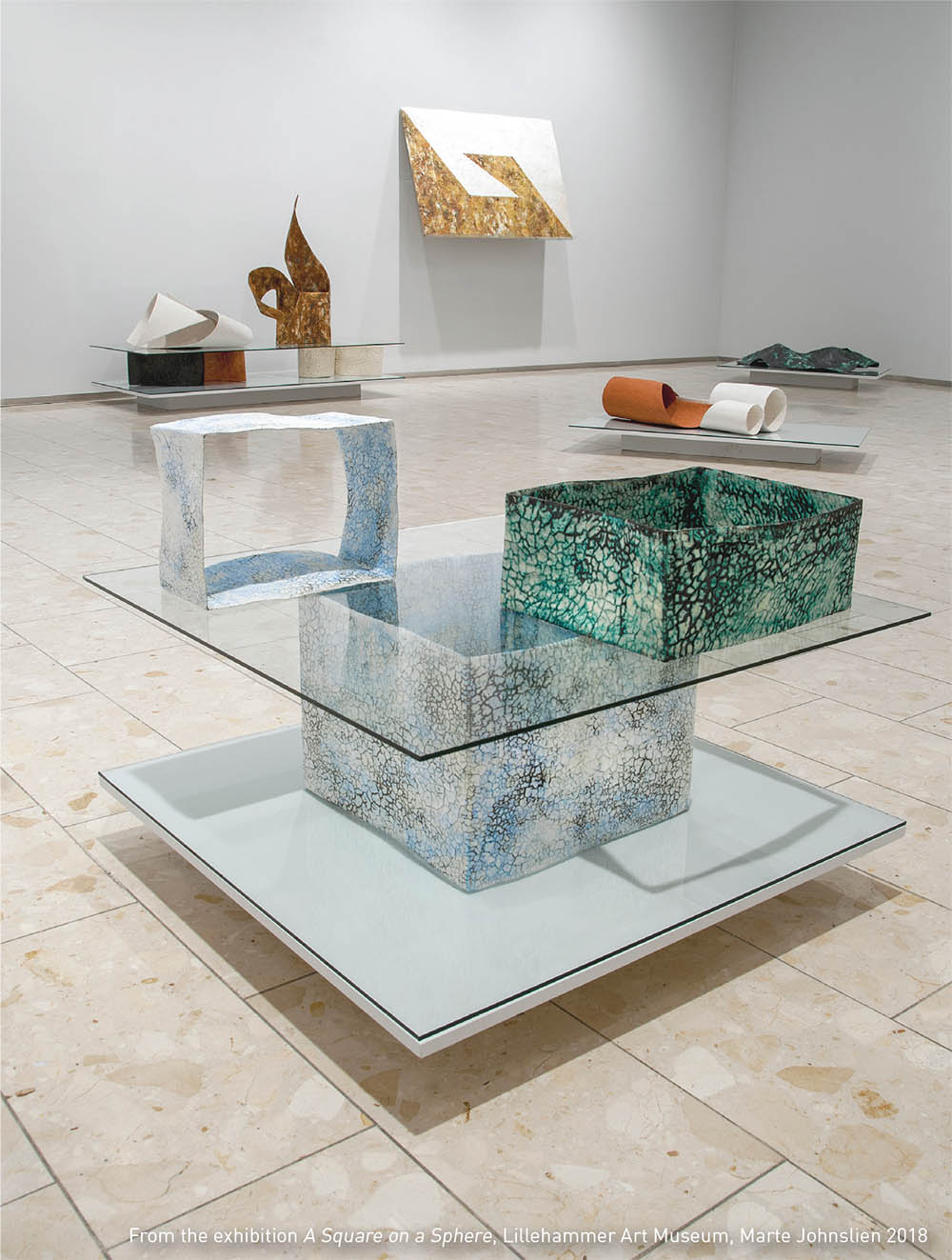