Raseborg – close, yet so different

Bursting with interesting history in scenic surroundings, the old ironworks municipality of Raseborg is also a modern hub for art, design and world-class gastronomy. Despite its close proximity to Helsinki, upon arriving, you step into a different world.

Raseborg is one of the most stunning parts of Finland, and located just an hour from Helsinki, it is perfect for a day trip. The municipality, named after a medieval castle, has plenty to see. The rich history lives on in mills and smithies, castles, villages, museums, monuments and a vibrant cultural landscape. For instance, you can discover the popular artisan villages of Fiskars and Billnäs or find peace and quiet at the stately Mustio Manor.

“Raseborg certainly has a rich heritage with the old ironworks,” says Ville Vuorelma, tourism manager at Visit Raseborg. “But it has managed to transform from something historic into a popular meeting place. Nowadays, the small towns and villages have become modern hubs for art, design and gastronomy. Still, Raseborg is surrounded by beautiful nature, including lakes and the sea, for an idyllic and peaceful stay away from the city.”

Mustio Manor is one of the most precious manor houses in Finland, with a history of more than 200 years. Built between 1783 and 1792 by Magnus Linder II, the meticulously restored manor house was the largest non-ecclesiastic wooden building in the country. With its unique parkland and White Guide Nordic-listed fine-dining restaurant Slottskrogen, this is a must-see.

“This is a historic place with the beautiful wooden manor and surrounding small buildings,” says Christine Linder, CEO of Mustio Manor. “All our rooms are different, showing the historic connection, and yet with individual charm. Quality is in focus in everything we do, and we have some of the best chefs in the country, who create modern Scandinavian gastronomy based on local and seasonal produce.”

The wooden building is embedded in one of the biggest private historical parks of Finland. Originally, it was designed as a Baroque park, but in the late 19th century, Friedolf Linder transformed it into an English garden. Set next to the historical Svartå river, it is a retreat for the soul with its winding paths, romantic bridges, statues, and the unique water-lily path over the water.

Today, Mustio Manor main building functions as a museum, and you can book a guided tour to see all the rooms. Mustio Manor offers many nice events, especially in summer, with the outdoor stage hosting concerts and theatre performances. 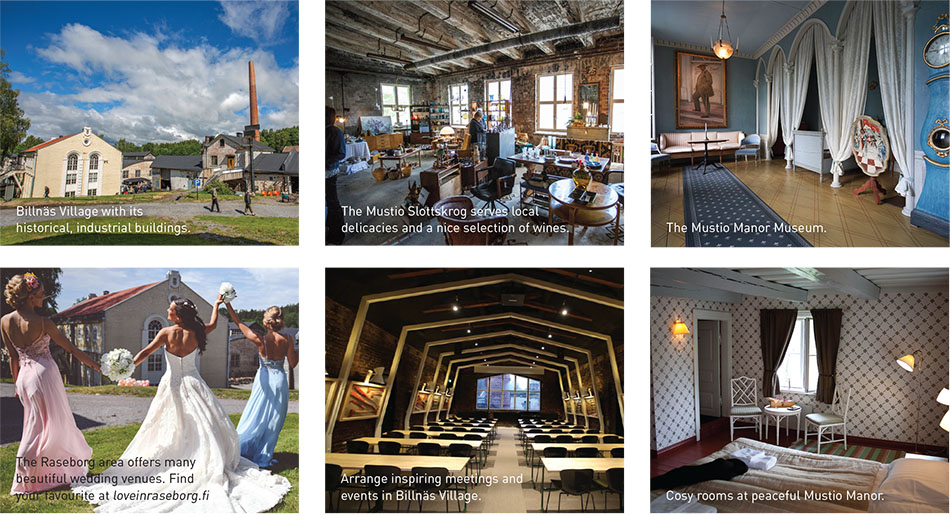 Also located along the Svartå river is Billnäs, where Carl Billsten founded the ironworks in 1641. Being the second and indeed a prosperous ironworks in Raseborg, Billnäs has had a central role in the establishment of the Finnish industry for almost 400 years. While the traditional industry has taken a step back and given room for modern trade, the old craftsmanship still thrives with many new entrepreneurs.

“Billnäs is a beautiful destination with the ironworks, the cultural landscape and the archipelago,” says Olli Muurainen, owner of Billnäs ironworks. “It has survived the changes of time, and we have maintained the old industrial buildings. Here, you can clearly see how nature is connected with history, which is encouraging.”

Billnäs has an active village association that organises events throughout the year, and the village is popular for wedding and family parties as well as conferences and meetings. “We have a lot of teams coming here for one or two weeks when working on special projects,” says Muurainen. “They find it inspirational to be in this environment.”

Billnäs – dates for your diary: Early July, Antiques Fair in Billnäs This annual fair is immensely popular, with around 10,000 visitors. Every year in July, the Billnäs Antique Days attract thousands of visitors from all over Finland to the charming ironworks milieu. Christmas in the Village During the festive season, it is worth paying a visit to the Christmas in Billnäs Village event, when a programme and bazaars are organised around the village. Mustio Manor – dates for your diary: 7 March Culinary Olympics Stuttgart dinner at Slottskrogen In the middle of February, Finland’s culinary team is competing for the victory in Culinary Olympics Stuttgart. Samuel Mikander and Kari Julin, who are on the culinary team, will prepare the competition dinner at Slottskrogen on 7 March, starting at 6pm. 25 April Delicious Arias II @ Mustion Linna The performances of the evening alternate with the flavours of the kitchen. The menu is specifically designed for this evening and to match the music. Performing artists: Helena Juntunen and Juha Uusitalo Piano: Pami Karvonen 21 July Premiere for Cray Fish parties at Mustio Manor Cray Fish parties are celebrated at the end of the summer. On 21 July, the celebrations start at Mustio Manor. Come along, sing, drink, and eat lots of cray fish with good friends! Web: www.visitraseborg.com Facebook: VisitRaseborg Instagram: @visitraseborg

Levi: In the Finnish moutains, a whirlwind of colours and activities awaits

Hawkhill: Escape into the Finnish wilderness