Restaurant Applaus: A fusion of food and fun

Since its opening in 2016, the social dining restaurant, Applaus, has continued to tempt the taste buds of the citizens of Aalborg. Situated in the northernmost part of Denmark, Aalborg is known for its reticence, but Applaus might have helped to change that image.

The concept of Applaus is simple: the kitchen mixes different cuisines from all over the world in endless combinations. A key term here is social dining, meaning that some dishes are served individually, while others are served as sharing platters.

“We try to bring a homely ‘get-together’ vibe,” says owner and chef Mads Hyllested. “Since the beginning, creating a laid-back atmosphere in which everyone can feel welcome has been our priority.”

From Copenhagen to Aalborg

Opening a restaurant in Aalborg after having worked at some of the finest restaurants in Copenhagen turned out to be tricky for Hyllested. “At first, I priced my wines at Copenhagen prices, which gave us a very limited sale of wine,” he recalls, wryly.

However, he and Aalborg quickly managed to become attuned to each other. Now, a continuous flow of customers dine at the restaurant. According to Hyllested, this has to do with the way he chose to set his pricing to suit the people in the city. Originally, the ten-course menu cost 395 DKK. Today, the restaurant serves 12 courses for 450 DKK.

The number of courses increases the range of fusion dishes and makes the customers feel they’re getting value for money. “Jutlanders really love to get a bargain,” Hyllested says. “As long as you get plenty for your money, it’s okay if one or two courses are not to your taste.”

Due to the contrasts between the two cities, the concept of social dining is run slightly differently in Aalborg. “In North Jutland, we have to move a little more slowly than in Copenhagen, where people are generally more receptive,” says Hyllested. “You can’t introduce too many new things at once; you have to take it one step at a time. Fortunately, we’ve found the right rhythm for doing this.”

One alteration is the serving of courses. Many of the social dining dishes are served as individual elements on a shared plate, meaning that you can move them on to your own plate – something that might be preferable when dining with a business partner.

Making the move from Copenhagen to Aalborg also became a personal accomplishment for Hyllested. “As I made my way to the top, I found that if I worked hard, I could just about hang in there. But I realised it wouldn’t make me happy in the long run,” he explains. “After I stepped down a level or two, I discovered my forte in this sector and I thought, ‘perhaps I have found my niche’.”

Applaus was the first eaterie in Aalborg to introduce the concept of a ten-course menu. Since then, the restaurant has managed to influence the dining habits of its guests, encouraging them to try some different ingredients. For example, duck hearts and liver have been successfully added to the menu.

As the 12-course menu is put together by the kitchen, it’s a ‘blind serving’, as Hyllested calls it. “Our customers put their evening in our hands, and it’s our job to fulfil their expectations as much as possible. This allows us to steer our guests in various directions,” he adds. “There are guests who we have got to know better; we now know that we can push their limits a bit more.”

Taking a Copenhagen concept and moving it to Aalborg takes some nerve, and Hyllested admits that he expected to meet resistance to the idea of a blind serving. “I thought it would cause some dissatisfaction, but it didn’t,” he recalls. “People were really keen on this model.”

While staying true to their original concept, Applaus has continued to grow. “Several people – including some from Copenhagen who were present at our opening and then returned three or four years later – have told us that they noticed a remarkable improvement in our skill level,” Hyllested says.

As for the future, Hyllested has a couple of ideas on the drawing board. Whether it will be more restaurants in Aalborg or possibly expanding the concept and starting up restaurants in other cities, time will tell. For now, the top priority is to maintain the status of Applaus.

“As long as I have guests on my chairs, as long as they provide positive feedback – then the restaurant is a success,” Hyllested concludes. 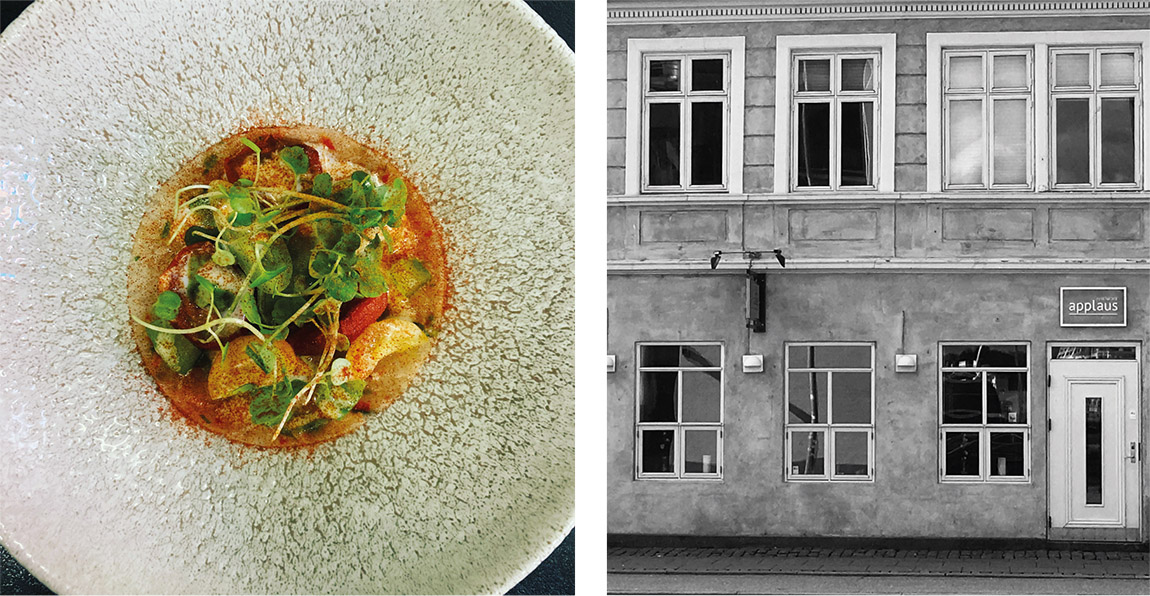