Nowadays it is believed that the Coca Cola adverts, showing a mass of red lorries adorned with lights and Father Christmas kicking back with a bottle of fizz, herald the beginning of Christmas. With the late autumn season and its absent snow and dreary, grey and dull skies, it is no wonder such a ‘tradition’ has caught on. Yet to the rescue comes the Scandinavian Christmas market guaranteed to instil a sense of warmth and peace in the hearts of even the most cynical of visitors.

December has always been a time for compensating for the lack of natural light by lighting fires, candles and turning on fairy lights to add some warmth and festivity to the house – especially in Scandinavia, where the northern darkness is particularly deep, heavy and persistent. Fortunately, Christmas markets help by adding cosiness and sparkle, making our fantasies of a season with white rooftops, jewelled trees and snowflakes come true. They also make the perfect excuse, if you ever needed one, to gorge on delicious food and sweets.

Attracting tourists as well as locals, . travel agencies even give out offers to include trips to Christmas markets. With this growing popularity comes an expectation for a truly authentic Christmas experience. As can be expected for a thriving tourist spot, traditional craftsmanship is sure to be on display, particularly wooden crafts that play with light by incorporating different kinds of wood. The atmosphere is enhanced by the dark Scandinavian winter sky, leaving traders to illuminate their goods for all to see. Rest assured, a heartfelt gift can be found with a local touch to bring back home.

As far as locations go, a town square is the ideal choice. The local people naturally congregate to this spot and visitors will find the central location easily, although with the amount of delicious market food they could just follow their noses. Nevertheless, it makes it easy for visitors, who may be unfamiliar with the town, to get a taste for the best foods and crafts on offer, without having to venture to the outskirts. 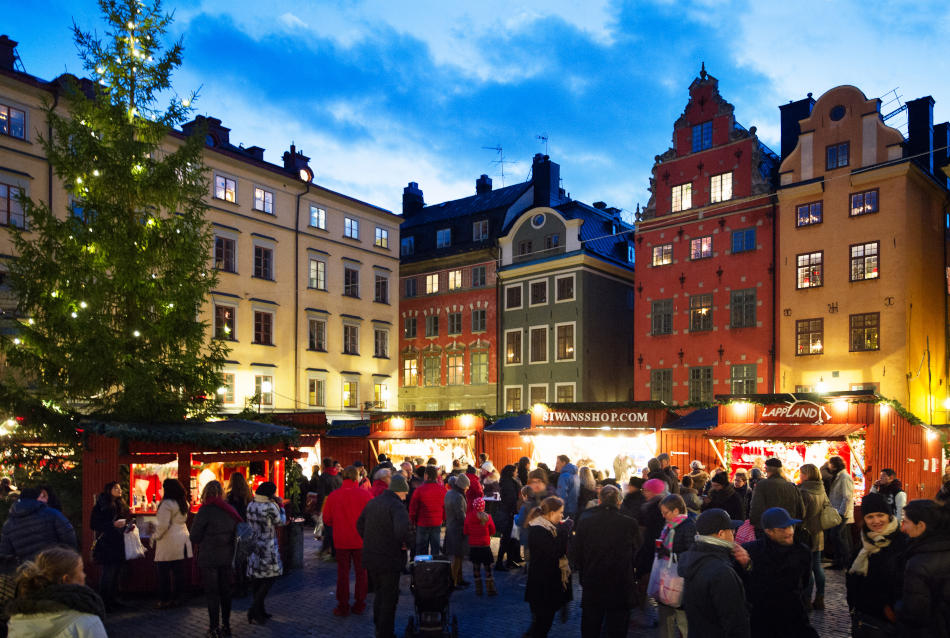 Think of a Christmas market as a winter edition of a farmers’ market,  welcoming events for locals to sell their produce and tell the stories behind them. It has the same ambiance of familiarity and the historical wisdom and passion of the locals shine through. Yet one important, and much anticipated, difference in most Scandinavian countries is that it is custom to serve mulled wine with spices such as cinnamon, star anise, rum-soaked raisins and almond flakes. There are several different versions of this mulled Christmas wine, called gløgg in Danish and Norwegian, glögg in Swedish and glōgi in Finnish, but its unmistakable scent is a sure sign that the market you are looking for is not far off.

Christmas traditions differ somewhat throughout Scandinavia but are centred around food and crafts wherever you go. Until recently, there has not been much of a Christmas market tradition in Scandinavia but, with a little help from their German and English neighbours, the Nordic countries have discovered the joys of it – not to mention their aptitude for hosting them. At first, these markets were not about trading goods but revolved around charities and fundraising, typically for the benefit of poor children so that they too could enjoy the festive season.

Though mulled wine dominates as the festive drink of choice these days, a more punch-like hot drink was traditionally served around a century ago. It contained golden, spiced spirits but was normally diluted to meet the alcoholic level acceptable for a Christmas market.

“The hot drinks and foods were mainly served to keep people warm during the winter, which was normally far colder back then than what we experience today,” explains Lars Sonne Hansen, warden at Suhrs Food Academy, an old housekeeping school now functioning as a Danish folk high school with highly regarded food courses. An old cookbook written by the founder, Ingeborg Suhr, dated 1909, includes among other things an old recipe for hot Christmas punch. 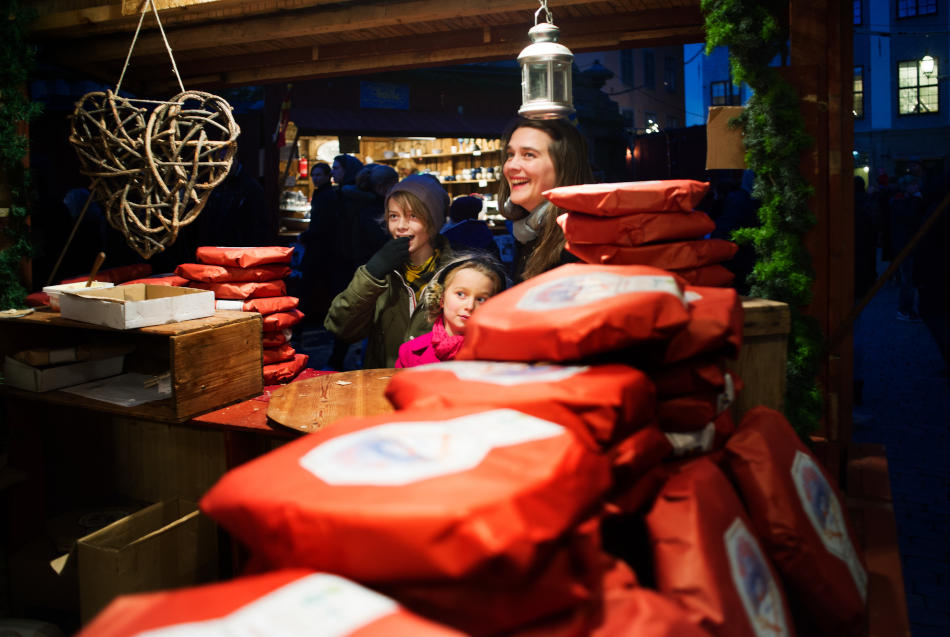 For an authentic Christmas treat, aebleskiver, which directly translates as apple slices, are a winner. These round balls of soft dough with a crispy crust were served at Danish Christmas markets from the very beginning. “Aebleskiver were especially popular as they were easy to prepare on a gas burner – normally without the apple slice though,” Sonne Hansen elaborates. While the name of the treat might sound somewhat peculiar, an aebleskive is actually more about what surrounds it than the slice itself. Special pans are made of cast iron to secure a perfect round form, and the treats are normally served with powdered sugar and jam.

Another important part of a successful Scandinavian Christmas market is the wide range of handmade ornaments reminiscent of the past, such as cornets made of glittered paper, which can be hung in the Christmas tree with small gingerbread biscuits, glass angels and bells reflecting the light from the small candles attached to the tree. These treasured and old Christmas decorations are a fun way to learn more about the origins of the Scandinavian traditions. For example, pepper was originally an expensive spice, and therefore the before mentioned Swedish gingerbread biscuits, which used the spice, were seen as a real treat only meant for special occasions such as Christmas. 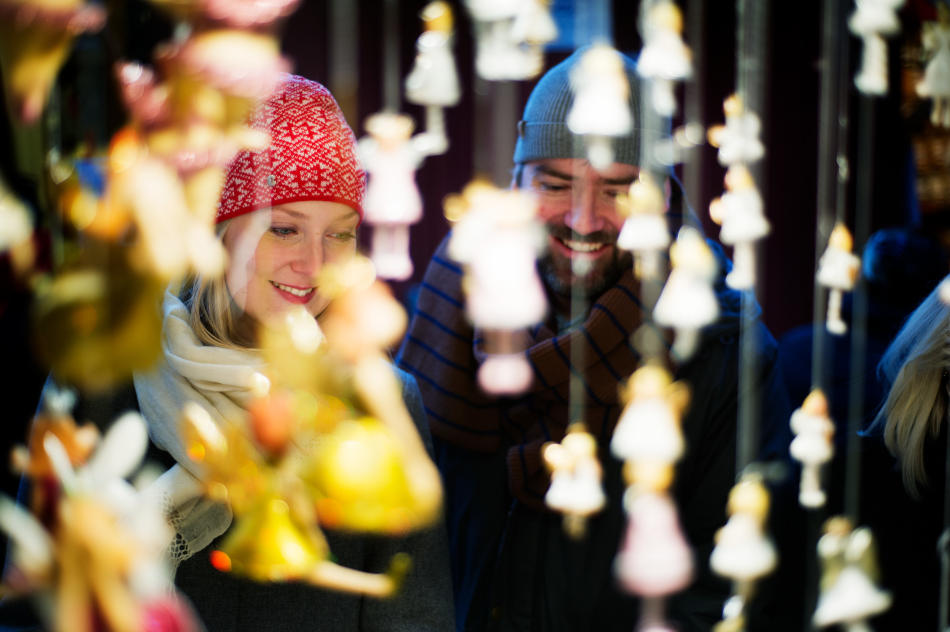 Starring in your own fairy tale

Some of the oldest royal blood runs through Scandinavian veins. Many Scandinavians view the royal families as important assets and, as such, their castles are also cherished. Several of the buildings have such a historical value that Scandinavian law protects them. The owners are not allowed to make large changes; only historically accurate and accepted restorations can be made. But despite this, the castle owners are allowed to invite the public to events such as Christmas markets, making for a thoroughly enjoyable time and allowing visitors to feel as though they are in a winter fairy tale. This experience is hard to come by in other parts of the world, explaining to some extent why it makes such a popular tourist attraction.

People come to Scandinavian Christmas markets to be part of the enviable festive experiences held in the north of Europe. Everybody is welcomed with warmth, despite the cold weather, sweets and treats, and an enticing, festive smell of cloves, cinnamon and cardamom.