The future looks bright for Stockholm Brewing Co. Expanding with new facilities and brew kits in Frihamnen, this independent brewery now has greater capacity to brew its popular organic beers. Last year, FARM Restaurant & Bar also opened as an extension of the brewery with a farm-to-table concept.

Stockholm Brewing’s co-founder Niklas Jakobson has a background in wine, working as a sommelier and running a wine import company specialising in natural wines. But he has always had a passion for beer as well and has been brewing at home for many years. In 2012, Jakobson started selling his own beer just as the craft beer trend was taking off. At that time, there were only around 30 breweries in Sweden, and according to the Swedish Brewers Association, this figure has grown to almost 350 breweries nationwide.

The secret to Stockholm Brewing’s success, apart from producing great beer, is its independence and steady organic growth. “It all started as a hobby, and we are trying to keep that sense of creative freedom,” says the founder. “We wanted to develop slowly and are still independent, which means that we can experiment and brew whatever we want.”

Last year, Stockholm Brewing launched 54 different beers, including unique editions for certain restaurants. The first beer, and still one of the bestsellers, is a classic IPA, and Stockholm Lager is also very popular. The brewery is known for experimenting with sour beer, adding grapes and berries, as well as barrel-aged beer. One of last year’s favourites was New Jersey Sour, a dry-hopped sour beer with hibiscus and blood orange, which is being brewed now and again when oranges are in season.

In February, two new beers will hit the market. First up is Almost Famous Brut IPA, the first of its kind in Sweden and available at 60 of Systembolaget’s stores. “This style suits us perfectly – bone dry, refreshing and with a nice citrusy hoppiness,” says Jakobson. Also new is the limited edition Apricot Wild Ale, a mixed fermentation ale with heaps of apricot. Later in spring, Stockholm Brewing is also launching two collaborations: a cryo pils with praised, Gothenburg-based brewery Stigberget, and a dinkel saison with renowned Brasserie de la Senne in Brussels. 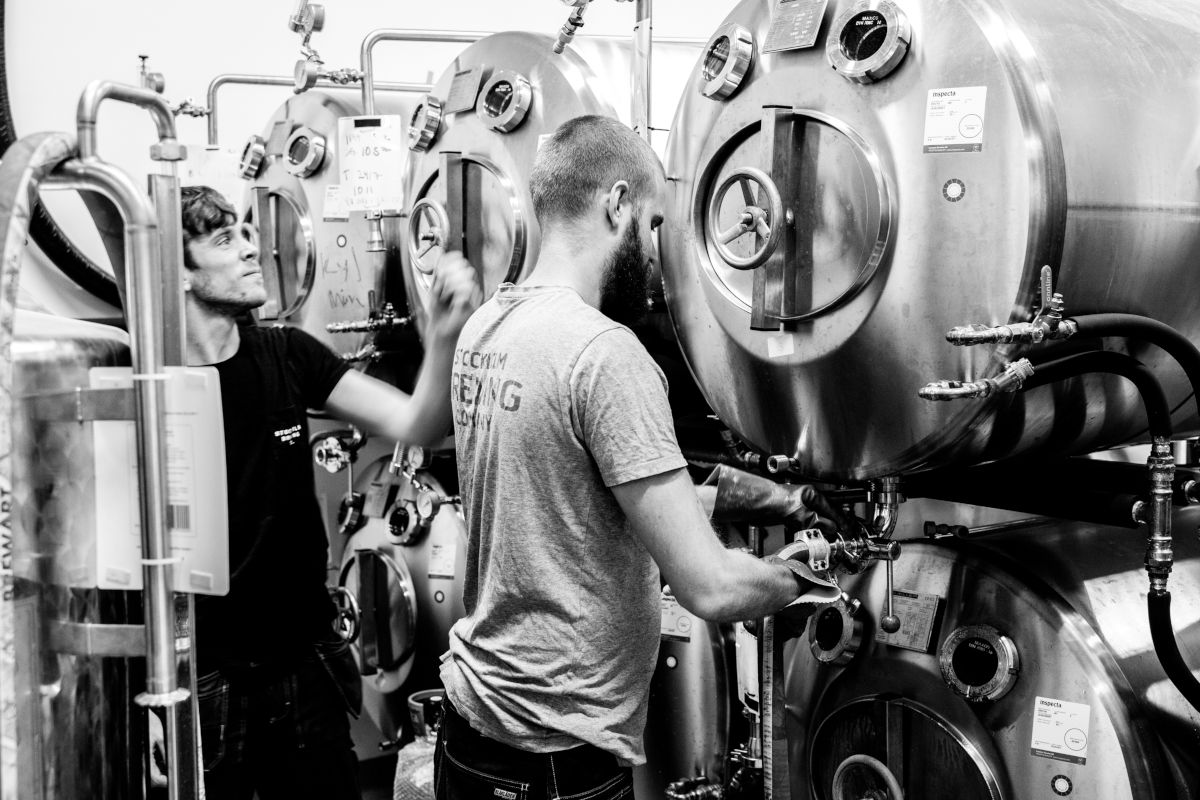 Brewing in a basement in Södermalm for some five years, the brewery eventually moved to Magasin 3 in Frihamnen last year. The old warehouse in Stockholm’s port houses art galleries and auction houses, and now its own brewery. With around 900 square metres, Stockholm Brewing has increased its capacity with four new tanks of 2,000 litres each and two new foeders (large oak barrels), allowing for production of more farmhouse-style beers.

In connection to the brewery is the new FARM Restaurant & Bar. Open from Monday to Saturday, it is an extension of the brewery with 20 beers on tap as well as delicious food. “Our vision is for visitors to be able to see how we make the beer, enjoy fresh beer from our tanks and have lunch or dinner while here,” Jakobson explains. “But we didn’t want the standard beer and burger combination – we wanted to offer something a bit more elaborate.”

FARM Restaurant & Bar is run in collaboration with organic farm Karshamra in Botkyrka and serves organic food produced locally. The restaurant is partly self-sufficient, growing its own vegetables and with cows and sheep that are fed with mash from the beer production; it even has an in-house bakery. The concept is from farm to table and back to farm again, serving what is available according to season and with a focus on sustainability and zero waste. Here, visitors can enjoy honest, simple and tasty food, and delicious beer of course.

www.stockholmbrewing.com Read the feature on issuu