ANTI: A new type of interference from Norway

ANTI stands for A New Type of Interference, and this is precisely their vision: to always deliver interference in their work, in the way they are with their clients and how they run the company. In 2008, two Norwegians, Kenneth Pedersen and Kjetil Wold, established the popular multi-disciplinary agency, and to this day, they are firmly convinced that everything can be challenged and done differently – in a better way.

The ambition from the beginning was clear. They wanted to start a small design agency with a focus on having fun, working internationally and building an agency that was seen as an independent brand. “It was especially crucial for us to challenge the established design profession while also challenging our customers to think differently,” says Pedersen, CEO and founding partner. “ANTI’s vision is still as relevant today as it was when we started ten years ago. We will continue to challenge how we work with both customers and employees. We now have almost 100 employees who come to work every day with a desire to challenge their profession, and we will continue to motivate and facilitate this in times to come.” 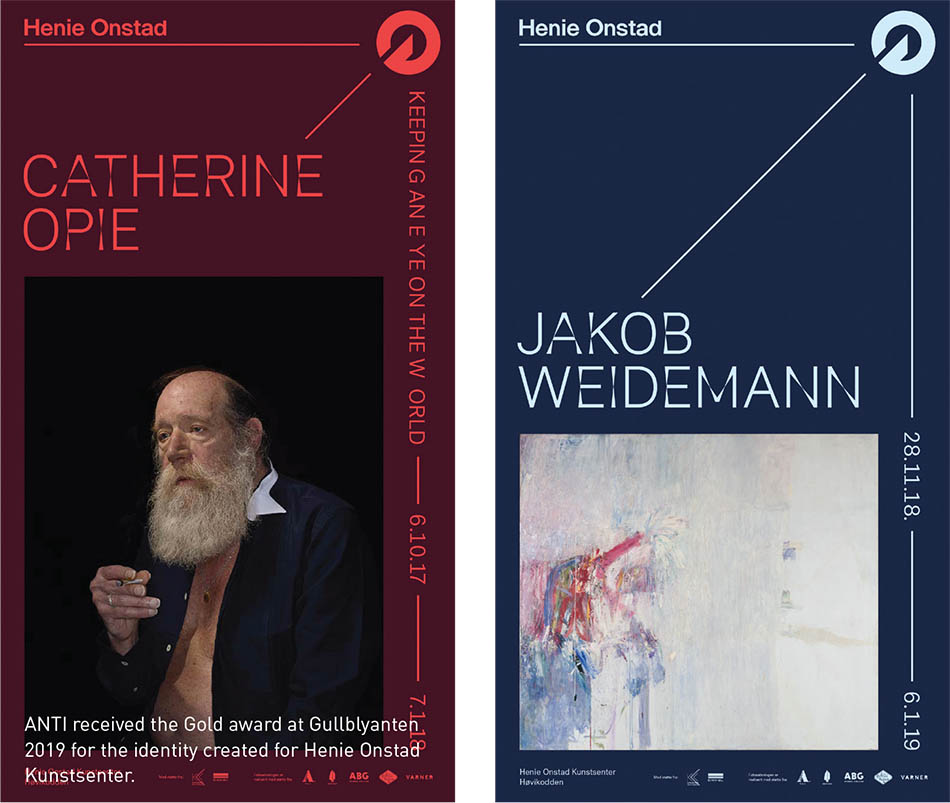 “When we started out, the foundation of the whole idea was to be an alternative agency, different to everyone else. We wanted to be like a little punk band that did cool jobs internationally. We went through many names, including Michael Jackson, which we thought could be a fun one, but it said nothing about thinking differently. We quickly became fond of the word interference and ANTI, which again refers to the punk culture we like so much,” says Pedersen. Soon, a new name for the growing agency was settled on: ANTI – A New Type of Interference. “This has become the cornerstone of everything we do, and all major decisions are made on the basis of interference.”

It quickly became clear to the two Norwegians that one of the most important parts of creating quality design work is telling interesting stories. “We recognised that the best design always depends on a strong and well-worked-out strategy and concept – it has to tell a relevant story. This is something we focus on a lot at ANTI,” Pedersen explains. They work in three stages: insight, interference, and impact. “Insight is the research phase: the gathering of information, workshops with our clients, market analysis, and competitor studies and so on. Insight must be the foundation of any strategy. Without insight, it’s impossible to know exactly where to aim and how to create interference,” he says. “Impact relates to both the end result and any documented benefit for our clients. It’s a cumulative effect of design excellence, production values, technical details, social impact and adjusted strategies. The impact of our work is ultimately what we will be judged on by our clients and our peers alike. As Carl Jung put it: you are what you do, not what you say you’ll do.”

Not long after starting up, the young company managed to retain its first international job for Pepsi Co. in the US, which at the same time resulted in more jobs for Norwegian clients. With the big demand, ANTI understood that they had to grow, but instead of focusing on developing their Oslo branch, they opened a new office in Bergen along with Endre Berentzen and Robert Dalen. “Because we always wanted to stay small, we had a fear of having too many employees. Our initial aim was to be like a small punk band, and everyone knows that punk bands never have more than five members,” Pedersen recalls. But, eventually, the employees needed more help. There were too many jobs for them to handle on their own, and suddenly ANTI became a big band of 13 people in Oslo and five in Bergen. 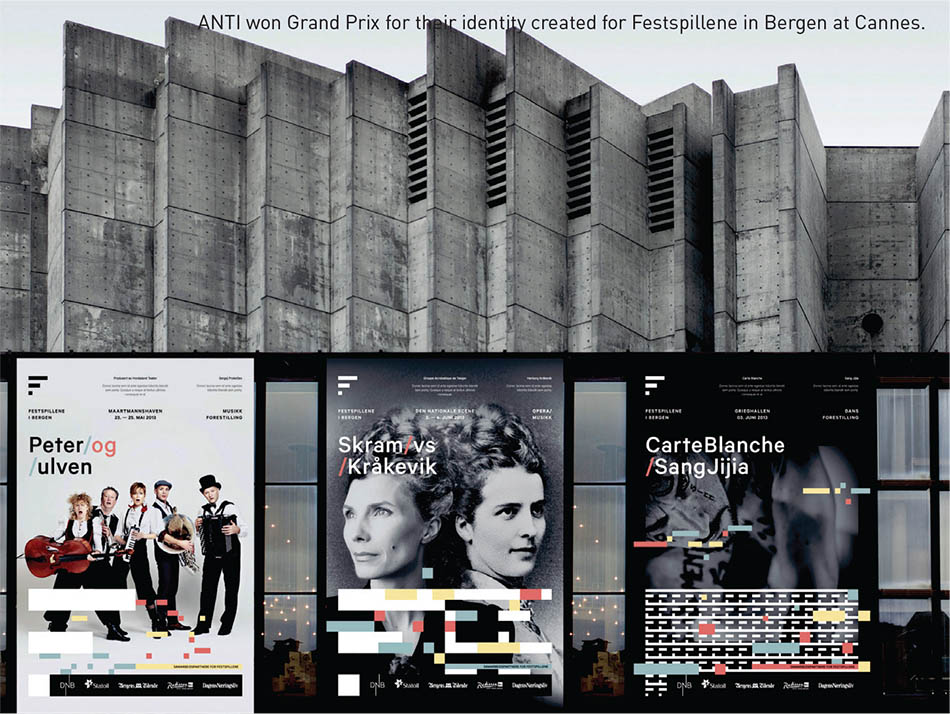 Being a brand and arranging Yai-Day

An important part of ANTI’s culture is built on exploring new business and product ideas, which often results in creating new, exciting facets of the company. By doing this, they can learn a lot about the needs and challenges that face their clients. “Our first ANTI project was making our own jeans brand called ANTI Denim. Our first jeans model was named ANTI SWEDEN. We had our own fashion week, which we named Fashion Week in HELL. Hell is a village close to Trondheim in Norway, and suddenly we had distribution and fans all over the world. We learnt a lot from this process, about production, distribution and quality control – to name a just a few things,” says Pedersen.

After ANTI Denim, the company started its own magazine, Ingrid Opstaditing about Norwegian creativity. After 13 issues, it was distributed in more than 20 countries, and the editor was voted as one of the top ten editors in the world. Today, the growing company is working on two ANTI projects: FARA Cycling, which retails high-end racing bikes for tarmac and gravel, as well as a music initiative called nstrumental. ANTI nstrumental is a film series that showcases the most exciting, current music artists. Each episode is comprised of two key elements: a documentary, and a live concert.

“As a result of these projects, we recognised that our employees were highly motivated to create business solutions that are not always the result of the needs of a preexisting client. In response to this, we have made the last Friday of each month into something that we call Yai-Day. All of our employees get the day off to explore something they think is interesting. They can work on a new ANTI project, learn something new, go to the museum or something else they find inspiring. At the moment, we are working on our skateboard brand, developing a city garden on our roof, brewing beer and a lot of other projects,” says Pedersen, adding: “Opportunities exist everywhere.”

Ten-year anniversary and a new identity

In the autumn of 2018, ANTI counted its ten-year anniversary, something that was celebrated both with a trip to Barcelona for all the employees and by developing a new brand identity. “Our identity is an ANTI identity, which rather than exist on top of or as a signature below content, is found in the hidden or unsaid of content itself. It does not try to steal the attention away from the content itself, but rather, is placed in the subconscious, through the lack of initials, as a quality signature and important part of what we do, our products and our content,” Pedersen explains.

ANTI began with a strong focus on design, and over the years it has grown into a multi-disciplinary agency, offering a range of services in design, strategy, advertising, communication, content services, TV productions, digital services, PR and influencers. Today, ANTI has offices in Oslo, Bergen, Trondheim and Hamar, as well as a small team in the USA. Having multiple offices makes it possible to work with both local and international clients, while giving access to the widest talent pool possible.

Asked if the agency has a quintessential design expression, the CEO does not believe they do. “In the early years, we were probably quite dark. Today, we are not guided by a style, but instead we begin by developing the right strategic starting point for achieving the goals of our clients. We are very concerned with distilling their insight so that it results in the right effect. In addition, we always want to challenge and deliver solutions that will stand out from the crowd,” Pedersen further explains.

International ambitions with emphasis on Norway

ANTI works with clients from all over the world, so they certainly have international ambitions. That said, their main emphasis is on Norway. “A common thread for all of our clients is that that they come to us to be challenged and really look at their problem again. We have had the opportunity to work with a wide variety of brands, such as the New York Times, Nike, Hyper Loop, Coop, Posten / Bring, Telenor Global, Kari Traa, Kunstnernes Hus, Hennig Olsen Is, and many, many more. We also work with start-up companies and small projects that need to push a specific expression or style to challenge their target audience,” says Pedersen.