Kanalbyen: The all-encompassing city of the future

Fredericia is a beautifully located city in Denmark with views over Lillebælt (‘The Little Belt’) and with fortifications from the 17th century still surrounding the city. It was famed for its industry during the industrial revolution; however, in the modern age, that industry has left the city. Instead, a new area of the city has been opened up to create space for Kanalbyen, a new development aiming to create a modern, inclusive city.

“The whole project is focused on the long-term. This isn’t something that’s going to quickly appear and be over and done with in a year or two; instead, we’ll be developing the harbour front over the next two decades in order to do it in the most sustainable way we can,” explains Tim Halvorsen, project manager of Kanalbyen. Kanalbyen directly translates as ‘the Canal Town’ and makes the most of its location with views out to the sea and in the south-eastern part of the city.

The new city plan follows in the footsteps of the original city plan from the 1600s, incorporating canals, new roads and buildings in an area that used to house a big factory and a shipyard. “The new and old are combined within Kanalbyen, and we’re stitching the original city together with the new parts to create one united city.”

The new development, of which around 20 per cent is finished or under construction, will be mixed-use, creating space for homes, businesses, shops and recreational activities. “We’ve already started to involve the community and make the area a space where people want to spend time. We’ve created a container city with artworks, garden patches and sports zones, so that everyone can use the space already. It’s important that the community is involved in what’s going on and also has a say in how they use the space,” says Halvorsen.

The whole area is also focused on sustainability, a theme implemented in four ways – economically, socially, health-wise and environmentally: economically by building to suit the demand and what people can afford; socially by including a mixture of uses and by involving the local community to ensure that it is an area that everyone benefits from; health-wise by creating spaces for physical and mental well-being; and environmentally by building responsibly and including long-term solutions such as raising the ground level to protect the area against rising sea levels. “I’m incredibly proud of this product due to its wide focus and the fact that it is more than simply new buildings and infrastructure,” says Halvorsen. 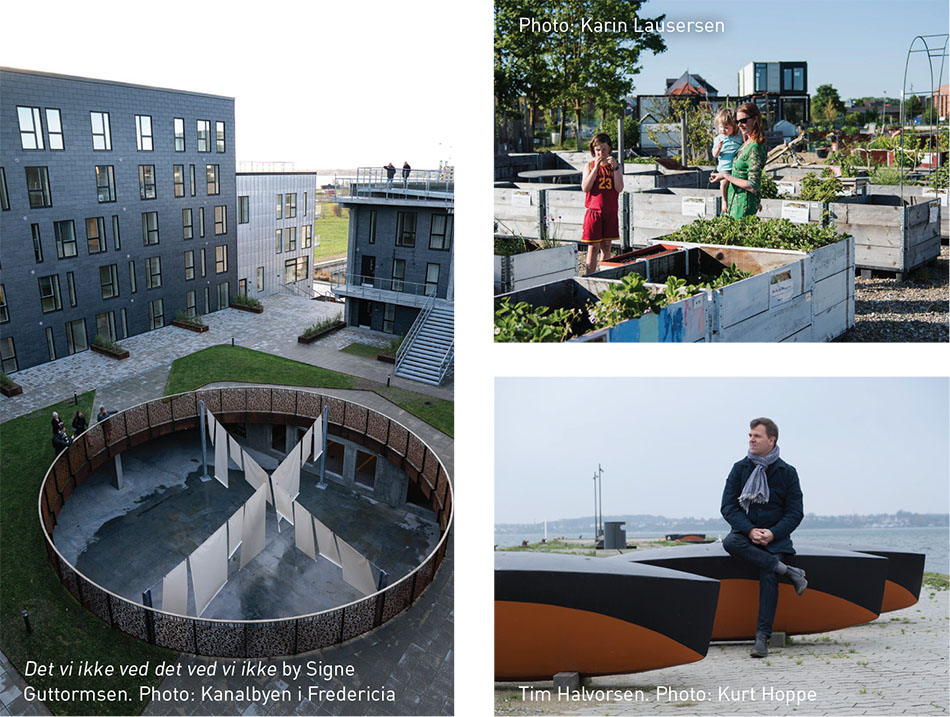 Art at the heart

Another way in which Kanalbyen has considered its future is by including art in the development at a very early stage, through collaboration with Statens Kunstfond. “Art creates value, and what Kanalbyen has done is both brave and forward-thinking,” says Kirstine Roepfstorff, an internationally renowned Danish artist who has developed the integrated art piece Hydra for Kanalbyen. Hydra uses water, light and plants to give life to the multi-storey car park that will house the residents’ cars.

“Car parks are essential, but they’re usually lacking in life and a place people don’t consider as anything more than convenient, but actually they can be spaces where people meet each other and experience something,” she explains. The roof of the parking lot will have rainwater collectors creating an organic system within the concrete building. The huge facades will be covered in concrete murals, making for an interesting focal point in a building that is otherwise mostly ignored.

Signe Guttormsen is another famous Danish artist who has been working with Kanalbyen in creating site-specific artwork, centred around an opening that allows one to gaze down to a lower courtyard and parking lot. The artwork pays tribute to the workers of the factory and the women behind them during a period in which Denmark underwent a change from an industrial society to a knowledge-based society. “The work is a free abstraction of spaces of the past in the form of linen hanging on lines and layout drawings of the old factory site cut into the steel railing, and thus combines the past and the present,” Guttormsen explains.

“The people of Fredericia are very aware of their history, and it felt important to include that in the art, while at the same time referring to our own actions and what we can learn from the past and how we live now, especially from a climate perspective, as well – from polluting factory to sustainable and healthy city.” The installation is called Det vi ikke ved det ved vi ikke, or ‘What we do not know we do not know’.

Kanalbyen in Fredericia is and will be an integrated, modern, inclusive and sustainable part of Fredericia, where locals and newcomers alike will benefit from how well thought-out the planning process has been. It is bound to be one of the most interesting developments to follow over the coming decades.

Kanalbyen in Fredericia in brief: Space for 2,800 jobs and 1,200 homes Developed by Realdania By & Byg and Fredericia municipality Six artworks throughout the development in collaboration with Statens Kunstfond www.kanalbyen.dk

Felix Conference Center: The ideal setting for your next event

Morning Train: Full steam ahead – fuelled by passion and people