Martin Schwartz: The soul of a city in a single print

Contemporary illustrator and graphic designer Martin Schwartz’s newest series of posters gives you something not even a photo can deliver: the essence of a city in a single frame. Sold in thousands of copies all over Denmark, his Copenhagen poster reflects the feel of the Danish capital, boasting hidden gems and atmospheric colour-plays that invite people to explore. Intending to work his way around the world, Schwartz can already tick off Berlin, soon to be followed by New York.

Martin Schwartz’s city adventure began with his job as a writer. As a new contributor at an architecture magazine he was determined to learn everything he could about urban planning, unaware that the experience would change the course of his work.

“I suddenly started wondering what makes a city attractive. Why are some places nice to be in whilst others are not? The question kept lurking in the back of my mind, until I came to the realisation: what really makes a city tick is when it sparks people’s curiosity and invites them to explore,” explains Martin Schwartz, who, after numerous mind-bending walks, sketches and research, created an authentic poster of his own city. 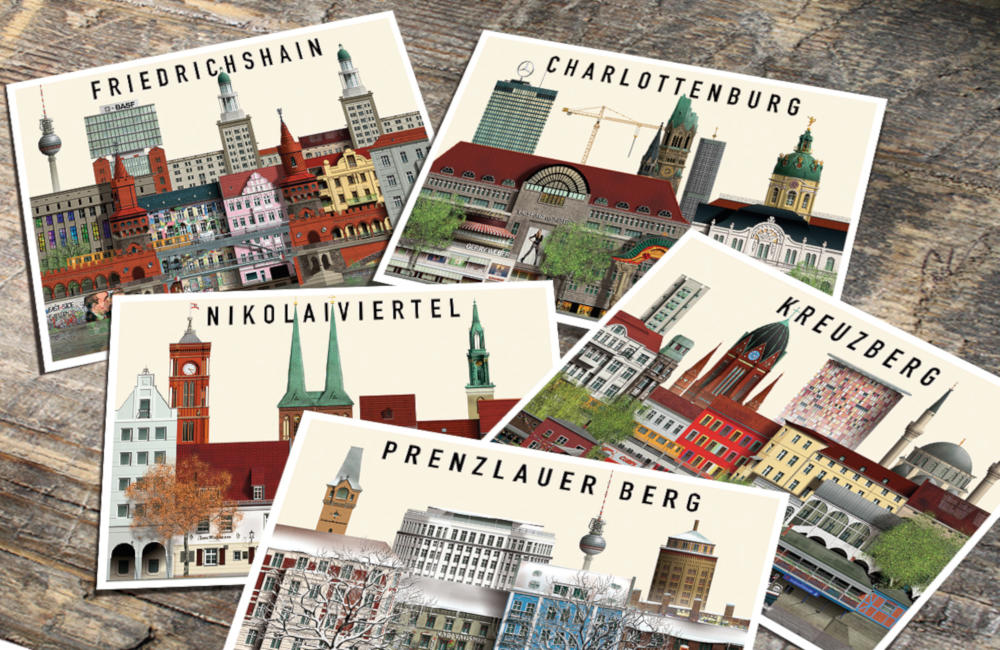 A city in red

“The aim was to not only create a poster that really captures the essence of a city, but also one that people can truly explore, a print you can gaze at whilst constantly discovering new things about it,” reveals Schwartz, who is not unfamiliar with visualising his thoughts. Since he taught himself how to use graphic design programmes and embarked on a fruitful career as a freelancer, he has illustrated strategies for companies and created gripping postcards and posters for people’s homes. However, the new city series takes things to a new level. His enrapturing Copenhagen poster has been bought by tourists and Danes alike, celebrated for its ability to capture the city’s atmosphere in a way that makes Danish expats a little homesick.

“Prioritising what to include was rather difficult. It forced me to look at the city in new ways. I noticed how the historical features dominated the city from above, while the ground was dictated by old and new, ugly and pretty. It was all a part of it, a kaleidoscopic city dominated by red. I even included the local-known graffiti ‘What is Møller drinking?’ – a saying amongst drinking Danes,” says Schwartz. Once his home town was on print, it was time to cross the Danish border.

From Berlin to New York

Berlin was next, a city bursting with diversity and trends, still carrying marks from the war. Schwartz decided to cycle around the city and speak to the locals, seeking out those elements that truly define Berlin.

“When I draw sketches for my posters it’s always with great respect for the city I am trying to depict. They are like photographs without perspectives. The viewer can simply see everything without being restricted by a certain angle,” explains Schwartz, and while Copenhagen is a place defined by its cosy feel, Berlin has a different vibe – a diverse city-feel defined by its multicultural population. Therefore, Schwartz decided to include a church, mosque and a synagogue.

“My posters tell the history of a city through its buildings. For example Copenhagen is very different to Berlin, which has been more affected by the destruction of war, leaving the city full of Plattenbau buildings and half-destroyed historical icons such as the Gedächtniskirche. This is a part of its history,” tells Schwartz, revealing that one gaze at his posters isn’t always enough. The longer you look, the more you will discover. 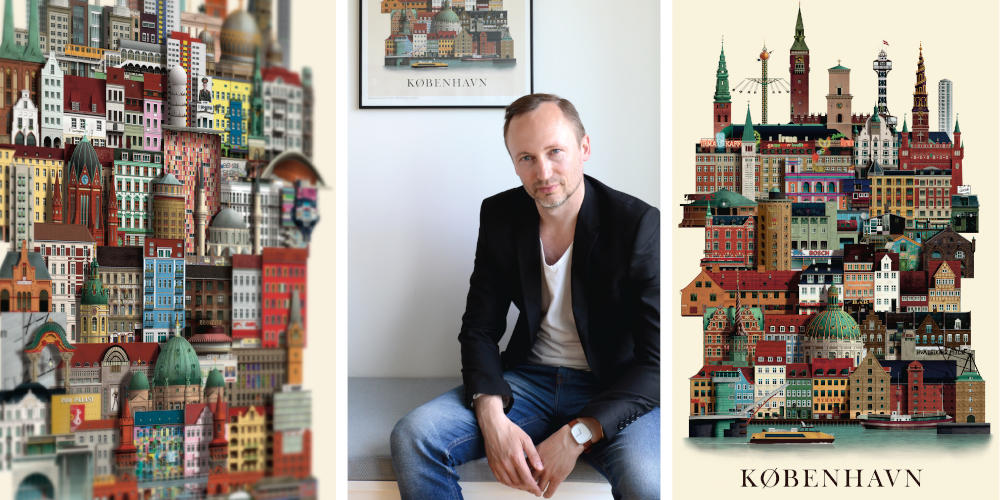 A desire to explore

“My dream is to visit as many cities as possible, portraying unique capitals around the world. In the end I am hoping to publish a book with my prints and share my thoughts behind the work,” tells Schwartz, who will be flying to New York in September, where the same process of exploring will be put to use.

As an illustrator and creative, he is not defined by a particular style but rather by a commitment to explore and have fun whilst doing it. So far he has worked with clients such as Maersk, Carlsberg and Novo Nordisk. Together with his friend and colleague, Mads Berg, he has even illustrated zoo maps for both the San Diego, London and Los Angeles Zoos. Now, Martin Schwartz’s magic touch brings cities to life in wondrous shapes and colours, putting forward a new way of discovering capitals. Whether you are a Copenhagener who can’t get enough of your own city or a tourist wishing to be forever reminded of your newfound love, Martin Schwartz’s posters are bound to evoke emotion.