Souls of the sauna

Finland, a country of just under five and a half million people, is home to more than two million official saunas – and another estimated million unofficial ones. Finnish sauna is more than an occasional treat or a luxury spa trip; it is a place to relax and reconnect with yourself and loved ones away from the bustle of everyday life, and it has been for millennia. As Scan Magazine discovered at the second World Sauna Forum, an increasingly globalised world brings both challenges and opportunities: how can you bring the benefits of the Finnish sauna to the rest of the world without losing its authenticity?

Finnish iconography abounded before we even set foot in Jyväskylä, the central-Finnish city that hosted the 2018 World Sauna Forum. While the cabin crew was busy handing out delicious bilberry juice, the half-hour flight from Helsinki revealed a respectable number of the country’s famous 1,000 lakes twinkling up at us amidst pine forests, ski lanes and the odd speedway track. In the middle of the Finnish Lakelands, Jyväskylä Airport featured a single baggage carousel overlooked by a massive signed ice hockey jersey. Could things be any more Finnish? Yes. Yes, they could, as it turned out.

The birch trees were beginning to yellow just in time for autumn, and we passed a few more massive, quietly misting lakes for good measure on the drive to Jyvälyskä, the regional capital known for its university, industry and architecture. After receiving our room keys and a set of white towels, bathrobes and slippers, it was politely suggested that we get changed and shower immediately in order to make the most of the pop-up sauna village that had been set up for the Sauna Forum right by our delightful Hotel Alba – where each suite naturally featured its own sauna too.

Clad in swimsuits and fluffy hotel slippers, a few of us foreign visitors shuffled our way through the freezing afternoon darkness past most of the world’s sauna experts over to a mysterious sauna boat on the shore of Lake Jyväsjärvi that we had spotted from our hotel suites. Climbing aboard the wooden vessel, we located a steamy door and hesitantly entered the dark, humid little sauna room and sat down in blindness. “Hello there,” said a deep, friendly voice from the corner of the cosy, sweet-smelling room. Illka Länkinen, owner of Lapland’s SantaPark Arctic World, greeted us sweaty with a beer in hand: “Welcome to a proper Finnish sauna. Have you jumped in the lake yet?”

A boat-style sauna in the pop-up village. Photo: Gitte Merrild.

If you take anything away from reading this, let it be this: first, there probably is no better way to be exposed to Finnish culture than through their saunas; second, Finnish sauna is nothing like those dank, scorching and questionably hygienic swelter-boxes you might have experienced down at the gym. The pop-up sauna village revealed a whole new world of saunas and sauna experiences, from a little Christmas-decorated sauna whose walls played the somewhat startling shrieks and murmurs of Finnish forest animals to an easily constructible tent sauna that offered peat treatments in the dark.

The calming scents of the wood; the easy-going, disarming conversations with other semi-dressed people in the half-dark; and the hiss of the water hitting the scorching stones, creating the hot steam that relaxes your muscles to the core, make for a very special experience. The heat is intense, yes, but it is breathable and relaxing, and easily altered by adding more water or opening a door. It is not a toughness competition, and the cool breaks are an essential part of the experience, whether through a dip in the lake or a modern cold shower. “It can be a lot for first-timers to sit here semi-naked and see that it says 160 degrees on the thermometer,” Länkinen later admitted. “They might panic and think ‘that’s what I cook my chicken at!’. We need to convince non-sauna-going people that Finnish saunas really are relaxing, safe and worth a shot.”

That became one of the main points of discussion raised at the next day’s World Sauna Forum. Held at the city’s old worker’s club-cum-conference centre, designed in the 1920s by Finland’s perhaps most famous architect and Jyväskylä local Alvar Aalto, the forum delved deep into the question of what sauna should entail, what should be allowed, and where the sauna institution should be going in the future. The sanctity of the Finnish sauna tradition faces global rivalry. Experts from as far away as Japan and Taiwan explained the rise in popularity of their own high-tech steam rooms. When a point was made that tens of millions of people enjoy the more showy, entertainment-focused central-European Aufguss sauna, the moderator’s reply that evidently, tens of millions of people could be wrong, received rapturous applause – by Finnish standards – only matched in volume by the boos when someone mentioned that many people believe sauna is Swedish. Somebody noted that Finns have taken the sauna lifestyle for granted for so long that it can be difficult to even begin to explain quite what it means to outsiders. Is it possible to export Finnish sauna at all? A lot of experts thought so, though they differ on what exactly that entails. 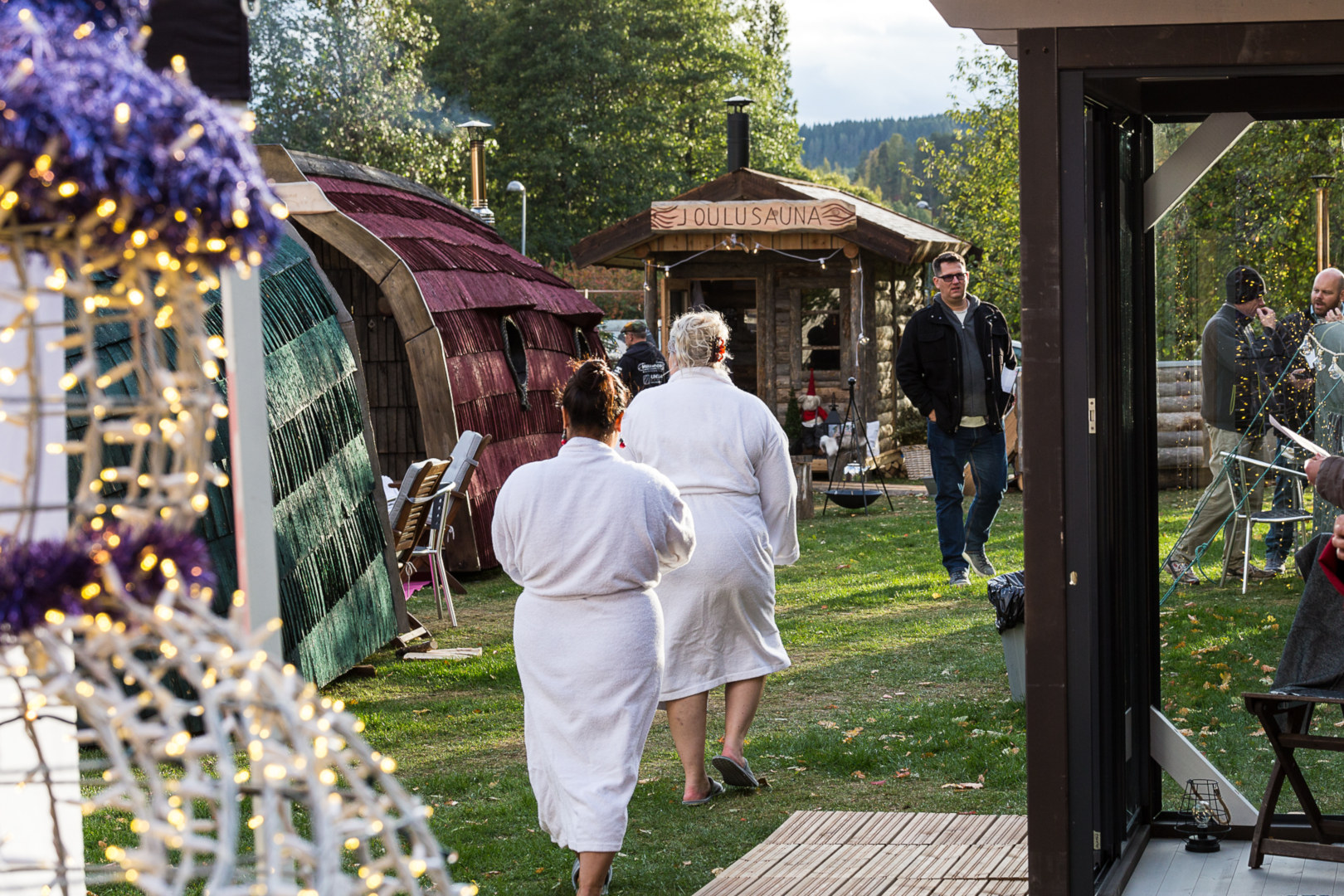 “Finland has 8,000 years of experience of how saunas should be done,” Jake Newport, managing director of Finnmark Ltd., remarked. “Finnish sauna means quality, entails a particular lifestyle and should be something to be enjoyed rather than endured. In places like the UK, we need to reboot our conceptions of the sauna – to learn and import high-quality saunas from Finland in order to get the mental and physical health benefits that it can bring.”

Like other Fennophiles leading a quiet revolution at home, Newport believes the time for Finnish sauna abroad is coming – possibly aided by the recent growth of the mindfulness philosophy. “Proper sauna is about the full sensory experience,” says Katie Bracher, owner of Beach Box Brighton. “You should hear the rain, feel the birch, smell the pine and so on. Go for a dip in the sea to cool down and have some sauna snacks. I think it’s possible to adapt the Finnish sauna to the local environment, but you need to have a guide and know how to do it properly. We need to spread the sauna message.”

It was when Mika Meskanen, founder and president of the British Sauna Society, moved from Lapland to Berlin, then the UK, that he realised how big a role the sauna had in everyday life back in Finland. “I really missed it,” he says, “so I built my own sauna from an old greenhouse, a used Swedish engine and scraps off Ebay. Finnish saunas don’t have to be fancy,” he says. “It’s not about the latest model or the fanciest technology. They should be welcoming places and hot enough to be hygienic. Apart from that, it’s as much about the philosophy behind them: having an uncomplicated, accepting and natural relationship to your body, yourself, and others.”

Heidi Säntti from Sauna from Finland agrees. “Going to the sauna is not seen as a luxury or a treat as such, it’s more of an essential weekly hygiene and relaxation ritual for a lot of Finns, almost like taking a social shower. Most of us have one in our house or a communal one in our apartment block.” The word ‘sauna’ is said to be the only word to enter the English language from Finnish, and Finland’s sauna culture is currently being considered for UNESCO heritage status in Finland. “It was an essential space for Finns – it could heat you up in winter and used to be the most hygienic place one owned,” Meskanen adds. “Throughout history, many Finnish women have actually given birth in the sauna. My father was one of the last people to be born like that – out in the forest after the war. The sauna had guaranteed hot water and was safe from bacteria thanks to the high temperatures. It’s difficult to encapsulate everything that the sauna means and has meant to Finns.” 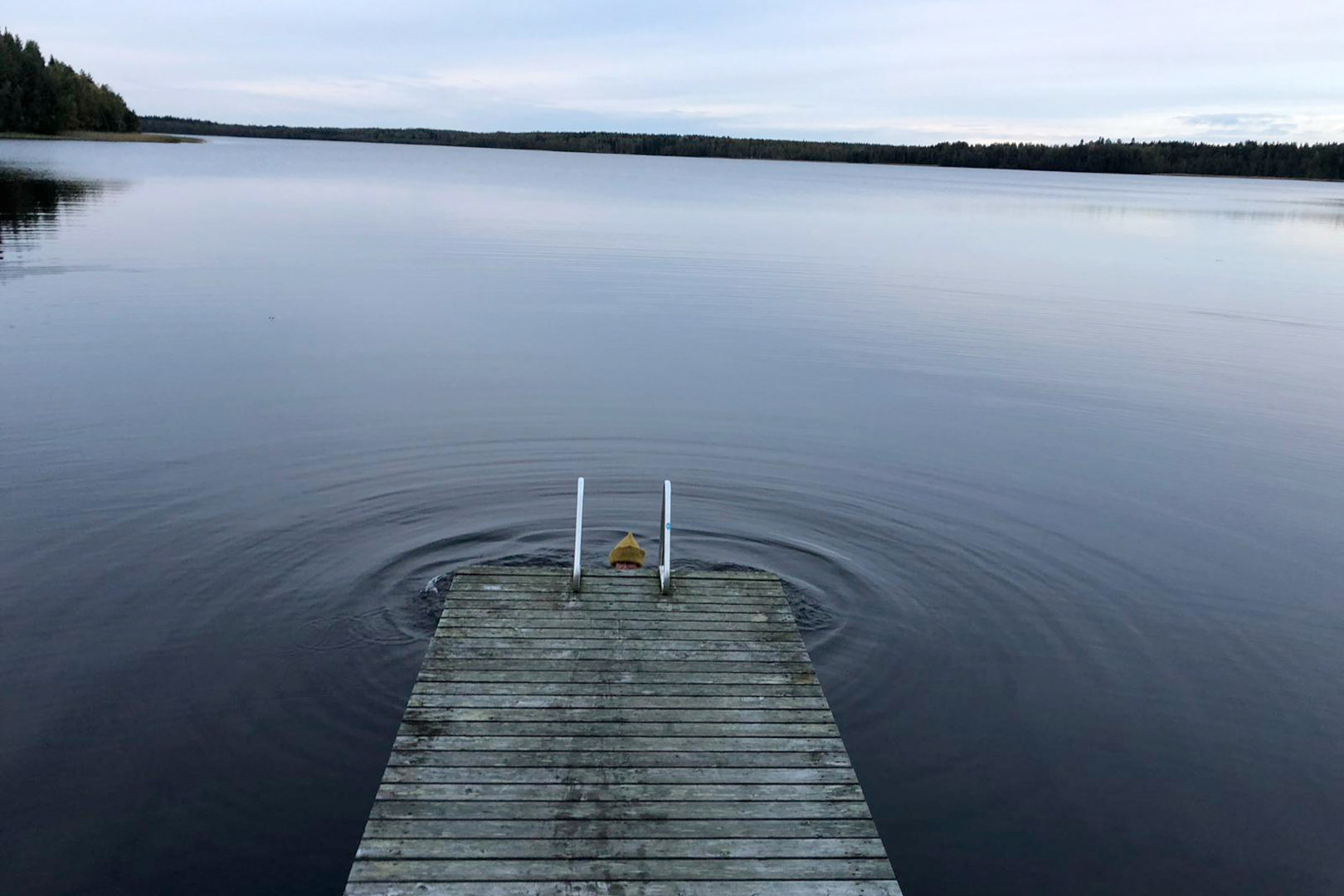 The lake at the Northern Lights Resort was refreshing to say at least. Photo: Gitte Merrild.

Eight saunas and a sauna forum later, we leave Jyväskylä and Alvar Aalto’s many iconic buildings behind to travel northwards to try out the Northern Lights Sauna Trail at the Revontuli Resort, before going back to our tedious, sauna-less lives. Maaria Alén, a woman with extensive training in sauna history and rituals, treats each of us to ‘vihta’, branch whisking (it is both invigorating and relaxing, trust us), and guides us through the spiritual rituals connected to the oldest and heaviest type of sauna: the smoke sauna, which has been around in Finland for thousands of years. “The sauna was a spiritual place,” she reveals. “It connected you to your ancestors and to your inner self. The steam, or Loÿly, that rises up off the sizzling hot stones represented the spirit, breath or soul of the sauna; all that has gone before you and everything that you are.”

No matter where you are in today’s busy, disruptive and overstimulated world, it seems like the ancient lessons of the authentic Finnish sauna are just as relevant as ever: relax, breathe, be present and let yourself be open and vulnerable to those around you. The Finns were recently, and a little surprisingly, perhaps, deemed the world’s happiest people. Unsurprisingly, an hour of social sweating; hot, deep, intense muscle relaxation; and mindfulness every once in a while, may play a part in their contentment.

Tips for mastering the Finnish sauna:

– Drink plenty of water and shower before and after the sauna.
– Take short breaks to cool down in the air, shower or a lake.
– Heat rises, so the top benches will be hottest.
– Remember to breathe and relax.
– As a rule of thumb, swimsuits in mixed-sex saunas; no swimsuits in same-sex saunas.

To find a proper sauna in the UK:

Ten ways to be inspired by the Nordics for a healthy, happy 2020

Oura ring – A smart ring to health and happiness