Greenland, at 2,600 kilometres from north to south, is the largest island in the world. Much of the landscape is categorised as cold desert, and it’s bisected by the Arctic Circle, which arcs 200 kilometres from the edge of the ice cap to the west coast fishing town of Sisimut.

Most of the population lives along the coast, where the archetypal small, gable-roofed timber houses freckle the uneven terrain in bright clusters of red, blue and yellow. Over a quarter of those people live in the capital, Nuuk, which is dealt some of the island’s wildest weather.

Wet, gale-stricken and prone to sudden temperature changes that bring alternating frost and thaw, Nuuk’s climate poses unique challenges for the design, construction and maintenance of its buildings. 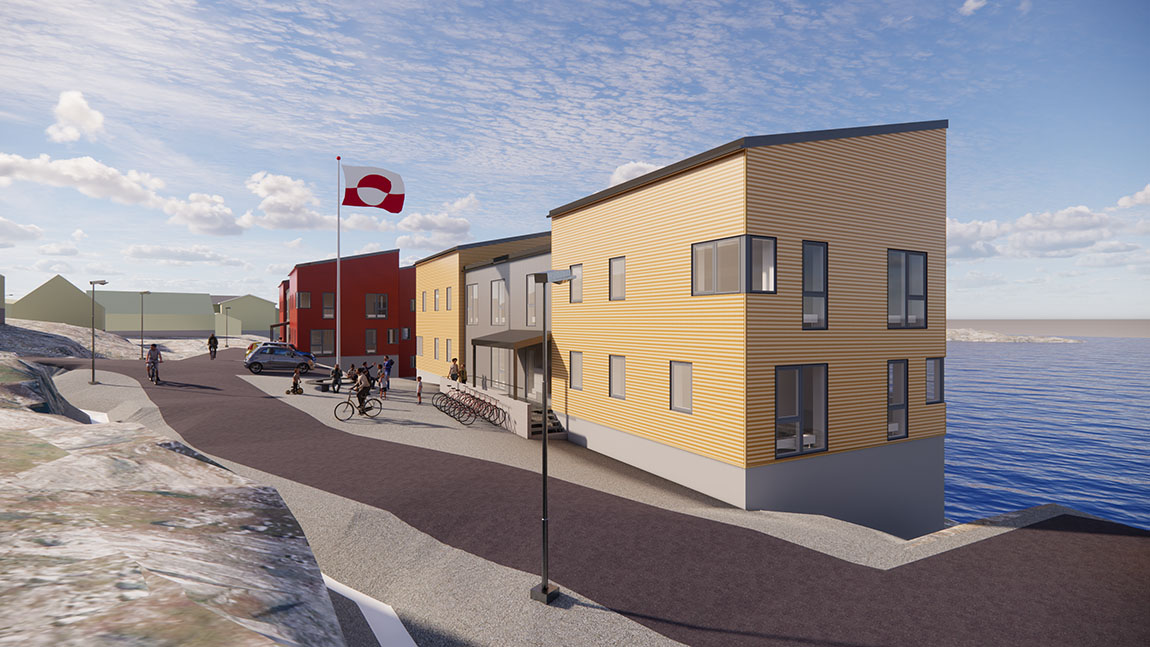 Nobody understands this better than local architecture firm, TNT Nuuk. The studio’s approach is supported by 40 years of knowledge and experience of Arctic architecture. “We started in 1963 in Greenland,” says owner and director Flemming Berger, who is based in Nuuk. “Our projects span everything from small and large-scale renovations, resurfacing façades and building houses, to huge schools, colleges, care centres, hotels and airports.”

In fact, TNT Nuuk’s unusual expertise is frequently called upon to advise external projects across the whole island. “We think Greenlandic. We understand the special climatic, geographical and geopolitical features here. So TNT Nuuk can take care of all phases, right from the conceptual and financial planning stage to organising and supervising construction,” says Flemming.

Flemming’s right-hand woman, architect Helena Lennert, operates from TNT Nuuk’s Copenhagen outpost. “Our philosophy is, from the beginning, to analyse who will be using these buildings. What unique things do Greenlanders need from these designs?” she says. “That contextual understanding is the foundation, and it’s one we’ve built through years of researching, advising and designing in Greenland.”

An island without roads

A prime example of the studio’s approach is their ongoing construction of ‘standardkollegier’ – or ‘standard-design colleges’ – in Ilulissat, Aasiaat, Sisimiut, Nuuk and Qaqortoq. As a starting point, take two of the island’s unique social challenges. Firstly, there are no interlinking roads between towns and settlements. Materials, resources and people largely move around Greenland by boat or plane. “So if you’re young and living in a smaller town without a college, then you have to move, and it’s expensive to get home. You don’t just go home for the weekend,” explains Helena.

Secondly, the dropout rate at Greenlandic colleges is high. Around 60 per cent of the population has no education beyond secondary school, and national statistics recorded in 2020 revealed that 32 percent of 16 to 25-year-olds eligible to work were neither in school, nor employed.

Flemming elaborates: “You’re picked up at the airport and parked in front of a door to a college room and told, ‘that’s where you’re going to live – there’s a bathroom, kitchen and bed’, then the door is closed, and the welcome party leaves.”

Some of these students come from families of eight children. “So how do you think that goes?” asks Helena. “It can be very lonely.” 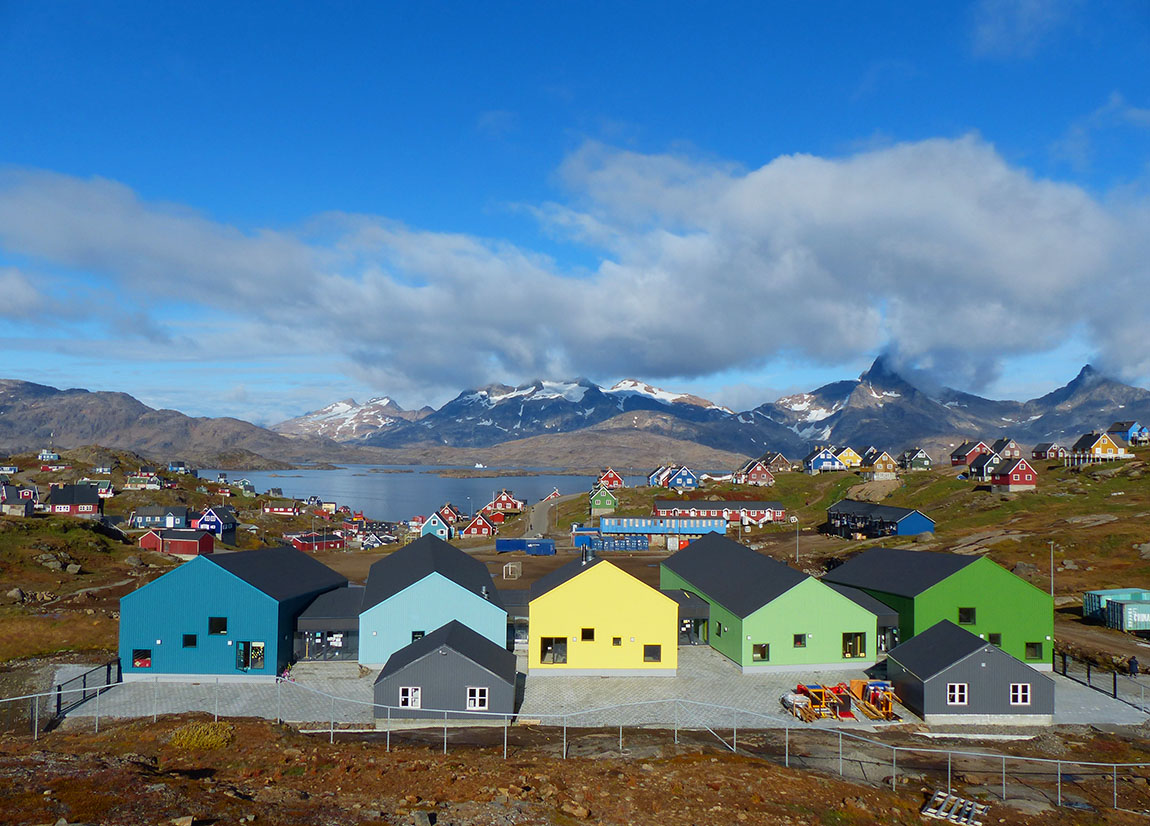 The day care centre in Tasiilaq.

To combat this, TNT Nuuk puts the social needs of the students at the forefront of their design. “A huge focus was to create meeting points – a shared kitchen to learn to cook, shared lounges to watch handball, and to move away from the conventional long-corridor dorm format, which is very isolating,” says Helena. “We’re trying to create something that’s not just an institution but a home, where you’re part of a community. You make friends, maybe fall in love.”

The result is a flexible network of four different dormitory types, which house combinations of individuals, small families, pairs and group collectives, and which can be adapted to any one of the five Greenlandic cities, and beyond.

But TNT Nuuk’s projects are about more than function. Reconciling the aesthetic traditions of Greenland with architectural innovation, the studio rebuilt the dilapidated Atuarfik Mathias Storch school on a mountain slope in Ilulissat. The school is designed as a cross with four lengths that converge at a central meeting point, and features a broken, angled roof. Aside from being highly resilient, the intersecting roofs help to break down the scale of the otherwise large building, so that it relates elegantly to the surrounding landscape.

Meeqqerivik, a day care centre in Tasiilaq, is another example. The site is divided into five brightly coloured, individual buildings, each with the same monolithic form as a typical Greenlandic family home. The result is playful and understated – a homogenous institution that resembles a toybox settlement. “Because Greenland is all small, red houses, we don’t just want to build big bricks to put people in that don’t suit the environment,” says Helena.

“The climate is another thing we contend with,” says Flemming. “In the north, the climate is milder; we don’t have those big storms and downpours. It’s extreme here in Nuuk, so the biggest problem is to ensure the building is weather-tight. It can get down to minus 20 degrees sometimes, so we have to make sure every construction can be adequately heated, with no thermal bridges.”

But TNT Nuuk’s biggest challenge may be yet to come. In the battle against climate change, The Green Transition is the maxim of every modern government – not least Greenland’s, which has recently announced intentions to join the Paris agreement.

Concurrently, the energy costs of ocean freight and air transport are garnering increasing criticism. “But all our building materials, apart from concrete, are imported by ship,” says Helena. “In Denmark, concrete is looked down upon because it’s not environmentally friendly, but in Greenland it’s all we have locally. We have stone and sand. So it’s cement we have to use.”

It’s a challenge that’s uniquely complex for island nations, but one that TNT Nuuk faces with enthusiasm. “We have to look at the variables we can change instead of just doing what we’ve always done. It’s about asking what we ourselves can contribute to the wider cause, and that’s exciting. How can we do more to protect the environment?”

It’s a timely question. Greenland is in the midst of a grand-scale development. Two new airports are being constructed in the largest cities, Nuuk and Ilulissat. “We’ve been involved in the whole process from day one,” says Flemming, “in planning, together with local building firms, and now advising the project. It’s an exciting process. The need for housing will also increase. When I moved to Nuuk 35 years ago, there were 10,000 people; now there are almost double. That’s a big change.”

At the same time, hotels and high-rises are springing up all over the island. Helena, who grew up in Greenland, sees it as a positive shift. “Today, people are happy about things like the modern-style hotel and conference centre that we designed in Nuuk. They found it liberating to see a different kind of façade.”

Greenland is moving with the times, and architecture must follow suit. TNT Nuuk’s unique understanding of the socio-cultural conditions, political forces and geographical challenges on the island have made them a lexicon of Greenlandic development.

Despite this, Flemming is humble about the studio’s achievements: “I’ve always had that attitude that things speak for themselves,” he says. “It’s an exciting period to be a part of. I look forward to a future of creative, sustainable and socially aware Greenlandic design.” 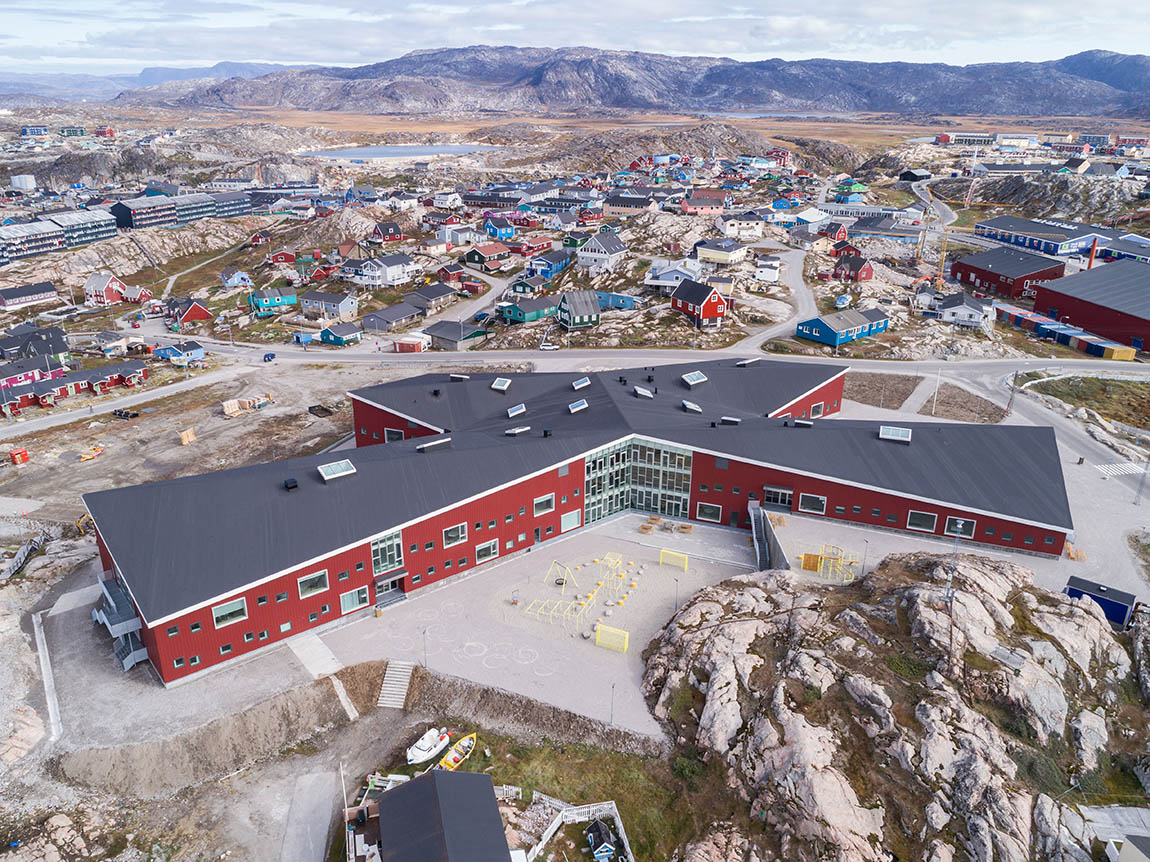 Per Knudsen Arkitektkontor: Architecture for a lively and ever-evolving city

ÅWL Arkitekter: ‘We can’t consume our way out of the crisis’