There are some things that you can only see in the dark. Imagine a cold winter’s night, the air is crisp in your lungs. You are standing in the middle of a mass of rolling hills left over from the last Ice Age. You know you are surrounded by four giant domes, but you cannot quite make them out. Everything is pitch black around you, but then you look up and see the stars more clearly than you ever have before. The Milky Way is displayed above you while a guide explains what you are seeing and what else to look out for.

“Those are the kinds of experiences that we’re good at here. At Brorfelde Observatory, the darkness is an attraction,” says Sarah Sohl, head of communications. Since 2016, the observatory has played host to school trips, workshops and meetings, team-building overnight stays and a large array of talks and stargazing events, aiming to combine learning and fun at all ages through activities as varied as firing water rockets into the sky and investigating the night through Denmark’s largest telescope. As the only place in Denmark, the observatory complex and the surrounding 40 hectares of land have been protected in order to preserve the area’s deep natural darkness from any light pollution. The result is a place like no other, where the trinity of the observatory, the dark and the unspoilt wilderness provides a wealth of experiences that you cannot find anywhere else.

A search in the dark

Brorfelde Observatory was built as part of the University of Copenhagen’s observatory department back in the time of the race to space. As astronomical observations were made more and more difficult due to Copenhagen’s increasingly night-lit streets and buildings, the university’s astronomers began to look for a spot outside of the city where the night sky would remain as brilliant as it ever were. At Brorfelde, by Holbæk, they hit upon a curious Ice Age landscape with a geology that would turn out to be extraordinary in itself. Between 1953 and 1964, the state-of-the-art observatory was built: four telescope domes, an extensive workshop, and a little village serving as the home of the numerous technicians, astronomers and assistant staff who would make up Brorfelde’s starry-eyed community, were added to the glacier-carved hills.

In 2016, Brorfelde Observatory reopened as a science experience centre where you learn to really see. “We want to be a place where everyone can discover something new with the help of their eyes and a bucketful of curiosity,” Sohl explains. “You go on a journey of scientific exploration – from the Earth’s innermost core right out to the outer reaches of the galaxy.” With its unique combination of astronomical, geological, technical and natural wonders, the centre encourages its visitors to see the way the Ice Age shaped the landscape at our feet and how the climate shapes the nature surrounding us. And inside, you get to explore the people and objects that made Brorfelde Observatory an integral part of the international discovery of space. 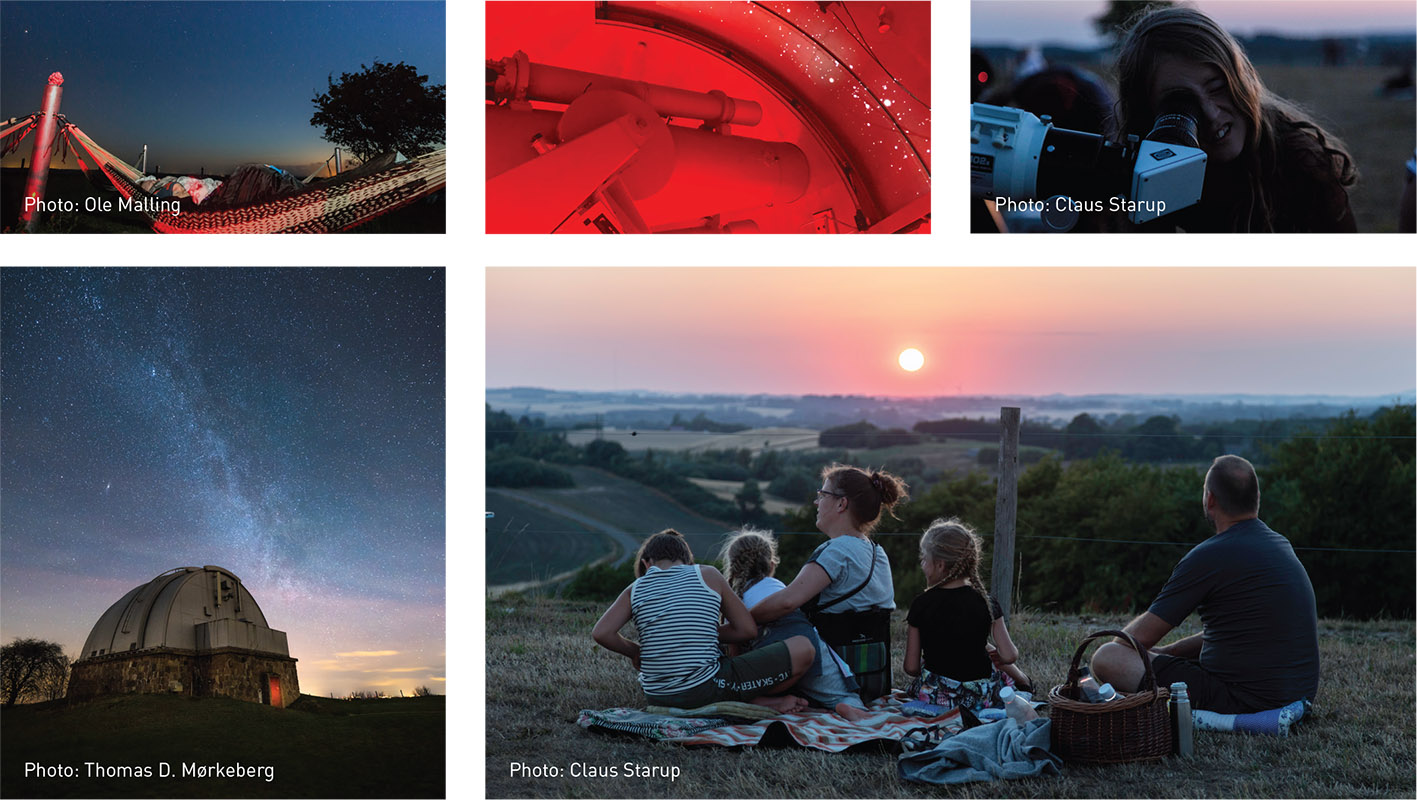 For nearly 40 years, Brorfelde Observatory has contributed significant discoveries and tools of exploration to what we earthlings know about the rest of the universe. Data from Brorfelde’s Meridian Telescope was used to calculate the trajectory of the Apollo 11 flight, which famously enabled man’s first step on the moon in 1969. The observatory fostered a unique set of expertise, combining engineering know-how and research ability, and thanks to the instruments built by the observatory’s expert technicians, Brorfelde’s astronomers discovered a string of asteroids, resulting in celestial bodies like ‘Holbaek’, ‘Brorfelde’ and even ‘Ceciliejulie’, named after the discoverer’s daughters. “On weekends and for special events throughout the year, our visitors get to experience the magical power of attraction of these alien objects at very close hand,” Sohl says. “One of my favourites is the iron meteorite, found in Lapland, which you get to touch – there’s nothing quite like holding something from outer space.”

The observatory also highlights its human stars. Seven of the old rooms have been brought back to the 1950s and ‘60s in order to tell the story of everyone who made up the special community at Brorfelde, from the cleaning lady to the astronomers. Their massive Discovery Telescope and Dome, built on location in the 1960s, remains Denmark’s biggest telescope and one of the greatest attractions in the daytime as well as for night-time visitors, who can arrange to sleep over in the centre’s two sleeping halls. “We can fit up to 45 overnight guests for school trips or company outings,” Sohl says. “It makes for a magical and unforgettable night to sleep among the stars.”

On top of its permanent facilities and constant exhibitions, Brorfelde puts on a broad range of events and talks throughout the year, including lectures on everything from space to geology by leading scientists, Thursday stargazing nights, and tours of the observatory and landscape. “We’re hosting an asteroid hunt this Easter, and lots of astronomical summer events too – see you there!” Sohl concludes.