With its majestic appearance and dramatic history, Fregatten Jylland is known and recognised by most Danes. However, this summer, visitors to the frigate will have a completely new experience as 18 Danish artists have transformed the old ship into one big art installation.

War vessel, spice carrier and school ship – built in 1860, Fregatten Jylland has had a dramatic life and many functions. Now, for the first time, the old three-master has become not just the carrier of, but also the inspiration for, a modern art exhibition by Art Association Jylland. The art exhibition Jylland på Jylland (Jutland at Jutland) includes 21 works of art in a wide range of media from giant sculptures to photography and video. “A lot of people want to polarise our cultural heritage, with the frigate on one side and modern art on the other side, but the artists in our exhibition show that they are two sides of the same coin,” explains curator Karen Louise Juhl Christensen. “That’s the starting point for the exhibition and for the works, which all interpret some aspect of the frigate – an aesthetic detail, the life of its sailors, or its long history.” The artworks are installed in every nook and corner of the frigate, around it and in its museum hall. 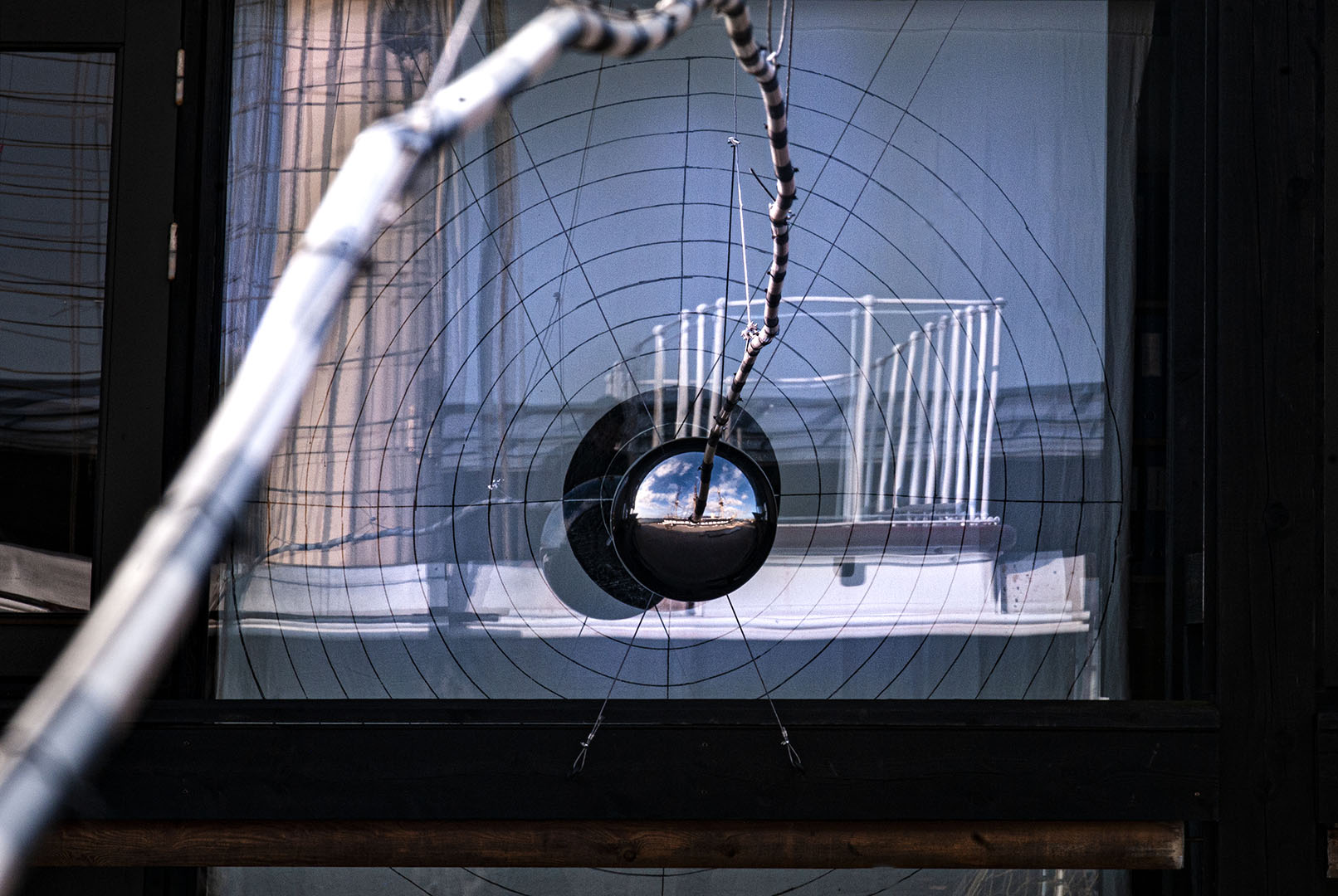 A parrot, a giant rope, and painted papier maché

While all inspired by the frigate, the 21 works by the artists of Art Association Jylland – who do not, despite the name, all come from Jutland – take hugely different approaches to the interpretation of the ship’s past and present. Built in 1860, the frigate took part in the Danish navy’s famously victorious battle against the Prussian-Austrian army in 1864. Subsequently, it sailed the West Indian Ocean as a trade ship, and later it served as accommodation for several generations of school kids visiting Copenhagen.

Among the works presenting a slightly humorous take on the many twists and turns in the life of the frigate is the video piece History is a Mess by Sonja Lillebæk Christensen. The video dramatises Fregatten Jylland’s history, with the ship itself acting as the storyteller. Meanwhile, the artist duo Randi & Katrine has, inspired by the stories of the parrots brought home on ships like Fregatten Jylland, created an oversized parrot lying under deck with its legs in the air. Like the duo’s two other works for the exhibition, the parrot plays with the fluid boundary between facts and tall tales that already exist in the communication surrounding the ship.

“The artists have made a lot of relevant comments on Fregatten Jylland and its history, and that has resulted in a both humorous and interesting exhibition. It’s 18 artists who take their starting point in their own practice – some work with graphic prints, some with fluid aluminium and others with installations; it’s all different, so that you can recognise each artist’s style, but you don’t have to. What binds it together is that they all reflect on different themes relating to the frigate,” explains Christensen. When entering the frigate, all visitors will receive a free catalogue listing all the artworks in and around it.

While enjoying the artworks, visitors to the frigate can also explore all the usual activities and sights on board the ship. The ship cannon is still fired twice every day, and the salute is just one of the many fun attractions for children. Others include treasure hunts, rope making, digital exhibitions and seafaring games, as well as the chance to climb some of the way up the ship’s 53-metre-tall main mast. So while the art adds an extra dimension to the frigate, it is doing just that: building and expanding on the original experience of a visit to Fregatten Jylland.

“People still come mainly to see the frigate, but they get something extra, and that’s something we’ve received a very positive response to,” says Christensen and rounds off: “Of course we also want to attract new people with the art. We want as many people as possible to come and enjoy the wonderful experience of our frigate, and the art exhibition is a way to enable that. Even if you’ve already been, it’s a chance to revisit and experience something new.”