Hotel Arctic: Luxury and ice landscapes on the edge of the Arctic Circle

Guests visit the world’s most northerly four-star hotel for a genuine nature experience amid ice fjords and northern lights.

It doesn’t take days to travel to Hotel Arctic in Greenland, but once you arrive it is easy to think you have come to a different world altogether. Its motto – A World Beyond Imagination – seems a fitting one. When most people think of Greenland, they probably picture a scene of ice, snow and sledge dogs. But it is a challenge to conjure up an accurate image of a landscape so different from any other European destination – you have to see it to believe it.

Located on the edge of Ilulissat, in Danish known as Jakobshavn, Hotel Arctic is the most northerly four-star hotel in the world. From Copenhagen to Ilulissat it will take just seven hours to enter this alternate universe of icebergs and wilderness.

A welcoming place to rest your head

As general manager Morten Nielsen explains, the hotel has an interesting history. “Hotel Arctic was originally established by Grønlandsfly, now known as Air Greenland, as a transit stop for travellers,” he says.

With no roads to connect cities and towns in Greenland, all travel is via air or sea, and when bad weather or technical problems stopped travellers from reaching their destination, Hotel Arctic was there to provide a place to rest their weary heads.

Over time, construction and decorative work have been undertaken to bring the hotel up to a four-star standard, and today it also boasts a five-star conference centre. The 90 rooms in the hotel, all with views to the expansive ice fjord, are luxuriously decorated and roomy – starting at 15 square metres, with the largest rooms being 25 square metres. The hotel also has five igloos away from the main site, where guests sleep immersed in nature.

Hotel Arctic welcomes guests from all demographics, geographies and all walks of life. “We still host stranded passengers and they visit alongside people who come here on holidays, as well as business travellers,” says Nielsen. “It is a really varied group.”

The hotel is open all year round. Peak season for travellers is the summer months of June, July and August, but, says Nielsen, spring time is very popular too. “March and April is when we still have some snow but you can go sailing; it is a time that gives different options.”

Greenland offers a full nature experience, and many of the guests visit Hotel Arctic to make the most of this. “People like to go out on the water, to see the icebergs and go on whale safaris,” says Nielsen. The hotel’s sister organisation, Greenland Travel, offers luxury huts outside of town, making it a popular trip away from the town. “People stay in them for a couple of nights and go on hiking trips from the base.”

Excursions into the vast Disko Bay – the size of Denmark, but with a population of just 800 – are very popular, too.

Closer to the doorstep of the hotel, guests can explore the town of Ilulissat, where they will find a picture-postcard image of charming, coloured wooden buildings, dog sledges parked in front, and shops selling local handicrafts. They will also find the Knud Rasmussen Museum, celebrating the life of the famous Danish explorer.

Food and drink are also a big priority at Hotel Arctic, and the board counts two prominent leaders who have helped to inspire new levels in catering. Mikkel Bjergsøe, the founder of the world-famous craft brewery Mikkeller, and Johannes Jensen, owner of the two-Michelin-starred Koks restaurant on the Faroe Islands, add a different dimension to the operations, and their expertise at board level is reflected in the menu and dining room. “Our restaurant, Brasserie ULO, is a high-level brasserie, comparable to the Danish steak restaurant group Mash,” Nielsen explains.

Next up is a fish restaurant, which is currently in development. “It will exclusively serve fish and seafood from Greenland.” And in partnership with Mikkeller, Hotel Arctic has brewed its own beer using herbs native to Greenland, and organised events for guests and locals to learn and enjoy more about the world of beer.

Looking ahead, Hotel Arctic is readying itself to start welcoming more guests in the next few years. The single airport in Greenland will be joined by two more in 2024 and 2025 – one in Nuuk, known as Godthåb in Danish, and another in Ilulissat. “It means that visitors from Europe will be able to fly directly to visit, with no stop-overs,” says Nielsen. “That will be big.” 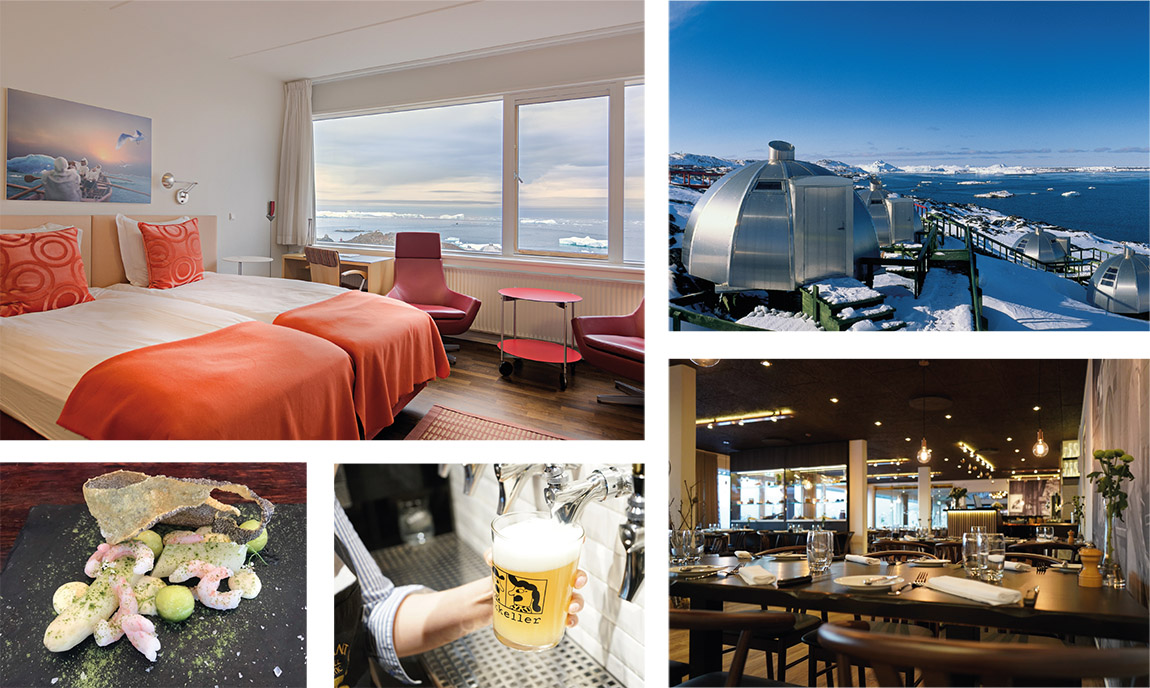