Boasting a resume of transformational projects, such as the noted Vulkan project in Oslo, architectural design firm LPO Arkitekter is re-shaping how we think about sustainable construction and preservation. Currently in the process of transforming and repurposing the landmark Oslo Lysverker building in Solli Plass into a neighborhood hotel, the firm is a leading star in the art of re-doing with purpose.

“It feels like a significant part of who we are as a firm,” says Lisbeth Halseth, head of administration and partner at LPO Arkitekter, an Oslo-based firm made up of more than 100 architects and advisors. “The identity we’ve grown into is one of connecting old and new in a seamless manner, bridging the sometimes challenging space of what must be preserved and what is served by renewal. With the experience we’ve built over the years, we feel a sense of belonging in this – there’s a great sense of purpose in being able to achieve two such different goals at once.”

Visualising a ‘town within a town’

Joined by CEO and partner Tom Sletner and communications director Hilde Lillejord, Halseth explains that the firm’s ethos and goals are reflected in its ever-developing and expanding portfolio. From the northern island of Svalbard to grand projects in the capital – including everything from museums and urban villages to airports and seafront apartment buildings – the firm boasts versatility, breadth and plenty of innovative spirit.

A notable example is the segment of the portfolio dedicated to Oslo’s revitalised riverside area of Vulkan – an area that was long a dormant industrial zone with little social utility or connection to the adjacent area of Grünerløkka. In revitalising the old brick constructions that formerly housed several factories, a ‘town within a town’ was facilitated, welcoming a popular food hall, several cafes, restaurants and concert halls, in addition to homes and office buildings. This new ecosystem of a city area has since boomed in popularity, won several awards and accolades, and become a must-visit district for tourists, a home to young locals, a fine-dining destination and more. “It’s a project we’re very proud of, and essentially, an expression of our identity,” says Sletner. “In combining innovation with respect for constructions that are already in place, we achieve an inclusive design process that is both solution-orientated, practical and aesthetical.”

LPO Arkitekter have worked closely with the city planning office and other design firms to get the project off the ground.

Sommerro – creating a social node for the modern era

Opening its doors in the spring of 2022 is the most recent testament to LPO’s vision of sustainable modernity. In redrawing and breathing new life into the 1930s building Oslo Lysverker, that once housed the capital’s electrical company, the firm is breaking new ground. Situated in the middle of Solli Plass in the western part of the city centre, the finished project will utilise the conservation-worthy building in a brand new way – offering Oslo’s first neighbourhood hotel. The hotel will be run by magnate Petter Stordalen’s Nordic Hotels & Resorts.

“The goal with the Sommerro project is to create a versatile spot for people to come together, making the most of the building’s original art deco interior, which really is part of Oslo’s design history,” says Halseth, adding that architectural elements and artworks in the building will be preserved. “Also, it’s exciting to be working closely with city planning and design firms to make this happen. The city’s cultural heritage management has provided constructive information and guided us well, and designers GrecoDeco are great to work with. It’s a monumental cooperation, preserving this magnificent piece of local history and transforming such a revered building – making sure it fits in with modern times without losing its uniqueness. It means a lot to us as a firm, and the cityscape.”

The hotel will have 252 rooms and suites, as well as bars and restaurants, including a circle-shaped, two-floor rooftop restaurant with the best views of Oslo city. The adjacent Vestkantbadet spa will also be renovated and made available for not only hotel guests, but other visitors, as before. Additionally, the hotel will have a rooftop swimming pool – as Oslo’s only hotel with this kind of offering. It’s a first step in a total redesign of the area, which will include parks, green spaces, and several smaller squares. “Opening up the area to invite life, activity and pulse is a step with the times,” says Halseth. “We’re excited to see the finished results.” 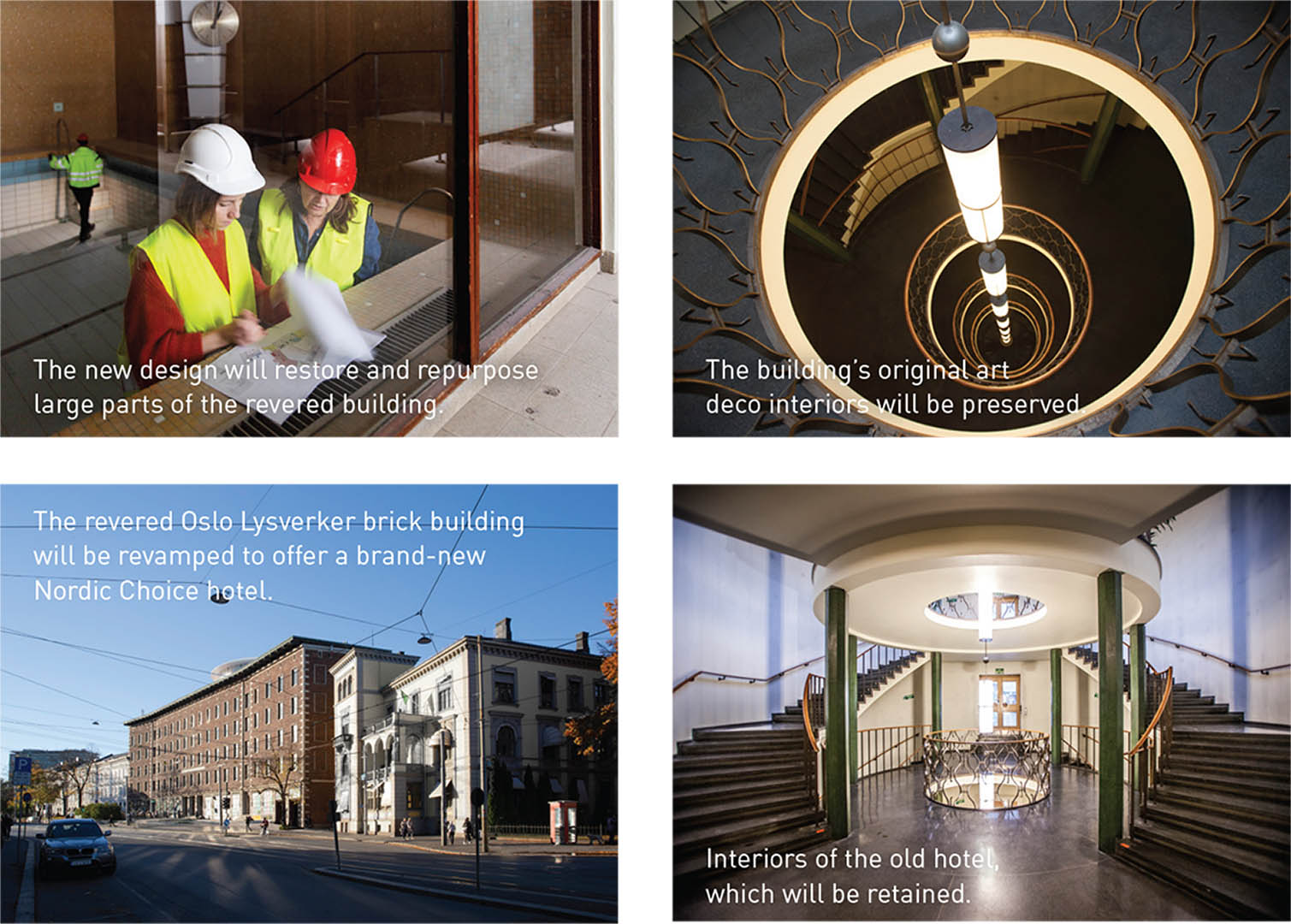