“A good architect designs a building in interaction with its specific surroundings and the people who will live there,” says Jesper Korf, co-owner of N+P ARKITEKTUR, nominated for Denmark’s Architecture Award. “You have to take some kind of stance in relation to the building’s location, otherwise you fail. The building can emphasise its surroundings or it can juxtapose its surroundings, but you can’t fall in between. If you do, you will get a dull building.”

The three architects at N+P ARKITEKTUR like a challenge, whether it comes in the shape of a villa or a block of student flats. “The projects may be very different from one another, but they all have in common that these buildings need to have a positive impact on the people who’ll live there. We’re very good at figuring out the way people will live in what we build, I think, and accommodating that,” says co-owner Lars Bo Poulsen, who founded N+P ARKITEKTUR back in 2005 together with the final co-owner and architect, Thomas Nørkær.

“Each project is different, and they all express something unique. Being an architect is fun. We get to meet and work with very exciting people, who trust us to create something for them that’s even better than they expected. That relationship is really the reason why people make use of architects instead of just moving into a cookie-cutter house,” Poulsen continues. “We gain a lot by getting to know our clients really well too: architecture can’t be done in a vacuum. Each house, flat or commercial building gains a lot of personality and character through the people who’ll live there.”

The three architects often work on the projects in pairs. “Two architect brains are better than one, and it’s great to get to bounce ideas off one-another,” Poulsen explains. In addition to taking care of the practical and technical sides of the build, architects become master mediators going between the council, the builders and the client to make the construction phase as smooth as possible. “We know how to prepare a project and how to present it to get the permissions needed; in fact, the better prepared a project is, the more you can convince the authorities to permit you to do. A lot of people need a little push to try something new, and the authorities are certainly no exception,” Korf adds. “We have to take a stance to create buildings that stand out.”

Alongside getting to know the clients, the N+P architects spend a lot of time getting to know the site of the build at the beginning of the process and making sure that their ideas work with the surroundings during the construction phase. Buildings in cities must work in conjunction with other buildings and sights in the proximity, as well as with people who won’t use the building’s interior, but will interact with its exterior. In the countryside, beside the client, nature becomes the architects’ biggest sparring partner. “Buildings should always make time for their surroundings in some way. If the house is just there, that’s a missed opportunity. How does it comment on its surroundings and make us aware of them?”

In Østerbye, a thoroughly modern family villa built with traditional materials pays its respects to the forest around it. Its natural wooden facade is reflected inside the house, where wooden floors and ceilings add warmth and character to the large, bright rooms. The warm wooden staircase is enclosed within a cooler cement wall, echoing the colours of the trees outside during the colder parts of the year.

At the Frame House in Hjørring, N+P ARKITEKTUR’s design comments on the location in a very different way. The sharp, long, one-floor house lies in stark contrast to the soft, cascading hill below it. Despite the size of the house, it is dwarfed by the conifers to either side of it. The house stands out, but it doesn’t take anything away from the nature surrounding it – on the contrary, it makes one notice the softness of the grass and the height of the trees. Inside the house, its inhabitants are encouraged to do so thanks to panoramic views from almost all the rooms.

“One thing is the look of the house, in its surroundings, on the outside,” Poulsen says. “It’s just as important to consider what we can do with the location from the inside. Great architecture can even add to a beautiful location by framing it and making us look at it differently – that’s what we did at Petry Retreat, a summerhouse in northern Jutland with a gorgeous view of the North Sea.”

He ends: “No one involves an architect to get a house that someone else has already made – and it wouldn’t be fun for us if we had to do the same thing over and over again, either. We’re humans, and we have to evolve – if we don’t evolve, we go backwards. It’s our job to push our clients a little, so that they get everything they want from their building, and then a little bit more.” 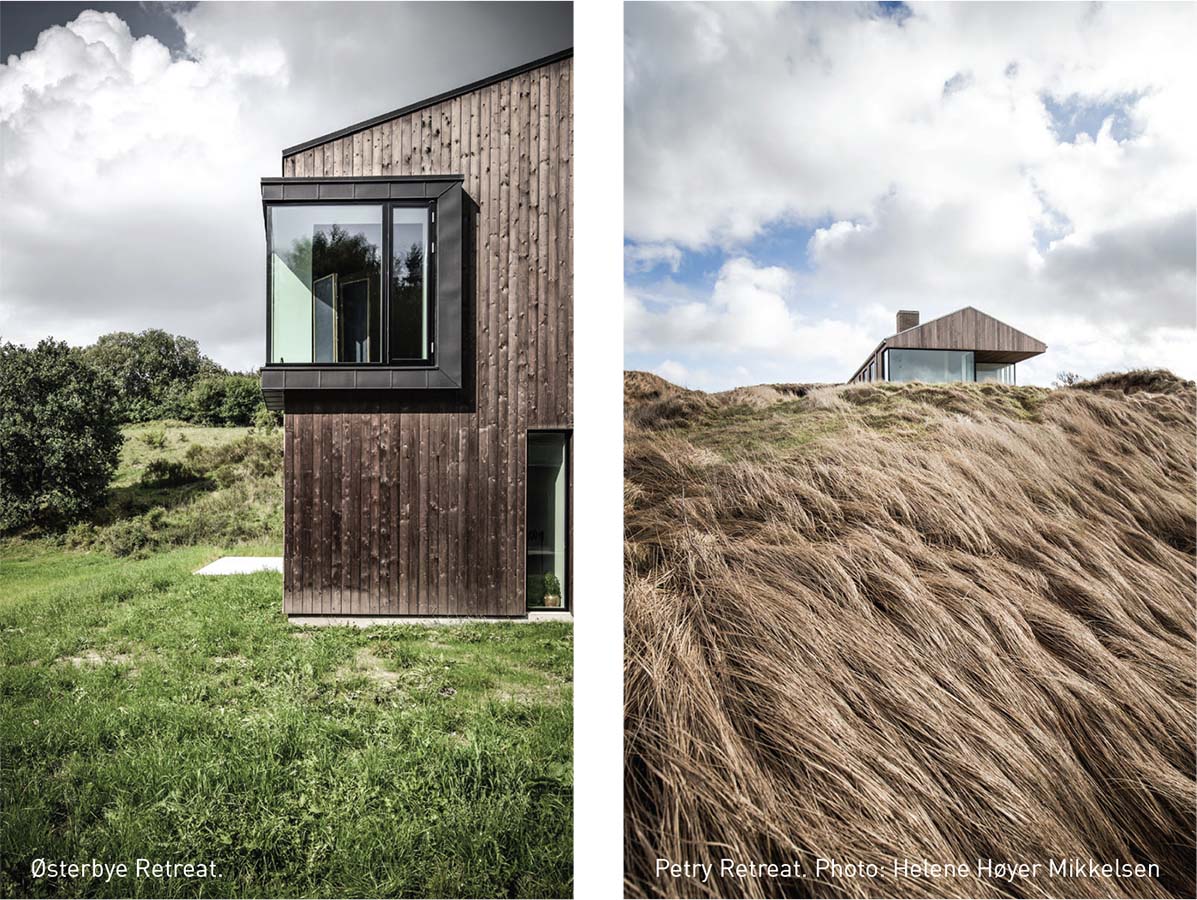 www.nplusp.dk Read the feature on issuu