Iceland claims one of the most geologically dynamic regions on earth: the Katla Geopark, home to five volcanos, all covered by towering glaciers. But it isn’t just volcanos that make this place an extreme geological experience: with an area of 9,542 square kilometres, almost ten per cent of Iceland, it boasts beautiful landscapes, black sandy beaches, waterfalls flowing over high cliffs, glacial rivers, caves and canyons, moss-covered lava fields, and a wealth of wildlife.

This is a truly amazing place, and Berglind Sigmundsdóttir, manager at Katla Geopark, is keen to note that the heritage, traditions, and stories told by the residents of the Geopark are heavily influenced by the geo-hazards of the surrounding landscape.

The danger of the sneaker waves

While volcanic activity might dominate the Geopark’s history, the sneaker waves on the black beaches are like something out of a fantasy novel. Visitors excited by the extreme surroundings, and perhaps in search of a thrill, can get too close to the water’s edge.

Being caught by a sneaker is described by Berglind as “being hit by a wall of water. These sneaker waves come suddenly and without warning, are disproportionally large compared to the previous waves, and lash out with an immense amount of force, sweeping you off your feet and often carrying you out to sea.” An important warning for anyone visiting these black beaches.

The eruption of a volcano that’s covered by a glacier has different consequences to the eruption of those that are not. As the lava and ice come into contact, it causes a reaction that produces an abundance of ash, and as the glacier melts there is a high risk of powerful outbursts of glacial floods, which are frequently catastrophic.

Katla, which usually erupts every 40 to 80 years, last erupted in 1918. It is expected that this, the biggest of these five volcanos, will erupt again at any time. As Berglind says, “it isn’t a matter of if, it is a matter of when”. For this reason, the residents of Vik, the town closest to Katla, are required to have a bag packed, ready for an emergency evacuation. The saying among the residents is that “Katla is coming” and they are as ready as they can be.

Despite the dangers the residents live with, there is a love and deeply held respect for the Geopark. Berglind’s heartfelt pride for the local stakeholders and residents is clear as she talks about their contributions and collaborations. Together, they have created a code of conduct to help preserve the ecological balance in the park. Education at all age levels, including in schools, is an important aspect of the collaboration to develop a greater understanding and appreciation locally while promoting responsible behaviour.

The greater awareness there is, the more local stakeholders would like to keep their nature as pure as possible. Guided tours to areas hard to reach are widely available and keep visitors safe from the unsuspected dangers and the elements. Sites for tourism are mainly kept close to roads and infrastructures, while sustainable tourism is promoted through travel companies.

The residents are looked upon as partners in the Geopark and are key players in its sustainable development. Their role in helping to promote local heritage, through storytelling, selling local produce in shops and including it on menus, while also creating goods from regionally sourced materials, supports the local economy.

“It’s a close-knit community of people, all working together to preserve nature and their geological and cultural heritage,” says Berglind.

During the last Katla eruption in 1918, a group of farmers had a narrow escape when they were herding their sheep to safety. One of these farmers was the granddad of the owner of the Icelandic Lava Show.

The idea of the show was born after visiting the 2010 eruption of Eyjafjallajökull. The owners decided to create a show where people can experience real lava up close, but without the inherent dangers of seeking the same experience by climbing a volcano. Storytelling of what happened when Katla last erupted, as well as information about safety, monitoring and the plans in Vik for when another eruption happens, keep tourists informed and can hopefully help to avoid chaos during the next major volcanic event.

This enterprise received the Innovation Award of Icelandic Tourism in 2021, and the owners are going on to open a similar venue in Reykjavik.

When asked about her favourite place in the Geopark, Berglind says: “Standing on the beach admiring the vast landscape, from seemingly endless coastline to the towering glaciers and volcanos above, feeling like one tiny grain of sand in this huge nature, being part of this dynamic landscape, where the powers of natural forces are constantly changing the environment.”

It’s a fitting description of one of the most dynamic places on the planet. 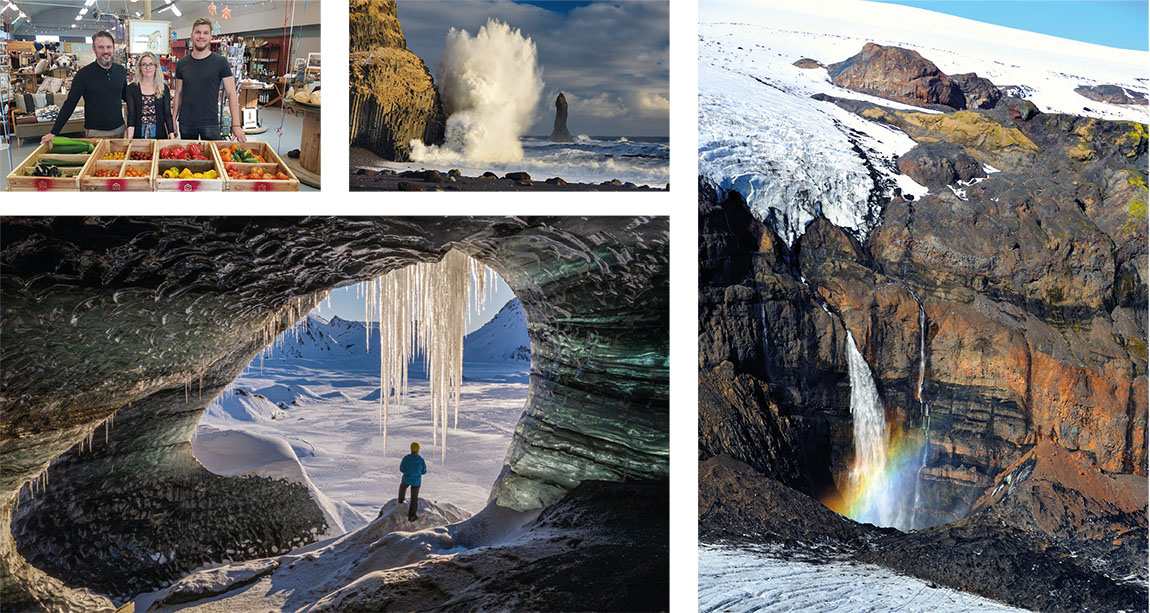 Thorupstrand Fiskehus: Barefoot in the surf with fish ’n’ chips and live music