The Nobel Prize Museum: Ever dreamt of being a guest at the Nobel Banquet?

Have you ever dreamt of rubbing shoulders with Nobel Prize laureates and experiencing the banquet first hand? A visit to the Nobel Prize Museum is the next best thing. The exhibition The Nobel Prize banquet – behind the scenes, will put you right at the heart of the event.

As one of Stockholm’s main tourist attractions, the new exhibition at the Nobel Prize Museum allows you to taste, feel and hear what it’s like to be a VIP at one of Scandinavia’s most cherished events. “We had the idea for an exhibition based on the Nobel Prize banquet for several years,” says museum director Erika Lanner. “As soon as we found the right angle, we got the ball rolling.”

The banquet has been televised in Sweden since the 1960s and has since become a true cultural phenomenon. “Swedes have taken it to heart,” adds Lanner. “We celebrate it at home, in schools, elderly homes – all over the place.”

Why not have a bite to eat in the bistro during your visit? Book a luxurious Nobel lunch alongside a glass of Champagne for the ultimate experience. Pick up a souvenir at the shop, or try your hand at flower binding with the best in the business.

“We have fantastic chefs in our bistro,” continues Lanner. “Order something from one of the previous year’s menus from the banquet, and combine it with a tour of the exhibition.”

What would a banquet be without fashion? Some of the most memorable creations are on display: Crown Princess Victoria of Sweden made a statement for recycling in 2018, when she wore a dress also worn by her mother, the Queen of Sweden, several years earlier, in 1995.

“We have highlighted a few creations with specific statements,” Lanners says. “Former Minister of Culture in Sweden, Alice Bah Kuhnke, wore a dress with folded paper, drawing attention to the warming of the Arctic ice caps. It really made an impression.”

What’s more, renowned photographer Anders Petersen shares a variety of his work at the exhibition too. “A more artistic perspective – one you don’t see that often,” says Lanner. “He was granted access to move freely at the banquet, something that press photographers aren’t allowed to do.”

There really is something for everyone here, be it fashion, the history of the event, or the culinary delights through the years. If your destination is Stockholm, be sure to pay a visit to the Nobel Prize Museum and the exhibition The Nobel Prize banquet – behind the scenes. 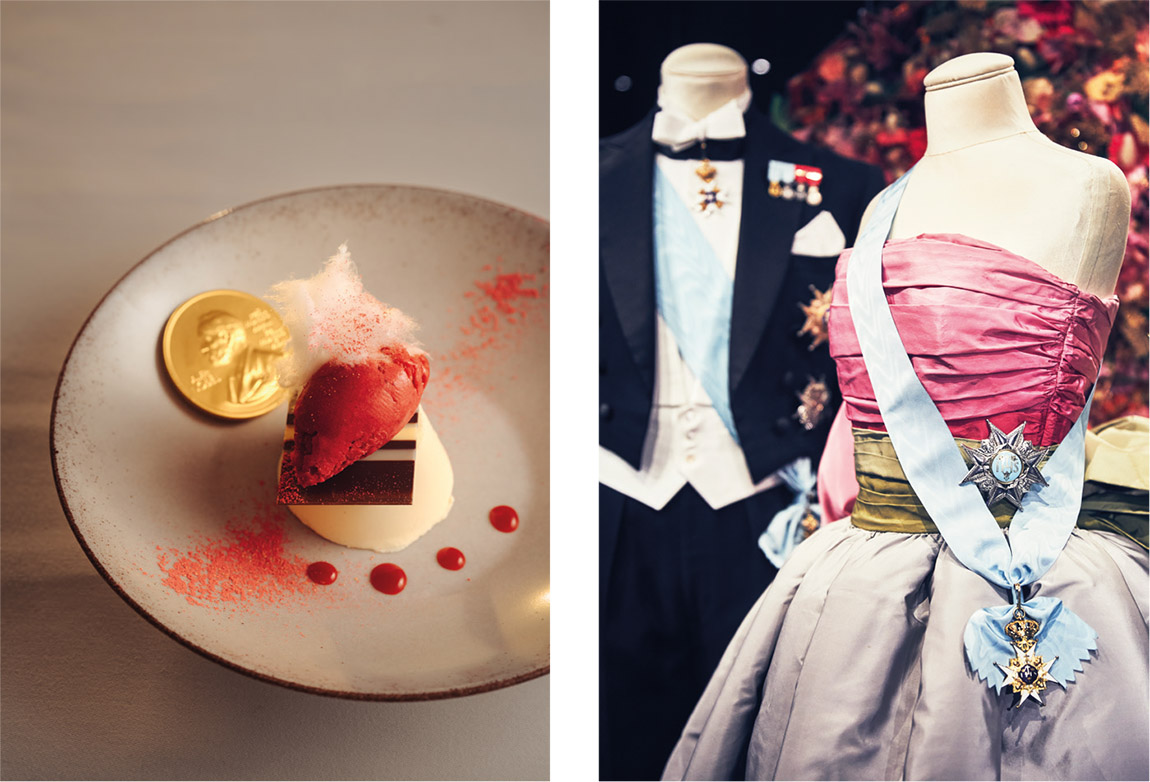 Left: Try a dessert from a previous year’s menu. How about a red whiskey dessert with a gold medallion? Right: The tailcoat worn by King Carl XVI Gustaf and the gown worn by Queen Silvia in 1995, and by the Crown Princess Victoria in 2018. Photo: Dan Lepp.