Tirsbæk Gods: A historic house for the present

Since 1540, Tirsbæk Gods (Tirsbæk Manor House) has featured in the landscape close to Vejle Fjord in western Denmark. It has been added to and taken from and changed hands over the last 500 years to today being a family home, a farm, an events space and a place where people can enjoy either the thrills of driving off-road or a peaceful stroll through a Renaissance garden.

Tirsbæk was first mentioned in the 1300s, but the main building that still stands today was built in the 1540s, and the wings and tower were added at a later stage. “The house is built on an islet, which meant that it was self-sufficient in case there were any uprisings at the time,” explains Hans Henrik Algreen-Ussing, owner of Tirsbæk Gods.

“Niels Linde owned the house in the early 1700s and was well-travelled and inspired by what he saw, and he decided that there had to be a Renaissance garden at the house. The garden was finished in 1745, and some of the plants that Niels picked up from his travels can still be seen in the garden today. There’s a London plane tree that’s over 300 years old, which was most likely brought back by Niels,” says Algreen-Ussing.

A nail to the head

Niels Linde’s son was not quite as good at keeping the house and ended up marrying the maid, Maren Loss, which at the time was not the done thing. “They had a couple of years together before Maren ended up falling in love with the bailiff and had to dispose of Niels. She stabbed his forehead while he was sleeping, practically performing a frontal lobectomy, making him zombie-like. After a week, he died from the infection of the wounds, and after mourning for a year, Maren married her lover,” says Algreen-Ussing. “They had to donate all the inventory to the local church to stop a local scandal from occurring, but she ended up with the person she loved.”

Between 1780 and 1910 there were upwards of a dozen owners of Tirsbæk, who all put their own mark on the house, and in 1910, Algreen-Ussing’s great-grandfather, Hans Niels Andersen, bought the estate. It has been in the family ever since. In 1995, Hans Henrik took over the running of the estate, which today includes farming, forestry, rented houses and offices, and plenty of experiences for visitors. 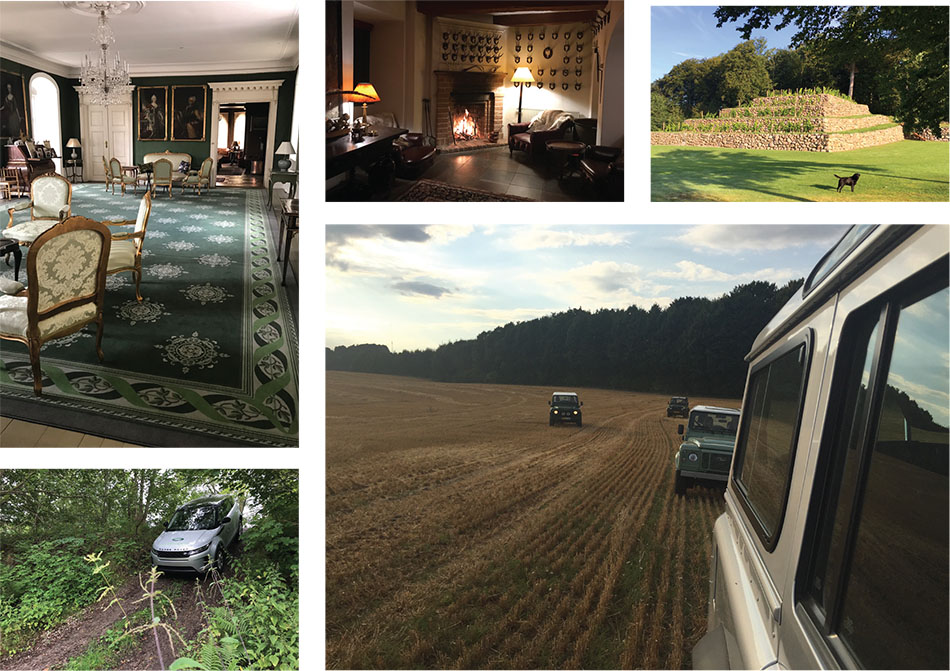 Whether it is strolling through the beautiful Renaissance garden or enjoying the popular Christmas market that has been going for 24 years, there is plenty to experience at Tirsbæk Gods. “Throughout the year, we host private and business events both in the house and in the garden. We don’t live in the main house, which means it is free to use for meetings, conferences and exhibitions,” says Algreen-Ussing. Many of the buildings are also used for office spaces or rented out to private people as permanent homes.

The garden, which is open to visitors from April to September, can also be used for a variety of events and was completely revamped in 2007, after the RealDania fund supported the restoration of the garden as it wanted to ensure that the manor garden was maintained for the future. In the category Europe’s Heritage of Gardens and Gardening, the garden won second prize in 2018/2019. The grounds also make the setting for a yearly concert where the Royal Life Guard’s Musical Corps play.

For those looking for a thrill-seeking experience, it is possible to try off-road driving in a Land Rover. The centre is one of only 39 certified Land Rover Experience Centres globally, which were set up for people to try what a Land Rover can do when it no longer has tarmac under the tyres. The experience can be booked both for private persons and for business and team-building events.

Apart from Hans Henrik and his wife Marianne, who is a doctor, there are only two permanent staff at Tirsbæk Gods. “This is a lifestyle; it’s not a job. It’s 24 hours a day and 365 days a year, and I love it,” exclaims Algreen-Ussing, who grew up with his parents running the place.

“There are plenty of long- and short-term things to be excited about. We’ll likely increase our wine production and have a small farm shop, where people can find local products, and we’ll continue to increase our events and delight the over 100,000 visitors we have every year. There’ll also be the generational change, although I’ve got plenty more years to go, and it’ll be exciting to see how the future of Tirsbæk changes with someone new in charge. We’re adding to the history of the place and will continue to enjoy finding ways in which not only we, but also other people, can experience this fantastic place,” concludes Algreen-Ussing.