Utopia: Saving the world one building at time

Utopia wants to do things differently, and they are not afraid to take a stand. The Stockholm-based architecture office is at the forefront of the innovative thinking that is much needed in the industry, according to CEO Emma Jonsteg.

Architects are traditionally brought in as doers relatively late in the process, but Utopia works proactively as advisors from an early stage. “We contribute visions as well as overall solutions and strategies on how to create greater value at a place and for a company, the residents and the public,” says Jonsteg.

She explains that they spend a great deal of time coming up with the idea behind this and the process takes its starting point in site-specific challenges.

Standing up for change

Being proactive and site-specific was not the only clear vision when Jonsteg and her colleague Mattias Litström founded Utopia in 2008. They also wanted to give something back to society.

“Working as an architect means that you, every now and then, get the opportunity to play an active part in creating a somewhat better society. Utopia was started with the simple aim of maximising the number of such opportunities,” Jonsteg says.

Creating a better society can also involve taking a stand in global issues, and Utopia was recently the initiator of a campaign in the industry raising funds to help refugees. They started by contributing 50,000 SEK and added another 1,000 SEK for every other architecture firm following in their footsteps.

Left: Sharing a flat with friends is both fun and budget friendly. | Right: Utopia’s Kombo concept was designed for friends who want to live together.

Pioneering in the industry

Jonsteg herself is not only the CEO at Utopia, but also a board member of the Swedish Association of Architects (Sveriges Arkitekter), the co-host of a building trade podcast, and a frequent debater and writer. So where did it all start for her?

“I’m rather stubborn and ambitious with a great commitment to society, and to me it’s a lot about growing and learning new things,” she says. “I became an architect because I think architects have a capacity to see the overall picture and come up with new solutions that are not always the most obvious. We need more innovation in the industry.”

Not getting stuck in a rut is important and Jonsteg explains that rules and regulations are not always able to keep up with modern needs. In 2014, Fastighetsägarna Stockholm, NCC and Swedbank picked up on this when they asked young people how they want to live in the future. “A survey showed that 47 per cent of Stockholmians between 18 and 35 want to live with friends. But only three per cent did,” explains Jonsteg.

Utopia’s Kombo concept is tailored for flatsharing and aimed at friends who want to live together. This is a cost-effective, sustainable and social way of living and a creative solution to tackling the housing shortage in Stockholm. Proposals have so far been made for Sundbyberg and Stadshagen.

Left: Emma Jonsteg and Mattias Litström founded Utopia in 2008. | Right: The project Trasmattan took on the challenge to create a quiet and peaceful living environment, despite noise from nearby traffic.

Creating a public park on the roof

A typical Utopia project is characterised by a site-specific approach, adding something extra to the mix. The location and site always make the starting point and the goal is to create value beyond the building itself. “It’s not just a house with a number of flats; we want to add something,” says the CEO.

Utopia came up with an idea to incorporate an existing park in a new building project commissioned by Viedekke Bostad for the neighbourhood of Södermalm. The idea turned into a proposal of 17 terraced houses and 12 flats along Hornsbruksgatan at the south end of the park Högalidsparken.

“We had the park continue out on the roof to create a public space,” Jonsteg says and explains that the idea was to create a close connection between the park behind the buildings and the street in front by adding an extension. 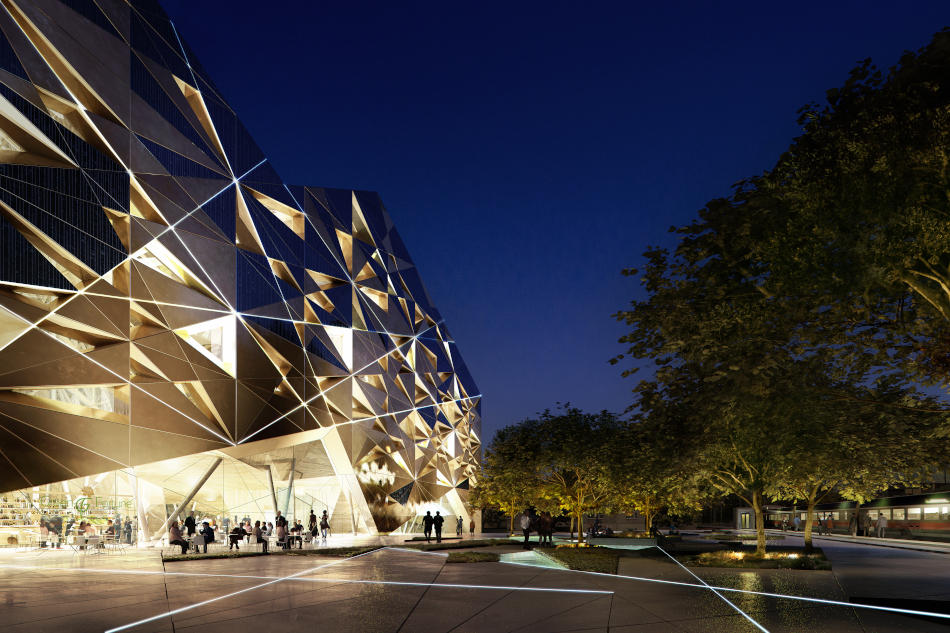 Juvelen in Uppsala will be the most sustainable office building in the Nordic countries.

Site-specific conditions set a whole different tone in the suburb of Midsommarkransen in southern Stockholm. The proposed design for Trasmattan – a colourful 270-metre tall building – helps to block out noise from nearby traffic.

“It’s an example of how a quiet environment creates great value. All flats have a connection to the quiet courtyard and that’s the reason the building looks the way it does,” explains Jonsteg, “and due to noise-cancelling measures the entire building has to be consistent with the same height all over.” The challenge of making a building interesting without variations in height turned into a creative rag rug-inspired design featuring various colours and angles, hence the name ‘Trasmattan’ (Swedish for rag rug).

“We try to have a humble approach,” says Jonsteg. “What we do affects people to a very large extent, which makes it our duty to contribute to the comfort and wellbeing of everyone living in our buildings.”