Whale2Sea is located in the Arctic town of Andenes, at the northernmost peak of the island of Andøya. Known for its dramatic nature, deep fjords and the Norwegian Sea on its doorstep, Andøya is the ideal destination for anyone interested in Arctic nature experiences and studies. Whale2Sea offers all this and much more.

With extensive experience within whale watching and collaborations with local researchers, Whale2Sea encounters whales on an estimated 98 per cent of their trips. Whale2Sea brings their guests out on RIB (rigid inflatable boat) vessels, allowing for closer encounters with the whales with less impact on the animals and their territories. The RIBs also give Whale2Sea the opportunity to cover larger areas in a much shorter time, increasing the chance of finding the whales. Travelling by RIB even reduces the chance of seasickness, making the trip much more pleasant and relaxing.

Sperm whales are the whales most commonly spotted on trips. However, managing director Marten Bril says that the number of species visiting the area has increased in the past couple of years: “During the summer season, we’re now also getting orcas, fin whales, humpback whales and several species of dolphins,” Bril says. “Seeing these large groups of whales is an amazing experience.” 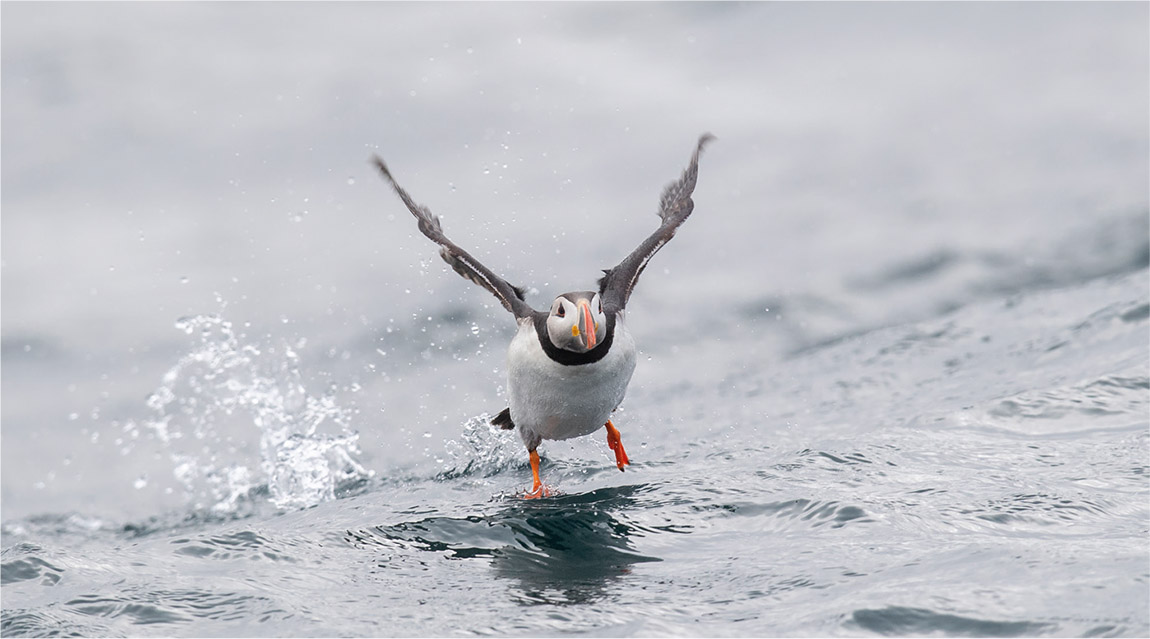 Not only do you get the chance to see the whales up close: in the winter, Whale2Sea also offers the opportunity of snorkelling with orcas. This takes place further north, in Skjervøy, north of Tromsø, and Whale2Sea provides all the necessary equipment. It’s all done respectfully, following Whale2Sea’s code of conduct to not disturb the whales and their surroundings.

But there is more to the Andenes area. It is also home to birds like white-tailed eagles, gannets and puffins. Whale2Sea offers bird safari trips, taking you on a tour of the archipelago with its variety of Arctic bird species. The trips depart daily from May through to August, with stops by Bleiksøy, one of the most famous bird colonies in Norway, with its 735,000 pairs of puffins, auks and guillemots, as well as the island of Forøy, with its colony of nesting gannets, seagulls and cormorants. You might even get to see harbour seals, harbour porpoises, otters or minks during the trip. For an extra spectacular experience, Whale2Sea also offers midnight bird and whale watching, starting at 9pm.

The winter also allows for magical nightly sights and photography opportunities. Andøya is situated right underneath the northern lights oval, the area where the aurora borealis is visible. Between the end of November and mid-January, the sun never rises above the horizon, meaning that the chances of experiencing the auroras are very high. This, in addition to the lack of light pollution from larger cities, allows for amazingly vivid northern lights experiences. This far north, the auroras are visible from the end of August until the beginning of April, and Whale2Sea offers northern lights and wildlife photography workshops at Sea Safari Brygga in Andenes.

Whale2Sea also wants to contribute to the understanding of male sperm whales. Recently, they launched a two-year research project funded by the Regional Research Council Nordland in collaboration with Tromsø University and Marine Ecological Research Ltd UK. The project aims to study whale ecology, their travel routes, habitat use, diets, improved methods for acoustic detection of sperm whales, acoustic behaviour of sperm whales, and depredation behavior, as well as to determine the age structure of male sperm whales.

The researchers are studying the whales’ languages and dialects and working on photo identification of their tails, which are all unique to the individual whale. This allows for the observation of individuals over time. “We want to know where they come from, when they arrive, where they travel to next and who they are,” Bril says. “When they arrive, we register them as well as the time of arrival, allowing us to get a clearer idea of their travel habits and routes over time.”

So far, research has revealed that the whales travel across extensive distances, from Svalbard in the north to Argentina in the south. And when they visit the seas of Andenes, Whale2Sea are ready to take the RIBs out to sea, to give their guests a once-in-a-lifetime experience.