Experience the heart of the Norwegian winter at Mesna

Weaving together Norwegian history, a uniquely captivating story, horseback riding and a novel approach to film location tourism, Mesna offers a truly unique experience. Add unbeatable scenery, warm hospitality and close proximity to the Olympic town of Lillehammer, and your active Mesna experience is fit for the big screen.

It was after the Norwegian blockbuster Birkebeinerne (The Last King) in 2015 that the area rose to cinematic fame. Filmed around Mesna Farm on the shores of South Mesna Lake, a mere 25-minute drive from the Olympic town of Lillehammer, the historic storyline was brought to life by the stunning natural scenery as well as the star performance of Mesna’s herd of Icelandic horses. The story of the 12th- and 13th-century Birkebeiner rebels was cinematically woven into the local landscapes, and film locations have become an important part of what Mesna has to offer. Since then, numerous TV series, comedies like the acclaimed Lillyhammer Netflix series, and promotional films have been shot in the area and on the farm.

The story of the Birkebeiners – a wintery drama

From that first connection to the Birkebeinerne film, Mesna has now developed another show. This unique piece of local theatre – the Birkebeinerspelet outdoor play – is set in the middle of the snowy winter fields. Camilla Li and Kristoffer Hauger, owners of Mesna Farm, had acquired some of the sets from the movie, and drawing inspiration from the Norwegian tradition of staging historical plays outside, like the outdoor production of Henrik Ibsen’s Peer Gynt at Gålå, the couple decided to make theirs a winter play. And what better story to start with than that of the Birkebeiners, which retells one of most dramatic events of Norwegian history? 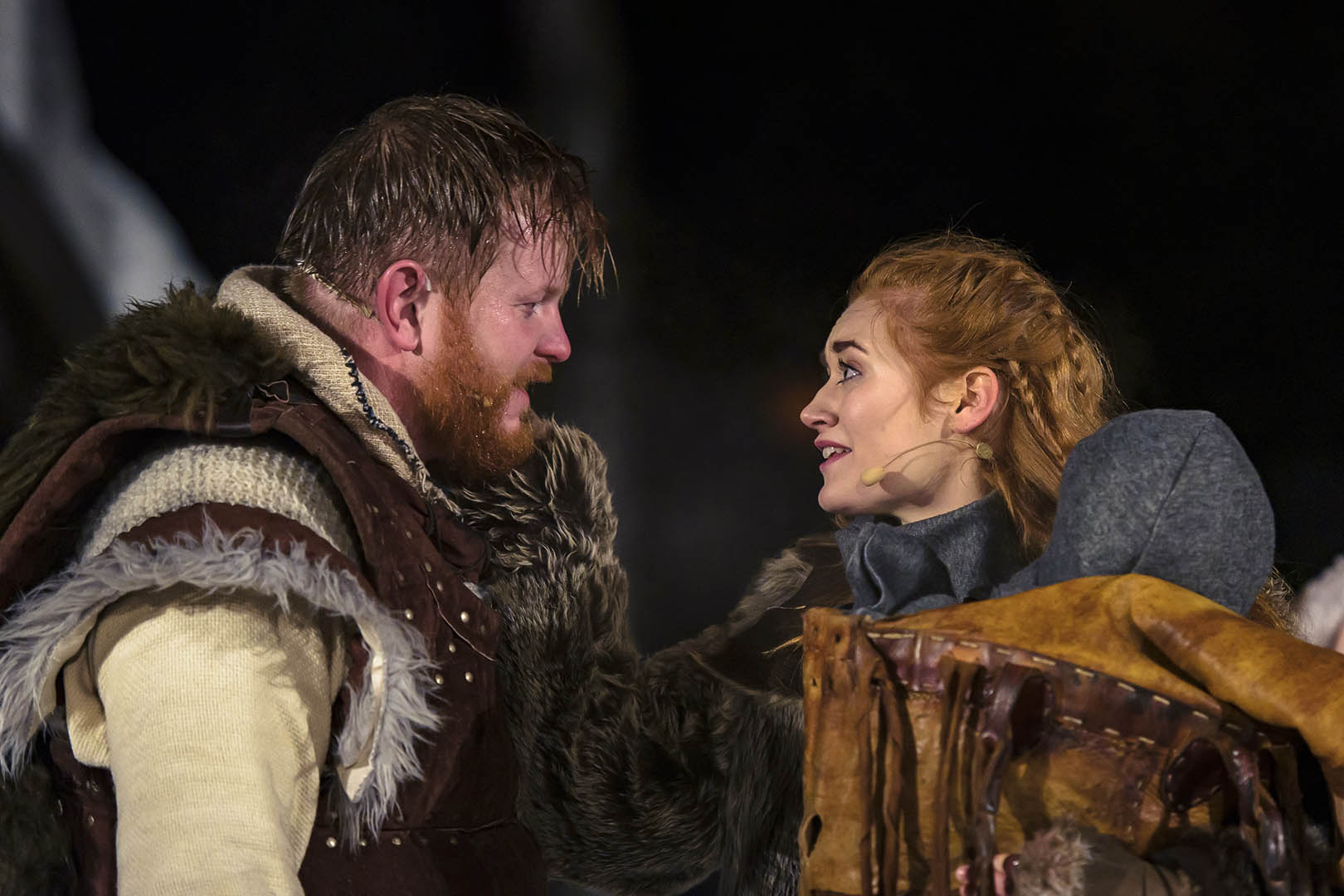 The play is set at the end of the Viking era, when Norway was ravaged by a civil war. One side, the poorer Birkebeiners, were based in the province of Trøndelag. Their opponents, the Catholic Baglers, came from the Oslo area and further south, supported by the church and ultimately the pope in Rome. For either side, power depended on succession to the throne, and both sides had royal claims. When King Håkon Sverresson, leader of the Birkebeiners, died without an heir, the Baglers saw an opportunity for greater power. But King Håkon had fathered an illegitimate son by his mistress Inga from Varteig, and the baby boy, also called Håkon, was now a threat to the Baglers’ ambitions. 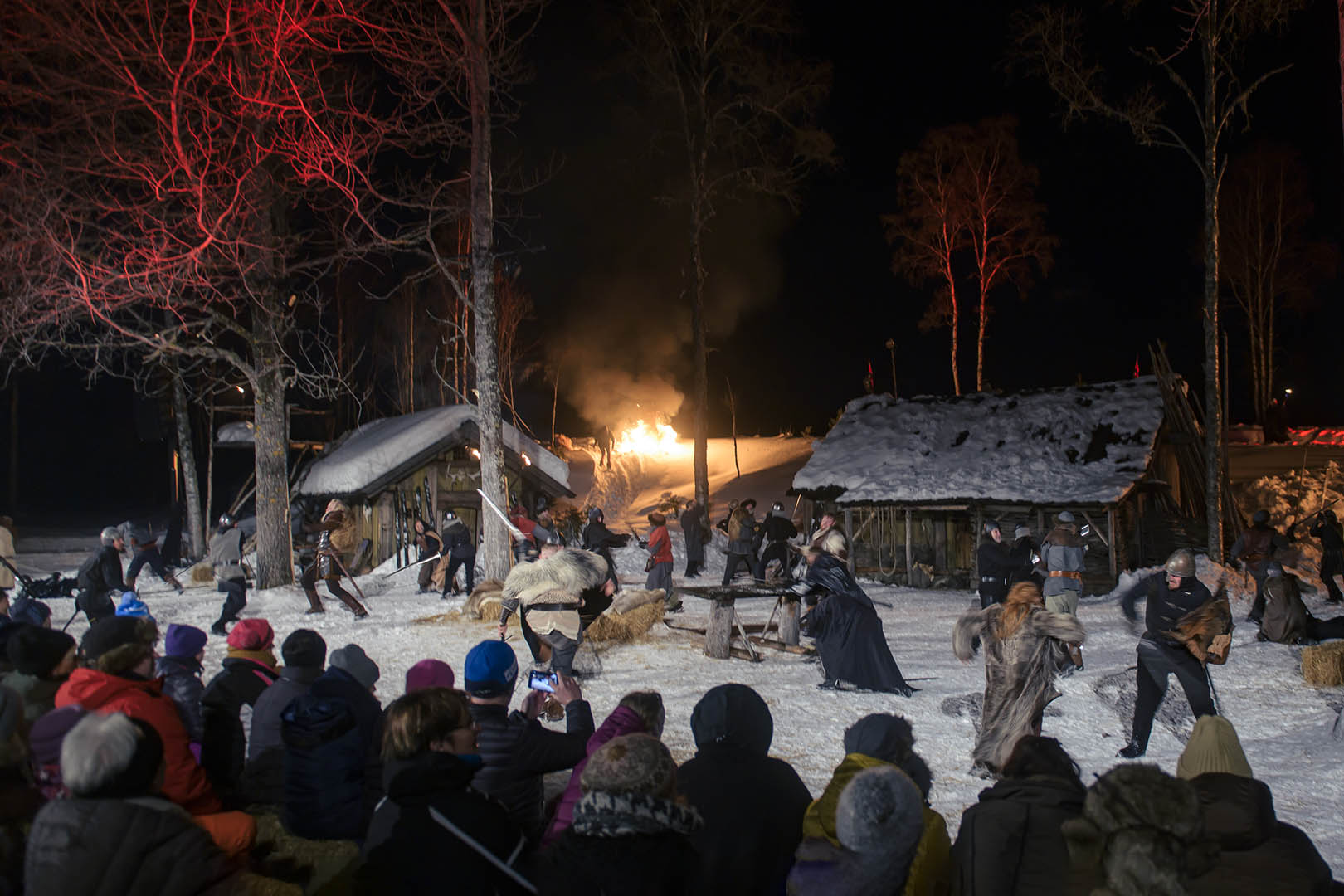 Wrap up in a warm blanket and let the story of the Birkebeiners fill you with excitement and wonder.

What followed was an excruciating race to save baby Håkon before the Baglers could kill him. The flight over the mountains to safety in Trøndelag was a dangerous 60-kilometre trek, fit only for two of the very best Birkebeiner warriors. They made it, and 11 years later – in 1217 – the 12-year-old Håkon Håkonsson could claim the Norwegian throne. He would go on to rule over a unified Norway for almost 60 years, changing the course of Norwegian history.

The Birkebeinerspelet play brings to life the central event: the flight across the mountain and the escape from the pursuing Baglers. During a 60-minute live action show, told in true Viking style in the wintery landscape, the play features famous Norwegian actors as well as local talent. In dramatic fight scenes, with fire displays, real snow and Icelandic horses galloping across the snowy stage, the play is made all the more dramatic by the lakeside location, in the area where these historical events actually took place. 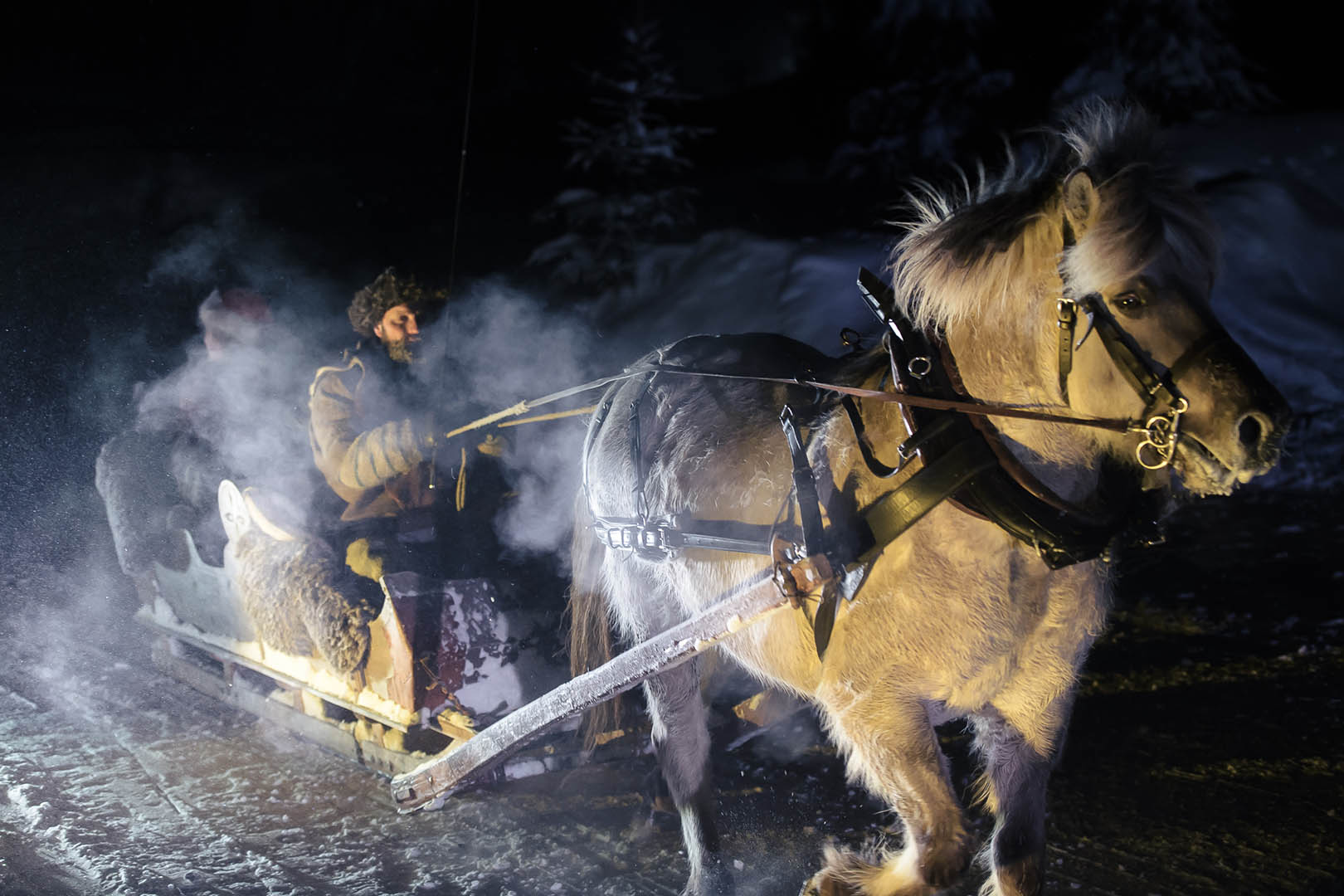 The wintery setting of the play adds to the traditional, Norwegian feel.

The audience is brought into the middle of the action in a truly immersive experience that starts up at the farm with a medieval-style market, offering a grand array of local foods, refreshments, crafts and souvenirs. As the play begins, you may follow the actors and the action on a torch-lit walk down to the amphitheatre and the stage – all made from snow. There, you are seated on haybales under the stars, wrapped up in your warm winter clothes. You are then transported back to another age – the darkness, the fresh, cold night air, and the fiery drama on stage altogether heightening this genuine Norwegian experience. 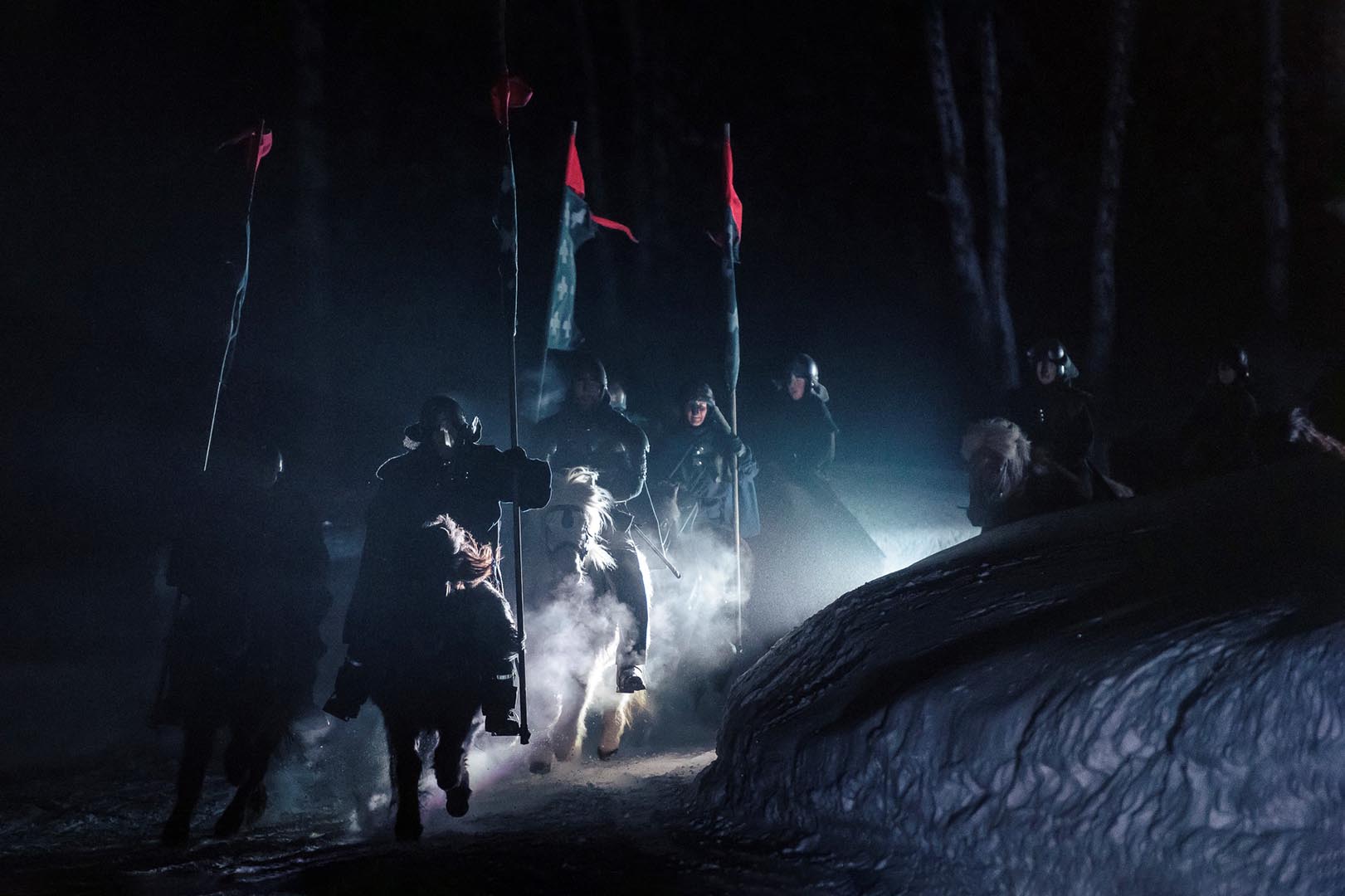 The play is offered in Norwegian, with a summary in English provided separately. However, the story’s thrilling action and breathtaking scenes hit home with each spectator – regardless of language. Presenting universal themes of loyalty and love, Birkebeinerspelet presents an immediately accessible piece of theatre that will enthral everyone. 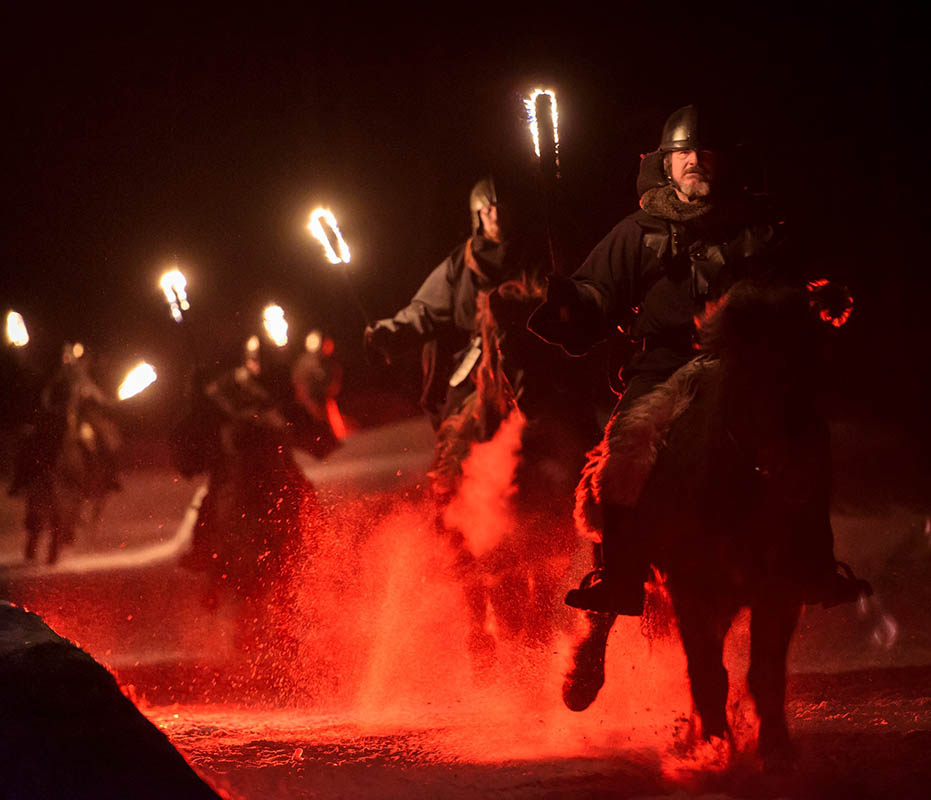 Mesna and beyond – events, Olympics, and skiing

Beyond offering an acclaimed outdoor theatre production, Camilla and Kristoffer also accommodate company events, family gatherings, weddings and conferences through Mesna Activities and Accommodation. State-of-the-art facilities for conferences and team-building events are available, and the picturesque barn is the perfect setting for weddings and other private celebrations.

With a herd of around 60 Icelandic horses at the farm, you may also choose to combine your stay at Mesna with a unique horseback experience – taking in the gorgeous views on a horseback trek tailored to your group’s desires and abilities. Riding camps and private lessons are also available, where those interested in the magnificent Icelandic breed can benefit from Camilla and Kristoffer’s more than 40 years of riding experience. Accommodation is offered only a stone’s throw from the farm, at Mesnabakken, a restored pension where visitors can relax in peaceful and comfortable surroundings after a day of adventures. 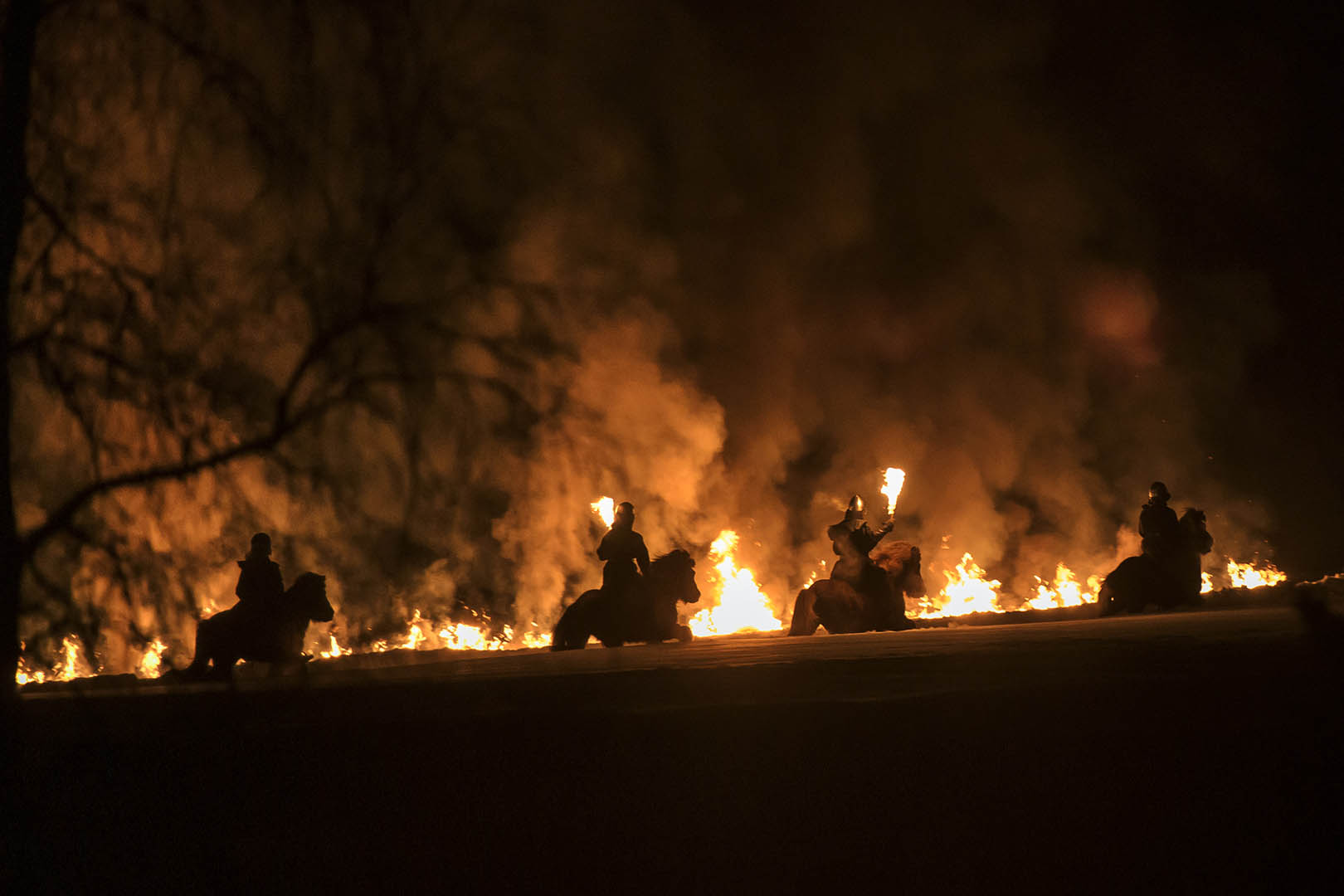 Wrap up in a warm blanket and let the story of the Birkebeiners fill you with excitement and wonder.

Further accommodation is available within the Ringsaker area. The Clarion Collection Hotel Hammer in Lillehammer offers a special Birkebeinerspel package that includes transportation to Mesna and tickets to the play. The popular ski resort Hafjell Resort is located a mere 40 minutes away, also offering a cosy place to stay. The close proximity to Lillehammer and surrounding skiing areas, like the famous Sjusjøen Resort, gives visitors plenty of opportunities to enjoy one of Norway’s most popular winter destinations. Visitors will also want to take some time to visit the many landmarks from the 1994 Winter Olympics, as many of the Olympic skiing and skating arenas are still in use. Add a rich line-up of cultural centres and museums, such as the Norwegian Olympic Museum, and your visit to the region will be packed with wonderful winter experiences. 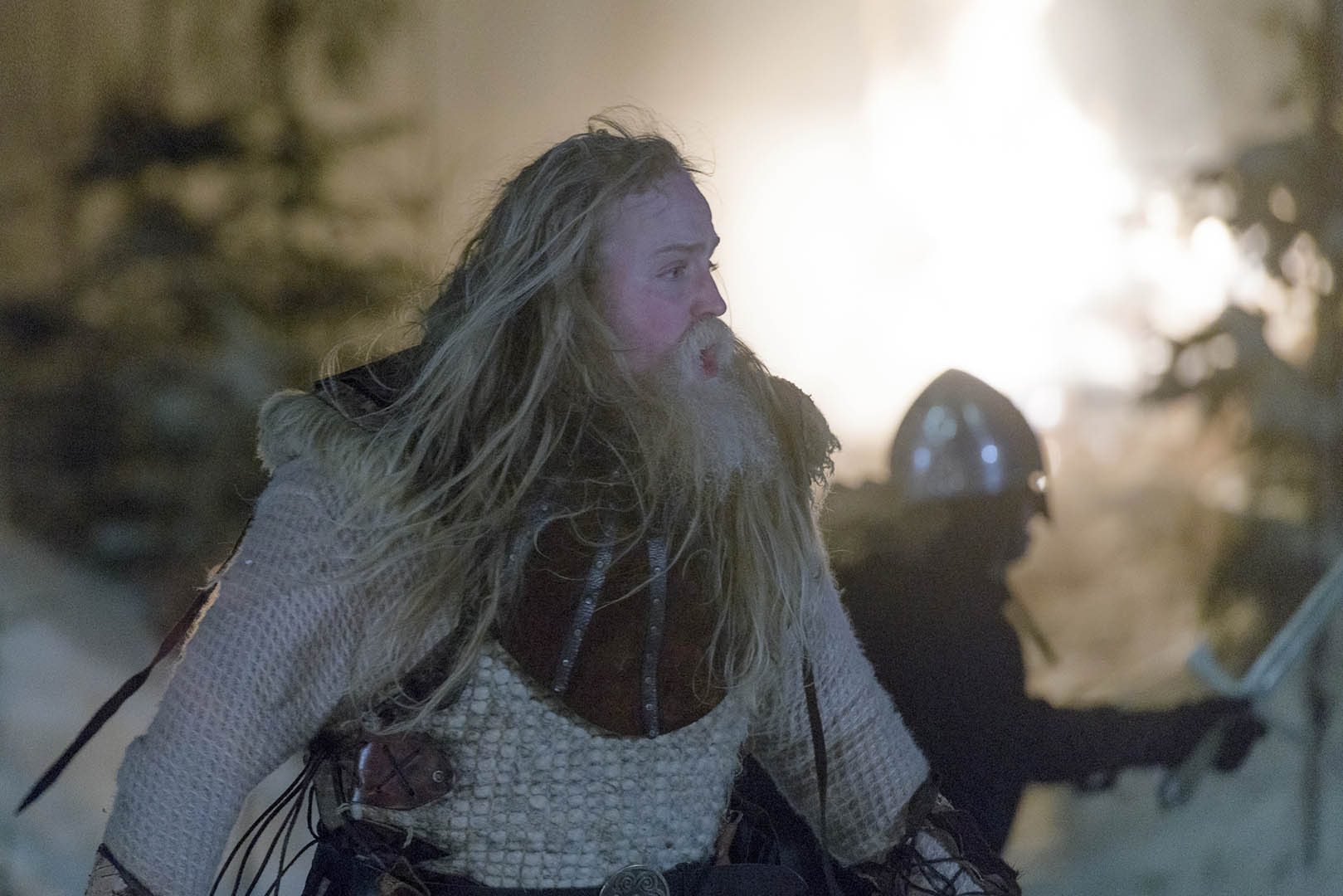 History buffs and Viking fans get their fill with this spectacular show.