Roslagen – the coastal countryside of Stockholm

Roslagen has a fantastic mix of peaceful nature, interesting history and culture in the small towns, thrilling adventures and delicious local produce. It’s a destination to visit throughout the year, just a short trip from Stockholm.

Visitors from around the world come to Roslagen for unforgettable experiences in the archipelago, the old ironworks, the small towns and, of course, the beautiful and peaceful nature. Whether you are a curious adventurer keen on plenty of activities or you want a more peaceful stay, gazing at the horizon with a good cup of coffee, there is something for you.

Roslagen stretches from Vaxholm in the south to Öregrund in the north. There are around 40 local museums and 40 medieval churches, many of which have unique paintings. This is claimed to be northern Europe’s treasure trove of art. Through the years, Roslagen has also been, and still is, an inspiration for famous writers, artists and designers, musicians and composers.

“If adventure is your thing, Roslagen will not let you down,” says Gisela Norén, tourism manager. “You can explore the caves by Gillberga burrow and Dannemora mine, as well as horseback riding, kayaking in the outer archipelago, and MTB biking. For keen hikers, the Roslagsleden trail and the Vikingleden trail will not let you down. And for even more extremes, there is an ultra marathon and an ultra MTB.”

Among the 13,000 islands in the archipelago, there are fantastic opportunities to enjoy boat trips, visits to islands and nature reserves, as well as cosy accommodation and great gastronomy. For instance, the island Ängsö became a national park in 1909 and is one of the oldest in Europe. The park was established in order to preserve a beautiful example of a traditional farm landscape with flowering hay meadows and wooded pastures.

Another island paradise is Lidö, a lush green oasis which has been selected for Zero Island, a sustainability project by a Finnish Energy company. The aim is to find solutions and contribute to Sweden’s goal of becoming climate neutral, free from fossil fuel, by 2045. You can explore the attractive Lidö Manor, dating back to the 1770s, with a working farm. Or visit Lidö Inn with a restaurant, a guest house and a youth hostel plus canoe and small boat hire.

You can of course visit one of the lighthouses in the outer archipelago, too, such as Söderarm lighthouse on Torskär. It is a listed monument and has been a lookout point since the Middle Ages. Or head for Örskär, the northernmost outpost of the archipelago. This magnificent lighthouse was designed by royal architect Carl Hårleman.

An interesting stop is Österbybruk, an industrial community in northern Roslagen. It has the world’s only preserved and still functioning Walloon forge. Here, you will find the typical structure that is often found in the Walloon ironworks, with the gentry living on one side of the dam and the labourers on the other.

Worth visiting is also Wira Bruk, a former ironworks site still in use today. This was Sweden’s first blade smith’s forge, founded in the 1630s. The ironworks was awarded the exclusive right to manufacture weapons for the armed forces for around 140 years. Wira Bruk has forges and red cottages alongside the lively river Viraån. Discover the former inspector’s house, which sells and displays decorative wrought ironwork, learn more at the museum in the alderman’s cottage, and regain energy in Wira Restaurant in the old court house. And don’t miss the historical music event Wira-spelen, which takes place one week after Midsummer!

“A must is Norrtälje’s charming wooden houses by the stream, which attract, for instance, Konst i Ån (Art in the Stream), an annual exhibition with art displayed in the water,” says Norén. “Go for a stroll in the centre with plenty of boutiques for design, fashion and local delicacies. And why not pay a visit to Norrtelje Brenneri, a distillery with guided tours and tastings?”

Or visit Öregrund, one of Sweden’s best-kept wooden settlements and the only town on the east coast where you can see the sun set in the sea. In addition to its many cliffs and beaches, there are a number of great restaurants by the waterside, two of which are managed by renowned Swedish chef Melker Andersson. And make sure to see Grisslehamn and the fantastic Albert Engström studio on a cliff by the ocean. Also located here is Sweden’s most modern spa hotel, with a view of the Sea of Åland. This, and much more, is waiting to be discovered in Roslagen! 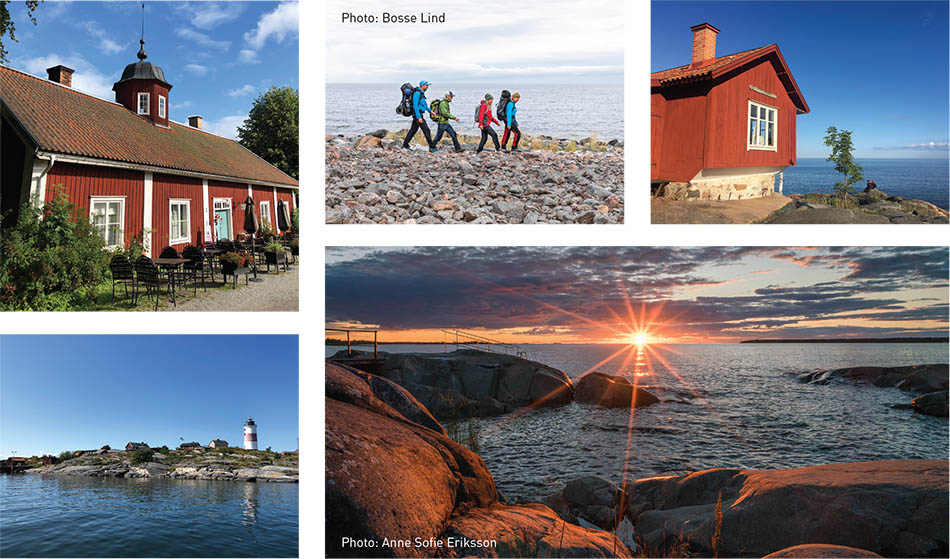 Trollhättan and Vänersborg: A landscape of wonders

Raseborg – close, yet so different